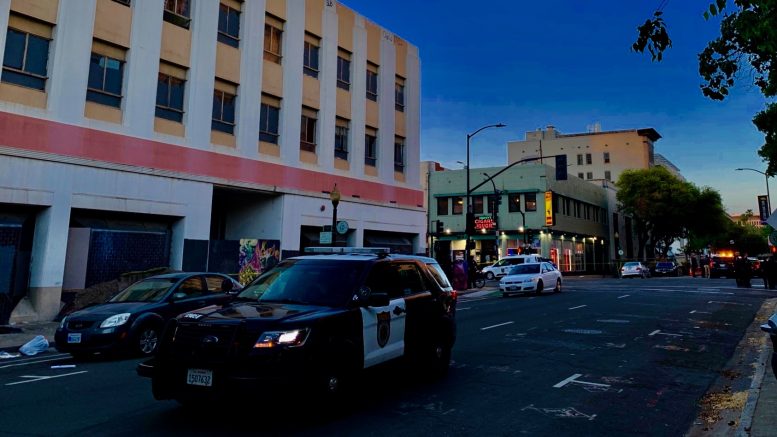 Sunday morning was like a bad dream. But not a person’s rough, restless hours in the dark, rather the horrible hallucination of an entire living city.

And like all nightmares that are hard to pull out of, it seemed most unsettling – most surreal – before the sun was fully on the horizon.

I remember how quiet it was then. I saw only a couple of reporters from local Television’s graveyard shifts. I caught sight of community organizer and youth mentor Berry Accius. It looked like he might have arrived as fast as the emergency teams. He certainly seemed more focused, and alert, and invested, than any member of the media army that I knew would soon converge in a kind of grand flanking maneuver of vans, cameras and tele-lens.

But what I mostly think about is the quiet wandering, the people just drifting in dazed circles around the perimeter. No one saying much. A few who actually call Downtown home were staring ahead before making intense eye contact with those around them – that rare, unspoken connection between strangers – and then slowly shaking their heads.

And the friends and family of the departed who were waiting thunderstruck and helpless, you could almost imagine that they might still wake up from this, somehow.

Hemingway said that things are “true at first light and a lie by noon.” But, to me, the lies felt palpable a lot sooner than that. By 10:30 a.m., the nation’s largest newspapers had tapped whatever contacts they had in Sacramento to do some emergency stringing for them, the media army had turned the corner of L and 10th into Camp Narrative – complete with a mess line that stretched from its crime tape to the nearest Starbucks – and vaguely worded but gravely toned “statements” were already starting to come in from our abundance of elected officials who warm seats inside the statehouse. I knew then what my inbox would look like over the next couple of days, the virtually unending pile of vapid word-salad that would keep lighting it up under subject lines like “Senator X releases statement about mass-shooting,” or “Assemblymember Y condemns Sunday’s tragic events,” or “Governor Newsom calls for a legislative bait-and-switch disguised as real-world action.”

Alright, that last one was phrased slightly differently.

That’s our answer for the people who were terrorized that morning. That’s what we instinctively muster from the awesome arsenal of resources held in the capital of the sixth largest economy in the world, when hundreds are mourning, and when the very concept of a downtown is put to the test – we come back hard with shabbily crafted statements pawned off as profundity.

Maybe the only remarks by late morning with any real value came from the Mayor, when he warned that “thoughts and prayers are not enough.” It was the closest that any politician came to breaking the third wall.

I don’t know what else to say. We were there. We wrote what we wrote. And, in my opinion, the “lie by noon” was there as well. And when I think back to what was true at first light, the lines I can’t get out of my head, more than any Hemingway quote, come from Christopher Nolan’s film “The Dark Knight.” The first, I suppose, is about the possibility of hope, when District Attorney Harvey Dent promises his traumatized city, “the night is darkest just before dawn.” That would imply we have the political stomach to see this for what it was. The other lines Nolan wrote in the film, which haunt me far more, come from what the Joker tells Harvey Dent later as he’s lying in his hospital bed: “Nobody panics when things go according to plan, even if the plan is horrifying. If I tell the press that tomorrow, a gangbanger will get shot, or a truckload of soldiers will be blown up, nobody panics. Because it’s all part of the plan.”

The homicide rate in Sacramento has been climbing and climbing for the last three years, though this force has fallen mainly on the city’s most-challenged and disinvested neighborhoods. But now, we have statements, and a supposed call to action. Sunday morning wasn’t part of the plan.

It was Saturday night: The shadow of death

Be the first to comment on "Editorial: ‘True at first light’"