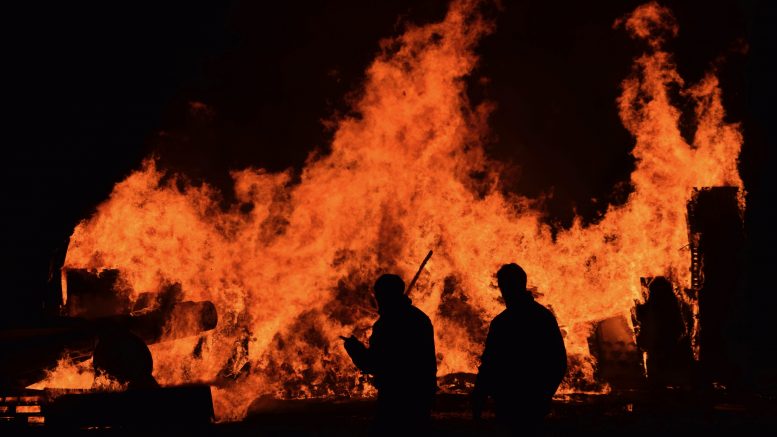 By Julie Cart for CalMatters

The report to the California Legislature found that the new Office of Energy Infrastructure Safety approved utility companies’ wildfire prevention plans even when they were “seriously deficient.” Included were plans by Pacific Gas & Electric, California’s largest utility, which was held responsible for sparking the state’s deadliest wildfire, the Camp Fire that killed 85 people in 2018.

While power companies are working to make their equipment more fire-resistant, neither the energy office nor the Public Utilities Commission has done enough to ensure that the companies prioritized upgrades where they are most needed — in high fire-risk areas, according to the 91-page report.

Since 2015, power lines have caused six of California’s 20 most-destructive wildfires, according to the report. Uninsulated lines and older transformers and other equipment are dangerous during high winds, when falling trees or flying debris can strike them and spark flames.

The energy office, which was part of the PUC until it was moved last summer to the Natural Resources Agency, has a broad charge to monitor the risk of utility-caused fires and issue safety certificates to power companies. The report cited instances when the office approved plans that it knew to be inadequate or vague.

Caroline Thomas Jacobs, who directs the new energy safety office, said in a statement:  “While we have some differences of opinion with the auditor, we welcome their input and are committed to continuously improving our operations. We stand behind the comprehensive and extensive evaluation of the wildfire mitigation plans conducted by our team of more than 25 engineers, scientists, firefighters, and utility experts.”

PG&E spokesperson Lynsey Paulo said the company was still reviewing the audit report but said its latest wildfire mitigation plan significantly accelerates “the undergrounding of powerlines in high fire-risk areas in 2020 and beyond.”

The company said it has installed more than 1,300 weather stations in high risk areas since 2019, as well as 153 high-definition cameras.

In recent years, consumer and ratepayer groups have regularly criticized efforts by the state’s largest investor-owned utilities — PG&E, San Diego Gas and Electric and Southern California Edison — to upgrade their equipment, and complained that the state’s utility regulator is not a vigorous monitor of the industry.

“Given the nightmarish wildfires that have become part of normal life in recent years, California taxpayers would be right to ask if they’re paying for utility watchdogs or lap dogs at the CPUC,” said Ken Cook, president of the Environmental Working Group, an environmental research advocacy organization that tracks wildfire issues.

The State Auditor’s Office criticized the PUC for not conducting thorough audits of work that companies said they performed. The PUC “does not use its authority to penalize utilities when its audits uncover violations,” the report said. Among its range of duties, the commission regulates privately-owned utilities and is supposed to ensure the safe operation of the state’s electric grid.

PUC officials said they agreed with most of the report’s recommendations. The commission will “establish a plan and timelines toward implementing the recommendations identified in the California State Auditor’s report,” according to a statement by spokesperson Terrie Prosper.

In a letter accompanying the report, Acting State Auditor Michael S. Tilden raised concerns about the increasing numbers of so-called public safety power shutoffs, when companies cut power during times of high fire risk. Tilden noted that between 2013 through 2021, the state’s largest utilities shut off power to more than 3.6 million customers during 67 power curtailments. There were some 600 unplanned power outages in 2020 alone, the report said.

Authorities are not doing enough to ensure that the companies prioritize equipment upgrades in high-risk areas, the report found.

In 2020, utilities reported they had replaced or upgraded equipment on 1,540 miles of lines. But as of last summer, there were 40,000 miles of bare power lines in high fire-risk areas, the report found.

“Even if all of the improvements they completed in 2020 consisted of replacing bare power lines in high fire-threat areas with covered or underground lines, they would have addressed only 4 percent of such lines,” Tilden wrote.

State law requires utilities to begin identifying sections of line that are regularly affected by power shutoffs. The report suggested the Legislature could strengthen this law by requiring utilities to identify what is necessary to prevent future power shutoffs.

In written responses included in the report, the agencies in some instances challenged factual assertions and in others noted that many of the suggested changes require legislative action.

The audit carries no authority other than to inform the Legislature. The process does include a status update, beginning in 60 days, to record responses and note any actions taken regarding the auditor’s recommendations.

Be the first to comment on "Audit: California utilities aren’t doing enough to reduce wildfire threats"