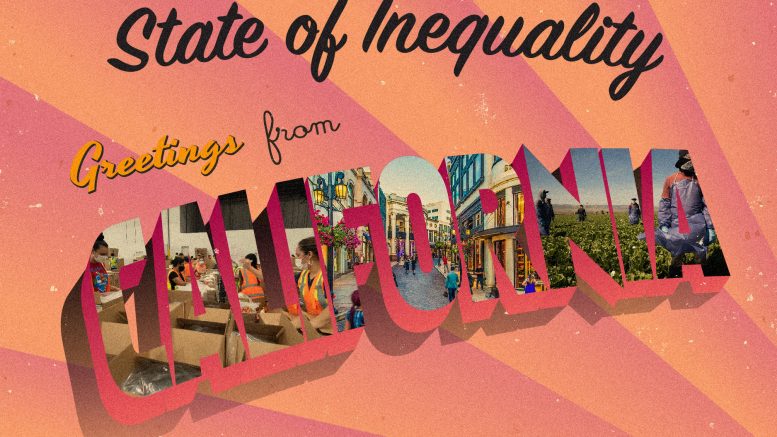 Exploring income inequality in the land of milk and money.

Without question, the pandemic pounded workers in California. The state lost a greater proportion of jobs than the nation as a whole during the worst of COVID-19, and even as the economic recovery continues, California’s jobless rate has leveled off since November at a steady 5.8% — a huge jump from the 4.1% figure that was recorded for seven straight months prior to the pandemic.

But there is another throughline to this story, and it goes well beyond the simple classification of “job.” For millions of Californians, having a job does not mean security. It doesn’t even mean the ability to afford basic necessities. That long established truth is ever more evident now, and it is independent of any other crisis.

The fallout from the virus strafed certain industries and cost jobs. But many of those were fundamentally terrible positions to begin with, and often it was because they paid so little that the people working them were still living in functional poverty.

The Great Resignation? “That was people walking away from lousy jobs,” says Roxana Tynan.

Tynan has spent more than 20 years with the Los Angeles Alliance for a New Economy, the past 10 as LAANE’s executive director. From her vantage point, the COVID crisis has pulled back the curtain on labor problems that aren’t new. “The pandemic has expanded consciousness about some of the worker issues that we’ve been seeing for a long, long time,” Tynan said. “We’re talking about stark levels of inequality.”

That reality lies at the heart of a new column by Capital & Main. In “State of Inequality,” we’ll examine in depth the forces that shape the labor market in California for better and for worse; the powerful industry and interest groups that work to defeat meaningful reform; the  consequences of working poor in the state; the employers and companies that are doing it right (or badly); and the politicians who either will or won’t strive to create lasting change.

The stakes are enormous. By every statistical measure, income inequality — both in California and the rest of the U.S. — has been growing steadily for 30 years, and its effects are corrosive across all sectors of society. Researchers say those living in more unequal societies suffer worse health outcomes and live shorter lives. They deal with mental and emotional issues in disproportionate numbers. Their children struggle more in school.

Income inequality depresses economic growth, too. Those who struggle to pay for necessities don’t spend on the big-ticket items that billionaires are selling, and they often incur debt they can’t pay off. Their children are denied the kinds of costly educational opportunities that might lift them to better and better-paying jobs, allowing them to contribute more to the economy. A cycle of near-poverty is produced, and research shows that it ultimately damages the entire society, dragging down the country’s gross domestic product.

In 2019, before the pandemic hit, more than a third of Californians were poor or near poor, according to the Public Policy Institute of California (PPIC) and the Stanford Center on Poverty and Inequality. Researchers at those two places relied on a real-world “California Poverty Measure,” which incorporates the actual cost of living in the state and a full range of family needs and resources, and determined that a family of four would require $35,600 per year to cover their basic needs.

At the same time, the state’s industries were adding jobs that didn’t come close to meeting that threshold. An economist for the state Department of Finance recently told the news site Cal Matters that, prior to the pandemic, most of the new jobs created in California paid $20,000 or less.

While COVID-era numbers are still being compiled, the unemployment rate suggests the result could be grim. Economic stimulus efforts, both nationally and at the state level, were likely the only thing that prevented more Californians from plunging into poverty, experts say; but those stimulus payments have dried up. What’s left is a job market that is still depressed and — just as it was prior to the pandemic — filled with positions that don’t pay enough to live on.

The result is a growing gap between rich and poor. During the past two COVID years, lower income Californians have scrambled to pay rent and show up for “essential” jobs — production, food service, agriculture, etc. — that were exempt from the state’s shelter in place orders, thus exposing them to the virus at disproportionate levels and putting their families at risk.

Those at the upper economic registers, meanwhile, recorded staggering gains and expanded their portfolios. In fact, the top earners and companies did so well that the state has seen two straight years of massive budget surpluses, the pandemic notwithstanding. California is the state with both the most billionaires and the highest rate of poverty, as determined by the U.S. Census Bureau’s supplemental poverty measure for the years 2018-20.

In a November 2021 poll conducted by the PPIC, nearly 70% of California respondents said the gap between rich and poor in their regions was growing, and 64% expected it to be worse by 2030. Those most in agreement that income inequality is worsening? The highest-income group surveyed: people making $80,000 or more annually.

The years of budget surplus provide an opportunity to expand the state’s safety-net programs, and universal basic income trial programs are cropping up in Los Angeles and other areas. But at its root, a core economic issue for California comes down to this: Can bad jobs be made better? Can workers be paid enough to escape poverty?

Too, it’s fair to ask how California, a state known for its progressive efforts in so many areas, could continue to abide so many of its people living poor. On some critical level, has the state experienced a failure of political will in the face of an obvious crisis? And who will break that chain of inaction?

Last year, a survey by United Ways of California found that more than 3.5 million families — one out of every three in the state — did not earn enough to meet their basic cost of living. That is nearly three times the number of Californians who are considered poor under long-outdated standard federal poverty measures. Yet many companies and large-scale employers continue to believe and act as if their workers should be able to get by on low wages, or that California reaching a $15 per hour minimum wage faster than most other states means all is well.

It is not well. The wealth divide, the gulf between those with the means to live comfortably and those whose work year in and year out puts them further behind, has become too enormous to ignore. We live in a State of Inequality. That reality has an urgency and an importance that demands inquisition, ideas and action.