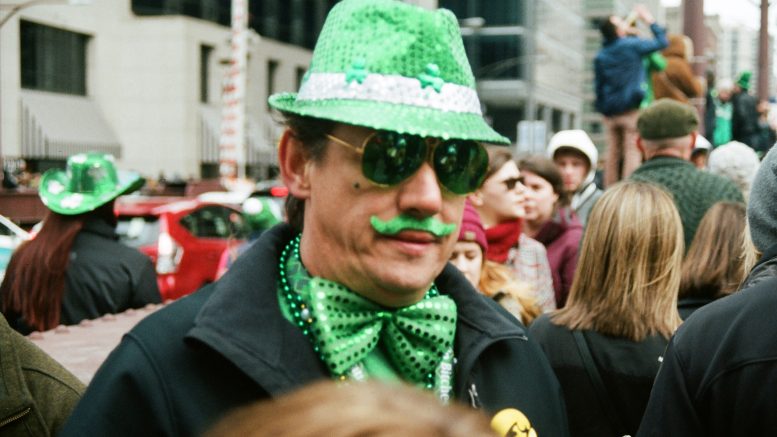 If the blockbuster turn-out for Sacramento’s recent Mardi Gras party in is any indication, Northern Californians are ready to be meeting in person again, as well as enjoying the special energy of crowds and celebrating life though loud, eager camaraderie. Few holidays can harness those forces like Saint Patrick’s Day, a spot on the calendar many people enjoy regardless of whether they have Irish blood in them. Ultimately, St. Paddy’s is a day that is about forging connections and strengthening bonds within a community; and given that, SN&R has a line-up of events to provide those opportunities for lifting a glass and yelling, “Sláinte!”

The place that’s hands-down the most traditional-looking Irish Pub in the region, Father Paddy’s, will celebrate the saint it’s associated with by hosting a big, street-side bash in Woodland. Doors to the pub open at 9 a.m., followed by a live music line-up that starts at 12:30 p.m. with Stout Rebellion. At 4 p.m., Blame the Whiskey takes the stage. The festivities culminate with Sacramento’s popular Irish band, One Eyed Reilly, playing at 7 p.m. Father Paddy’s, which is saddled in a historic building from 1903, and also has a vault filled with one of the best Irish whiskey collections in Northern California. The pub is located at 435 Main Street, Woodland.

A Celtic sing-along, music and Irish stew at the Fox & Goose Pub in Sacramento

This St. Paddy’s Day, Fox & Goose Public House will mark its 47th celebration of Ireland’s big day with music, food specials and a communal sing-along. Nestled in one of the city’s brick structures from the19th century, Fox & Goose is a popular, longest-running homage to the British Isles. It will kick off St. Patrick’s Day at 3 p.m. by serving Irish lamb stew in sourdough bowls, along with rustic helpings of corned beef and cabbage. The pub will also have some of Dublin’s best-known beers on draught, including Guinness, Harp and Smithwick’s, all of which can be drank when the pipe players come through the place. At 6:30 p.m., Irish folk singer patronage will pass out song sheets and lead a traditional group sing-along inside the pub. The revelry at Fox & Goose goes until 10 p.m. Fox & Goose Public House is located at 1001 R Street in Sacramento.

O’Mallys may have recently lost its founder, Bert “Mr. O’Mally,” but the Irish pub he started more than 25 years ago on Sacramento’s waterfront is soldiering on to help locals enjoy another four-leafed holiday. O’Mallys will offer a corned beef-centric food menu bolstered by a large supply Jameson Irish whiskey that’s just waiting to be poured. O’Mallys will also have a number additional Irish whiskeys on hand, including Slane, Tullamore DEW and the highly rated Redbreast. Freshly in for St. Paddy’s, O’Mallys has the additional option of Lost Irishman whiskey. Tripled-distilled in the Irish copper pot method, this spirit incorporates South African brandy casks, Australian tawny casks and Caribbean and Colombian rum casks into its aging process, making for some highly nuanced layers of spiciness within each sip of the stuff. O’Mallys is one of Sacramento’s long-running Irish pubs and is less than a block from Sean Finnegan’s Irish Pub, for those partiers wanting to do some Celtic -pub-hopping on the same street. O’Mally’s is located at 1109 2nd Street, Sacramento.

The Boxing Donkey Irish Pub has been throwing parties for St. Paddy’s Day for 14 years, and this emerald-green go-around will be no exception. This Roseville fixture plans to host an entire day of live music, along with an outdoor beer garden, clover-inspired cocktails and plates of corned beef concoctions to-go. The entertainment includes the SAMMIE-award winning Celtic group Pipers Folly, along with Jayson Angove, Josh Ward and the 90s cover band, Total Recall. This 21-plus, cover-charged event starts at 8 a.m., with the bands kicking off two hours later. To get the low-down on “the Donkey’s” whole history as a pub, read SN&R’s recent feature on how the pub has been keeping up its fightin’ Irish spirit. The Boxing Donkey is located at 300 Lincoln Street in Old Roseville.

Peaky Blinders themed party at The Pour Choice in Auburn

Auburn’s popular hybrid of an indie coffee house, a beer tap room and a foothills wine bar has been – true to form – thinking outside the box when it comes to this St. Paddy’s Day. The Pour Choice will ring in the day with a Peaky Blinders themed party, in which employees will show up looking like well-groomed Irish gangsters. Guests are encouraged to do the same. Peaky Blinders was a recent hit for BBC. It’s loosely based on real events involving an Irish crime family that did business in Birmingham, England, amidst the fall-out from World War I. Whether the Pour Choice’s patrons show up looking like shamrock-shaded mobsters or not, the café will be serving Irish stouts and corned beef sliders on its outdoor patio, as well as the Irish beer cocktail The Black and Tan, which involves layering pale ale over a traditional Dublin porter. The St. Paddy’s action runs from 1 p.m. to 9 p.m. The Pour Choice is located at 177 Sacramento Street, Auburn.

Loomis Basin Brewing will celebrate its own spin on Irish-style beer by releasing its special St. Paddy’s brown ale at 3 p.m. The brewery will pair that fun with a live performance by The Albertson Duo, which combines Megan Albertson’s searing vocals with multi-instrumentalist David Albertson’s one-man band dynamism, the two managing to sound remarkably like a four or five-member group. The Albertson Duo plays creative takes on cover songs and takes a lot of requests from their audiences. For those purchasing Loom Basin’s St. Paddy’s Day apparel, their first pint of the special brown ale release is included in the cost. Veteran customers wearing previous year’s St. Paddy’s apparel from the brewery get $1 off their first pint. Loomis Basin Brewing is located at 3277 Swetzer Road in Loomis (not to be mistaken for its tasting room/gastro pub on Loomis’s main street).

Irish food and wine pairing at Convergence Vineyards in Plymouth

Convergence Vineyards, which is tucked in a green, rolling patch of hills that resembles Ireland in the springtime, will host a weekend-long event in its Plymouth tasting room that pairs Tempranillo wine with Guinness Irish stew. The steaming bowls will be made from co-owner Jamie Concannon’s own home recipe. The event also features barrel-tastings for Convergence’s up-and-coming wine selections, beginning at 11 a.m. The Irish stew and Tempranillo pairings happens between 1 and 3 p.m. Convergence Vineyards was highlighted last March in SN&R’s feature on the top tasting room destinations for port wines during winter weather. The winery is located at 14650 State Highway 124 in Plymouth.