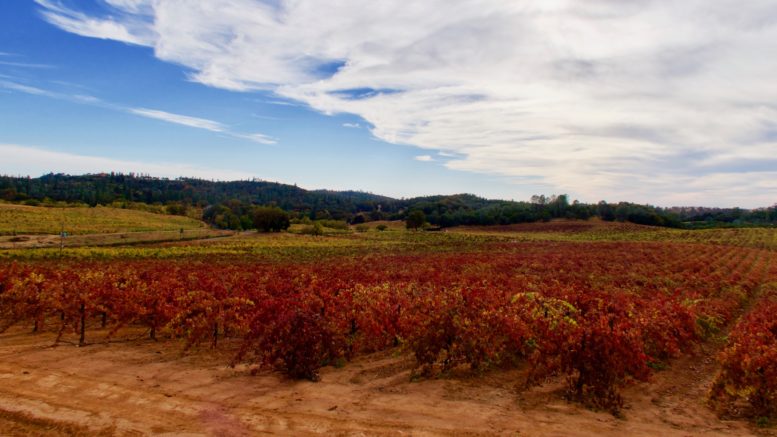 The skies change over vineyards in Amador County. Photo by Scott Thomas Anderson

When the wind’s fierce and the rain’s cold, those are the perfect evenings for the most devilish kind of wine indulgence.

Western Iberia’s vino tradition is known as Port: if it’s made with care, drinking it is nothing less than a sweetened, after-dinner extravaganza. Bottles also have a strong alcohol content and will pack a calming punch for our winter of discontent.

Amador County, just 40 miles east of Sacramento, is home to a cadre of vintners with a gift for making this dark, satiny sin in a glass. A truly great port will stir the tongue, warm the blood, lighten the head – and send a glow down the spine that makes the bleak, chilly grayness start melting away.

Now that Amador’s wineries are open for outdoor tasting, Sacramentans can bundle up and sip vino in the rolling ranchlands as they grab some port for the season’s end.

The first small-scale wineries in Amador were started around 1854 by Italian and French immigrants who’d ventured into the gold fields. The territory’s soil and climate were almost identical to the Old-World vineyards they’d once known, so grapes from the Rhone Valley to the edge of the Mediterranean started flourishing there. By the Civil War, the north half of the county was dotted with family-run wineries and cattle ranches. Prohibition eventually changed everything, forcing most of those grand, gnarled vines to be uprooted or abandoned. In the late 1970s, a number of long-time Amador families decided to get back to their winemaking roots. Today, the area features more than 43 tasting rooms scattered across its gliding hillsides. And many of them remain small, affordable and locally-owned.

Experts consider Amador one of the top four places in the world for harvesting Zinfandel grapes, as well as the best spot anyway for growing Barbara outside of northwest Italy. But the ranch-planted winemakers who live there have also mastered the style of Portugal’s fortified dessert wine, better known as port. Two personalities with proven skill on that front are Stephen and Jamie Concannon, the husband-and-wife duo behind Convergence Vineyards in Ione.

Convergence’s 2012 estate Port is made from Zinfandel that’s grown in a pastoral, sloping, creek-side vineyard. Jamie describes it as “a chocolate-lover’s best companion.” One sip backs her up. This port tastes like candy-coated electric velvet in the mouth.

Stephen and Jamie were the first vintners in Amador to introduce regular wine and ice cream pairings, which their 2012 port quickly turned into a major hit. Due to COVID-19, the couple has temporarily moved their tasting area next to the huge roll-up door for their production warehouse, a spot that still offers plenty of views on the sweeping countryside.

“This is part of taking it outdoors, which is what Amador County is allowing its wineries to do,” Stephen explained. “But people can also just order wine by the glass and sit by themselves at one of our picnic tables, which are pretty spread out and all have views. It’s about whatever makes someone feel comfortable.”

Another example of a classic California port is found at Shenandoah Vineyards. Named for the rolling quilt of oak woodlands it overlooks, the Shenandoah Valley, the place has a charming tasting room, high panoramic views, and vino that strike a nice balance between quality and affordability. It also has port. Lots of it.

Shenandoah Vineyards’ 2016 Vintage Port is an ultra-smooth, honey-dripping pour that can enliven any rainy evening. Crisp and cloying, it’s a fortified blend of several grape varietals, not to mention a pairing nirvana for Black Forest gateau, Crème Brûlée or double-chocolate bread pudding.

Of course, there’s no way to talk about Amador dessert wines without mentioning Dobra Zemlja’s “Kikas.” Dobra Zemlja is owned and operated by Milan Matulich, a Croatian immigrant known for conjuring the boldest, more-forceful and alcoholically potent wines in Shenandoah Valley. This is partly because he ferments everything with completely wild yeast. A typical red by Milan is what wine tasted like back when Jesus drank it. His company’s motto, “no light weights,” is not a chute marketing trick, it’s a genuine warning.

Dobra Zemlja’s unfined, unfiltered port known as Kikas is no exception to the sentiment. This hot fusion of syrah grapes and blowtorch grappa has reached legendary status in Amador, and its most recent vintage may be in class all its own. It’s deeply flavorful and simmering from its brandy cut — a dripping, crimson desert that literally glows on the tip of your tongue.

For obvious reasons, Dobra Zemlja’s tastings aren’t being held in its rustic wine cave at the moment. But the property’s outdoor setup still has the feel of pure country, surrounded by a shady oak and eucalypts bower, and a ranch pond stitched in tall grass and reeds.

“We’re really fortunate to have a lot of outdoor space right by our tasting room,” said assistant winemaker Laura Irmer. “Still, with everything going on, group-sizes are limited. So, if it’s more than a couple people dropping by, we highly, highly recommend making an appointment, which you can do by phone or by email … People are starting to come out again.”

Dobra Zemlja is located at 12505 Steiner Road in Plymouth.

Finally, a port that should be on everyone’s winter sip list is the Sobon Family Estate’s 2018 Zinfandel Port. In Amador, the Sobon name is synonymous with preserving history, making quality wine and selling bottles at working class price-points. From its array of stellar zinfandels to its old school primitivo, the Sobon brand never seems to disappoint.

That’s especially true of the estate port. It’s brisk beauty in a bottle – a tangy grape sugar-drop with elements of molasses and the quickest hint of heat on its tail. It’s everything that a port should be.

The Sobon Family Estate currently offers outdoor tasting and is located at 14430 Shenandoah Road in Plymouth.

The bitter winds may still be blowing, but locals can banish it all away by the fireside with copious amounts of port. It’s fortified wine that fortifies the spirit – and continues to prove the most mischievous drinking options are also the sweetest.