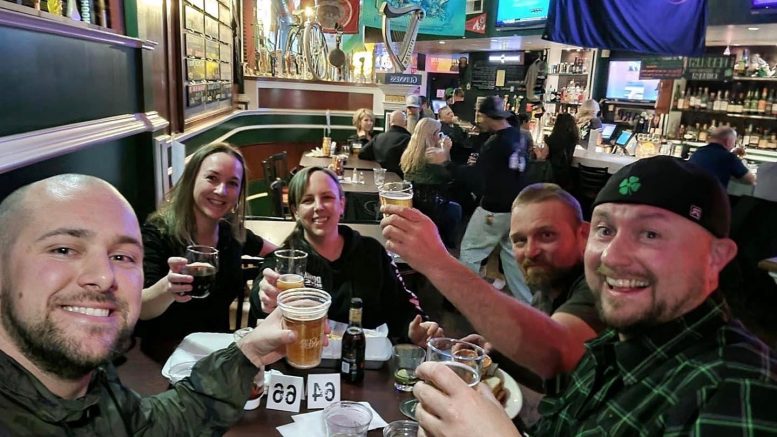 The Boxing Donkey remains one of the area's most popular Irish pubs. Courtesy photograph

There have been changes of late to the region’s pub scene, but locals who love celebrating its Irish-American heritage know one thing for sure: There will always be a major St. Paddy’s party at The Boxing Donkey in Roseville. Green beer, blaring bagpipes, live Celtic bands – ‘The Donkey’ has been a tried-and-true fixture near Sacramento for 14 years. More than anything, it remains the very definition of a great neighborhood pub.

On March 17, the Donkey will try to outdo its own four-leafed throwdowns of the past, hosting an entire day of live music, along with an outdoor beer garden, clover-inspired cocktails and plates of corned beef concoctions to-go. This 21-plus, cover-charged event starts at 8 a.m., with the bands kicking off two hours later. It’s a day meant to prove that, after two chaotic years for all pubs and restaurants, The Boxing Donkey is still on its feet, and still swingin’ – and still proving the Emerald Island’s proverb “the older the fiddle, the sweeter the tune.”

Why an Irish bar in Old Roseville? Historically, immigrants from “the Land of Blood and Horses” were no strangers to this section of rail line. Starting in 1845, the desperate famine ships brought them to East Coast cities like Boston and New York. Twenty years later, Sacramento businessmen brought them out West to lay tracks for the Transcontinental Railroad, which was gaining momentum in Roseville and Rocklin as its workers braced for challenging the granite mountains across the Sierra.

In Roseville, the Irish saw their immigrant dream settled into a vision of squealing boxcars, secret saloon tunnels and drink-thirty men often hiding from the Women’s’ Temperance League. The Barker Hotel is a holdover from those forgotten days; and the Boxing Donkey Irish Pub in its belly is a tribute to the shamrock side of city’s lasting memories. Today, it’s one of the only Celtic havens in greater Sacramento where patrons drink beer and whiskey while sometimes listening to Irish-punk and Gaelic-roots music on the radio. It also serves pub cuisine that’s so in-demand it might be, as the Irish say, “a double-dose of original sin.”

A good time to visit The Donkey is on a midweek afternoon as daylight pours through the high, arched window of what was once the doorway to Charles Barker’s hotel. The sun slides from a framed Roseville fireman’s jacket to a green flag for Jameson Irish Whiskey: The engine jacket — hung across from the bar’s emerald fireman’s helmet — has the pub’s name embroidered across its back. The establishment boasts other classics of Irish ambiance: A line of Guinness flags drape down from its ceiling; Magner’s hard cider is fixed on-tap; an array of Paddy’s whiskey bottles line the walls. Like the best timeworn taverns, it hints at another era. Old Town Roseville is still embedded in the railroad switchyard that the Irish helped build. The rougher parts of those memories remained vivid back when the Barker Hotel first opened in 1910. The Boxing Donkey projects that legacy both through the pub’s spirit – and Old Roseville’s enduring claptrap of tired wood and stone.

The Donkey also has a modern Irish-Yankee feel that often includes its stereo blasting the Celtic crunch of “Streams of Whiskey” by the Pogues, or the roving renegade touch of “Whiskey in the Jar” by the Dubliners. On some afternoons, you’ll sip Guinness as its speakers play “Shipping Up to Boston” by Dropkick Murphys. Other days, you’ll down Tullamore DEW as the manic marching of Scruffy Wallace’s bagpipes starts honking through the bar’s cavern. Over the years, when it comes to live music, the Donkey’s made a habit of bringing in Sacramento up-and-coming Irish bands like One Eyed Reilly. That group continues to grab audiences with songs like “Tipperary Blood,” a speed-spoken drinking anthem that’s thrust along by its trotting bass-line and quick, irreverent violin slashes. This Saint Patrick’s Day, it will feature another popular Celtic group from the area, Pipers Folly. The 2020 winner of SN&R’s SAMMIES for Best World Music, Pipers Folly brings a muscular flare to Irish folk music. The band’s St. Paddy’s show will be part of a four-act event at The Donkey that includes Roseville’s own Jayson Angove, Josh Ward and the 90s cover band, Total Recall.

But while fans of rocking jigs can usually get their fill at the Donkey, the everyday draw for foodies is what’s happening in the kitchen. One of the bar’s stellar dishes is its St. Patty’s Melt, a burger on thin, toasted Rye, covered in hot jack and cheddar cheese, caramelized red onions and a splattering of Thousand Island dressing. One bite reveals how its beef juices flow into tangy accents, the popping cloy of onion and the dressing’s sweet and sour pinch, all held together by the countering dryness of the Rye. It’s a real-deal taste sensation.

Another must-try at The Donkey is its Irish Egg Rolls dish. These hand-wrapped hybrids of corned beef, cabbage and jack cheese yield a golden-flaked flavor combination fusing cool meat and savory nuances, the package excellently accented by the pub’s signature Donkey sauce. But beyond such innovations as the Irish Egg Rolls, or the Irish Rueben Fries – corned beef, sauerkraut, cheese and Thousand Island dressing on a bed of fries – The Donkey’s kitchen still cooks-up tasty takes on pub standards, especially its flavorful shepherds pie and Guinness-battered fish and chips.

The Boxing Donkey’s co-owner Joe Tucey says that new customers are often pleasantly surprised by the food, and encouraged that the pub’s main mantra in the kitchen is “fresh, fresh, fresh.”

Fresh – with a little bit of the Irish pluck when it comes to experimenting.

Co-owner Kendl Schubert said that The Donkey will probably, in a few weeks, bring back one of its longtime legends, the Spicy Buffalo Mac and Cheese. More Irish in attitude than heritage, this bowl had some diehard fans: It was chalked full of cavatappi pasta piled in hefty Buffalo chicken chunks, large bacon bits and sharp globs of blue cheese. It dared anyone looking on it with its massive corkscrew noodles glowing titian with spices – and one fork motion showed how drenched it was in clinging, stringy layers of cheese. The whole concoction always appeared dangerous, yet there was a kind of perfection to its gradation of tastes and textures.

“The menu changes out sometimes, and dishes like that will come off with the weather, and then eventually be back again,” Schubert mentioned. “I think that will be back in March.”

Before that happens, The Donkey will show off more of its kitchen chops at its Saint Patrick’s Day party. As the bands play, it will keep the action going with a limited menu of corned beef tacos, corned beef nachos and bacon clam chowder. In past years, these dishes, which are perfect for carrying in one hand so that a sloshing Guinness can be in the other, have proven a big hit.

The Boxing Donkey first opened in 2008. It has stayed relevant with its big Saint Patrick’s Day parties, as well as the bar’s constantly shifting – but always interesting – specialty cocktails. Additionally, its shelved with some of the better Irish whiskeys on the American market, including Slane and Redbreast. And it keeps its neighborhood feel: From auto mechanics in oil-brushed work shirts to lawyers in tailored suits, the Donkey’s clientele may be diverse, but it always centers on smiling in the pub’s relaxed atmosphere as the libations flow. This part of Roseville has had its rail-side bar hubs since the 1880s, and some things never change.