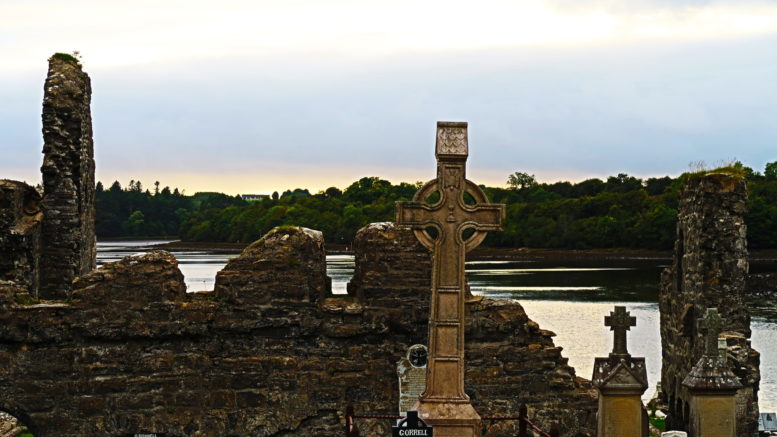 The ruins of an abbey in Donegal, Ireland. Photo by Scott Thomas Anderson

The Dublin novelist Frank Delaney wrote, “I liken Ireland to whiskey in a glass – a cone of amber, a self-contained passage of time, a place apart, reaching out to the world with sometimes an acrid taste, a definite excess of personality, telling her story to all who will listen.”

The atoms of Delaney’s homeland are spread through some 30 million Americans, many of whom will celebrate that connection today on St. Patrick’s Day. Here’s a playlist to keep Ireland’s landscapes, people, poets, dreamers and drinking traditions close to the heart.

“Thousands Are Sailing” by The Pogues: I once saw someone in California share this song on Facebook hours before they underwent a major cancer surgery. That’s because it’s a sprawling meditation on Irish immigrants sailing into the unknown. It’s also a homage to how those starving famine refugees began to shape America. Written by the late guitarist Phil Chevron, and sung with a weary intensity by Shane McGowan, the song finds the Pogues’ punk energy wrapped in a pure love of Irish folk music. But it’s Chevron’s lyrics—captivating and emotionally devastating at the same time—that shine the most.

“Finnegan’s Wake” by The Clancy Brothers: The first time I saw a “Trad session”—or musicians jamming with Celtic instruments—I was in a small pub on Ireland’s Wild Atlantic Way. That’s when I learned how intoxicating it is to hear mandolins, accordions, fiddles, tin whistles and Brosna Bodhrán drums all playing near a fireside. When it comes to capturing the spirit of a Trad session, The Clancy Brothers remain one of Ireland’s standard-bearers. Their take on “Finnegan’s Wake,” an old saloon song about resurrecting a corpse with whiskey, is all charm and Dublin nostalgia.

“Whiskey in the Jar” by the Dubliners: Luke Kelly might be Ireland’s most beloved singer of all time. His unforgettable voice had an earthy grace and touch of hardened hunger. Kelly died in 1984, but he left such an impression on the Irish that many still wander into the Victorian majesty of Glasnevin Cemetery to visit his grave. I was introduced to Kelly and the Dubliners while listening to the band Stone Cold Sober perform “Whiskey in the Jar” along the River Liffey. They were good, but urged me to check out Kelly’s driving, devilish take on this classic.

“Van Diemen’s Land” by U2: It’s probably illegal to make a playlist from Ireland without including the most famous band it ever produced, U2. This sad, evocative ballad is sung by the band’s lead guitarist, The Edge, rather than Bono, and it tells the tragic story of 19th century Irish rebels who were sent to prison colonies in Tasmania. Released in 1988, it still invokes a lonely and beautiful kind of trance.

“Come Out You Black and Tans” by Paddy Reilly: This angry anthem about British paramilitary men—the so-called Black and Tans, who clashed with the IRA in the 1920s—is part of a rich tradition of Irish rebel songs. Here, Dublin balladeer Paddy Reilly offers a galloping version of the fight tune, which he sings from start to finish with an urgent, salty flippancy. It will make you want to break your Guinness glass and punch the nearest oppressor in the face. Some singers in Ireland won’t perform it for fear of offending English tourists who might be in the pub. But those of us in California have enough cover to blast it as loud as we want on St. Paddy’s Day.

“Ode to My Family” by The Cranberries: What can you say about the searing voice of Dolores O’Riordan, who recently passed away at the age of 46? She was raised near the same city of Limerick that inspired Frank McCourt’s gut-wrenching book Angela’s Ashes, yet O’Riordan’s songs tackled its ailing austerity with such a commitment to art that her memories nearly glow. The Cranberries are now a cultural touchstone in Ireland, and it’s partly because of that mix of silk and raw emotion O’Riordan brought to the world in songs like “Ode to My Family.”

“Danny Boy” by Shane MacGowan: If you really want to get lost in the pain of “Danny Boy,” try listening to it through the shot-out, smoke-cut, whiskey-singed voice of Shane McGowan. He recorded it after The Pogues kicked him out for allegedly being a hopeless wreck settling into a booze coffin. The song wound up on an album by Shane McGowan & The Popes called, “The Rare Oul’ Stuff.” And it is rare indeed: Harsh, hurting and sung on the way to hell.

Scott Thomas Anderson is also the host of the ‘Drinkers with Writing Problems’ podcast, the first episode of which was written and recorded in Ireland.

Be the first to comment on "Cuts from Celtic survivors: A hard-drinkin’ playlist to put Ireland on your mind and in your glass"