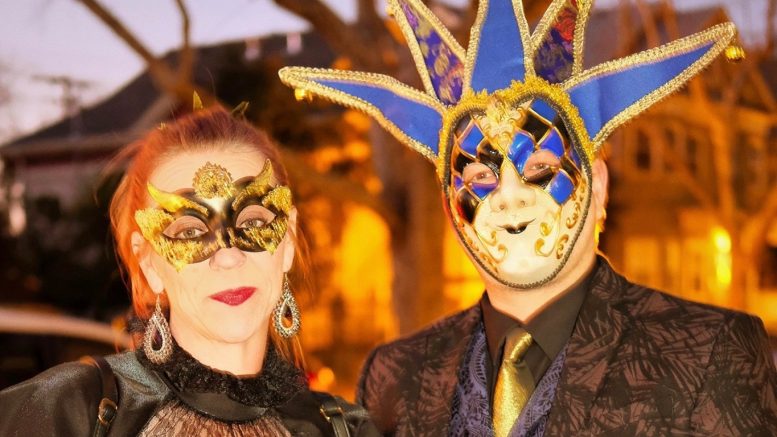 The only true Gothic gaslight in Sacramento flickers in the winter shade as trumpets and trombones echo from a porch above it. Their snarling, sinister swing is blasting from a set of speakers, Tom Waits fronting the sacred guardians of New Orleans culture – the Preservation Hall Jazz Band – as their improvised ensemble falls into a buzzed kind of bliss playing “Tootie Ma is a Big Fine Thing.” Past the door, the city’s Vampire Queen is moving by a jeweled skull, some witch and voodoo totems and a piano draped in Mardi Gras beads that gleam in the early sun.

Shannon McCabe is having another fun morning; and she’s getting ready to connect her hometown to the Crescent City, a place many artists call their “spiritual home.”

The crumbling, above-ground cemeteries of Louisiana, with their old oaks ornamented in Spanish moss, have long been an American symbol for celebrating life through the presence of the dead. But those crypts along the bayou have also evolved. Starting with the novels of Anne Rice in 1976 and continuing with the mysteries of Charlaine Harris in the 2000s, the Creole, Cajun and Antebellum corners of Louisiana ultimately became known for a southern vampire legacy.

McCabe, Sacramento’s mistress of fang fandom, never lost a beat when it came to incorporating that phenomenon into her monumental parties.

The music that’s now drifting through McCabe’s snug craftsman home in Curtis Park switches to Trombone Shorty and James Andrews’ “Ooh Poo Pah Doo,” a southpaw-swipe of savage street jazz flowing effortlessly from two of the Treme’s native sons. McCabe slips into her kitchen to grab a New Orleans King Cake she’s been baking from the oven. With a guest hovering at her back, she opens the heat and light to discover the King Cake has fallen victim to an American Horror Story: Its green, gold and white layers have collapsed and melted onto sharp, broken shards of glass – the fragmented mosaic of an explode plate below it. Whatever became of the plastic baby hidden inside the cake is a fate too terrible to even think about.

So, there are still some elements of the Big Easy that McCabe is learning to master; but overall, she’s more ready than ever to host her annual Mardi Gras Masked Ball at Harlow’s. The event goes down Saturday, March 12 at 6 p.m., with a Second Line parade around Marshall Park preceding it at 5:30 p.m. That marching madness ends with a welcoming voodoo ritual inside the club. Tickets can be found here. For McCabe, it’s all part of a larger, ongoing effort to build community in Sacramento though indulging in unique style – and the occasional walk on the wild side.

“You’ll have that same kind of fun and sense of comradery that you have at Vampire’s Ball,” McCabe says, abandoning the decimated King Cake. “We really are a family at those balls. We may be a 400-deep family, but we are a family; and we try to give that to the new people who are coming – the people who don’t know us, because it’s not something they’re used to.”

This will be McCabe’s sixth time throwing her Mardi Gras Masked Ball. Over the years, she’s channeled elements of the Southern Gothic into her vampire balls: She thinks there’s a through-line into how this other annual event came into being, particularly around her frequent trips to Louisiana. After all, it was spending time in New Orleans that led her to becoming close friends with the veteran Mardi Gras float artist Ricardo Pustanio.

“The Vampire Ball kind of spurred Mardi Gras, because I was always going to New Orleans in between Halloween and Fat Tuesday, and bringing back all these things, to the point where my friends from the Vampire Ball were always asking, ‘What’s all this cool stuff?’” McCabe recalls. “Finally, I started saying, ‘Let’s throw a Mardi Gras ball and I’ll show you.’ As far as actually doing it, not only has Ricardo taught me so much about Mardi Gras and the culture, he also introduced me to his best friend, the Voodoo Queen of New Orleans.”

She adds, “That’s literally who has shown me around Mardi Gras over there, and it’s allowed me to take some of the elements that I experienced and bring them here to Sacramento – everything from the music to a King Cake with a baby shoved inside.”

With that immersion in mind, McCabe is planning a Mardi Gras ball that will be a portal to Louisiana while still feeling quintessentially Sacramento. It includes an Acadian-flavored costume contest, the energy of which will be bolstered by Ana Maria Perales portraying the legendary Marie Laveau, the first historic Voodoo Queen of New Orleans, and Ren Fair veteran Steve Martinez portraying Papa Legba, the darkest of Haitian Voodoo spirits. The ladies from Lucky Box Club will be dressing up in full Brazilian carnival attire. Mardi Gras music will be blasting from famed Sacramento D.J., Bryan Hawk.

At 8 p.m., The Clemon Charles Band, which McCabe’s a member of, will be performing thematic covers and a few originals on Harlow’s main stage. Having played at the last Mardi Gras ball before COVID, Clemon Charles knows it draws the kind of crowd that gets him energized.

“I was jazzed,” he remembers. “And the culture at the event smacked of New Orleans, and the level of celebration you feel around a New Orleans’ party. And this year I think will be even greater.”

Following the Clemon Charles Band at 9 p.m. will be Sacramento’s A Death in Bloom, which plans to fill the club with a hefty hitting set of all-out dance songs.

“I’m hoping this is going to be the moment we really see live music come back,” says the band’s co-founder, Tate Bloom. “When it comes to being involved in Shannon’s events, she has cultivated an amazing audience over time, one that I’m very appreciative we get to be a part of.”

Tate’s wife, Elisa Bloom, sings and plays keyboards in A Death in Bloom, but also pulls double-duty on the keys in The Clemon Charles Band. That means Elisa will be performing virtually all night at the Mardi Gras event. For her, the way McCabe approaches a ball makes it all worth it.

“We’ve been working with Shannon since 2016,” Elisa recalls. “She’s so much fun. She makes it really easy to want to be there. She’s just very accommodating to all the artists she works with.”

In addition to the music and costume-heavy vibes, McCabe will also – as will all her parties – be bringing in rare and one-of-a-kind vendors, including Mardi Gras-themed makeup providers, pastie designers and candle and soap-makers. McCabe says that adding genuinely inventive vendors is another crucial element to the ambiance everyone involved with her galas is trying to pull off.

“Everyone’s been with me for so long, and my whole staff is just unbelievable,” McCabe notes. “A lot of my team is from fairs, and Burning Man, and all these cool, creative outlets; and so, they all come together and we have this kind of magic that happens.”

Scott Thomas Anderson is also the host of the ‘Drinkers with Writing Problems’ podcast, Episode 3 of which was written and recorded in New Orleans.