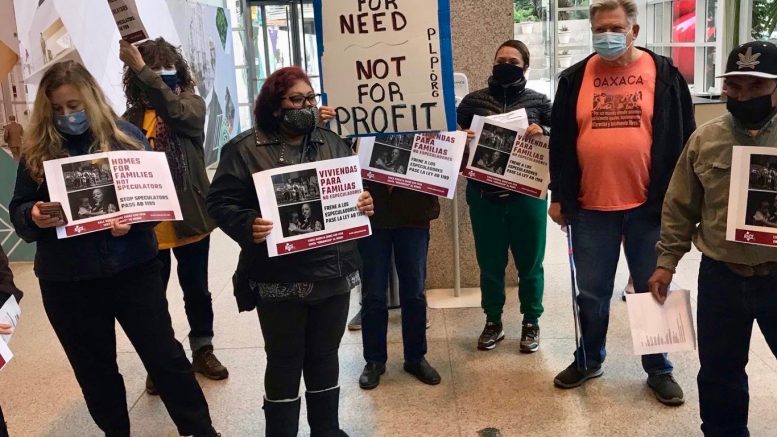 Tenants protest inside the headquarters of Blackstone Group, the largest corporate landlord in Sacramento County.

Last week, housing and poverty advocates descended on the San Francisco offices of Blackstone Group, a controversial real estate player that’s the largest corporate landlord in Sacramento County. Tenants were demanding that Blackstone stop rent-gouging while at the time allegedly deferring heath and safety repairs in many of its California units.

A number of nonprofits are also continuing to fight in Sacramento for the passage of AB 1199, a bill aimed at holding private equity profiteers like Blackstone accountable for their behavior during the 2008 financial collapse – and now during the pandemic.

The recent action at Blackstone’s San Francisco headquarters was one of several protests targeting the company on Dec. 9, including tenants converging on its property management firm in Los Angeles, FPI. Blackstone famously bought-up tens of thousands of homes in the region that were under water on their mortgages during the financial meltdown at the end of the Bush administration, absorbing them into an ever-expanding blob of rental properties on the north state’s map. Numerous houses in Placer and Yolo counties are part of the picture, while Blackstone has also earned the distinction of becoming the largest private property owner in Sacramento County, second only to the county government itself.

Blackstone has since faced accusations of being a distantly blocked-off, nebulously organized corporate landlord guilty of absentee cost-cutting practices within its maintenance practices.

Blackstone has not returned messages from SN&R on such allegations in the past, but those claims were what was driving the demonstrations against it last week. These actions featured testimonials from Blackstone tenants like Ann Marine McKellop, who says the cockroach infestation in her unit was so neglected by the company that she recently woke up to find a roach had burrowed into her daughter’s ear.

“It was horrifying,” McKellop recalled. “The cockroach infestation has gotten so bad it’s become a huge issue for our health and wellbeing. We now have the largest and wealthiest landlord on the planet, and they can’t ensure that we have basic habitability standards? It’s outrageous.”

One of the main advocacy groups organizing the protests was The Alliance of Californians for Community Empowerment, or ACCE. The group made sure to point out a recent trend, which has been documented by several journalists, involving Blackstone and other private equity firms and hedge funds relying on the plunder-playbook they used during the financial collapse, this time capitalizing on the economic fall-out from COVID to swoop in on even more property acquisition.

“Blackstone and similar Wall Street landlords have continued the predatory vulture strategy of taking advantage of the pandemic-induced economic downturn,” ACCE representatives said in statement. “In June Blackstone bought Home Partners of American for $6 billion, which will buy homes currently listed for sale to lease to tenants who wouldn’t be able to purchase the home themselves … In June Blackstone also bought a $5.1 billion portfolio of low-income housing (low-income housing tax credit properties) across the country from American International Group (AIG), some of which is in San Francisco, and in August they invested $300 million in Tricon Residential, a company which runs single-family and multi-family rental properties in the Bay Area, Central Valley … and Sacramento.”

A California lawmaker who’s been trying to stand in the way of a total rental takeover by Blackstone and its corporate counterparts like Black Rock is Assemblyman Mike Gipson of Compton. He’s the author of AB 1199, known as the Homes for Families Bill. That bill would put an excise tax on multi-million-dollar corporate landlords and then use the revenues to fund rental assistance and home ownership programs for working people. It would also impose new transparency mandates on real estate corporations, making it harder to hide the full scope of their monopolies through divisions and subsidiaries. Gipson had characterized AB 1199 as an anti-house hording law and estimates that it could bring in as much as $1 billion in revenues, annually. The bill is currently awaiting a hearing in the Committee of Taxation and Revenue.

This morning, ACCE’s executive director, Christina Livingston, told SN&R any legal efforts to reign in companies like Blackstone are imperative.

“Unless we pass bills like AB 1199, we risk worsening the housing crisis past the point of recovery,” she stressed, “putting homeownership out of reach for millions, while renters are increasingly pushed out by high rents, and too often forced to live on the streets. We must pass AB 1199.”