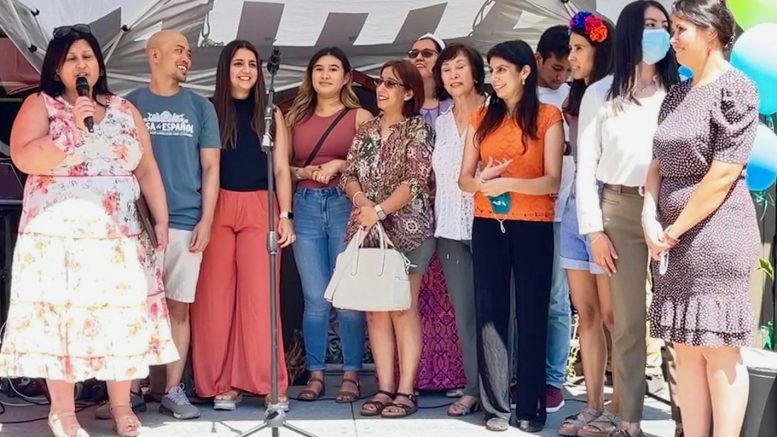 An event with the Sacramento Hispanic Chamber of Commerce. Courtesy photo

By Rose Vega and Erick Amaya

Hilda Rivera immigrated to the United States nearly 32 years ago. She was 19 when she came looking for work in hopes of sending money back to her ill mother who was still in Jalisco. After living in Orange County for a few years and meeting her husband, she moved to Sacramento.

“My children were able to grow up in better conditions than I was.” said Rivera.

According to new data from the federal Census, the Hispanic population in Sacramento County grew by 22% between 2010 and 2020, nearly double the rate of population growth for the entire county. About 375,000 Hispanic residents live in Sacramento – almost one in four people.

Cathy Rodriguez Aguirre, the CEO and president for the Sacramento Hispanic Chamber of Commerce, believes the population is growing due to job opportunities and a relatively low cost of living.

“There’s all these different pieces, there’s the affordability, the opportunities,” noted Rodriguez Aguirre, who’s ran the chamber for six years. “There’s also, when you look at the industries we are overrepresented in, one of them is construction. There’s a lot of construction projects out here [in Sacramento].”

Sacramento’s Hispanic chamber found 36% of construction jobs are held by Hispanics. The Bureau of Labor Statistics determined overall that the amount of Hispanics in the workforce increased from 8.5% in 1990, to 18% in 2020. Aside from financial gain, Rodriguez Aguirre said Hispanics could be moving here to join family members already living here.

That is the exact reason for Abram Mejia’s move to Sacramento.

“My father moved to Sacramento because my aunts and uncles lived here a few years prior,” said Mejia. “While, for my mom, most people from her hometown in Mexico moved here.”

Mejia, a social science major at American River College, said he was starting to see more Hispanic events before COVID-19. He had also noticed a lot more schools with Spanish immersion programs and English-learning programs for children that use Spanish as their primary language.

Sacramento State international relations major Daniel Rocha moved to the Capital Region from his hometown of Watsonville for similar reasons. He committed to Sacramento State to join friends already at the school – and to follow in the path of family members who had previously attended the campus. Some of his family live in Sacramento.

“It was some sense of familiarity with the area,” Rocha observed. “So, I felt comfortable enough moving out here on my own.”

Rodriguez Aguirre acknowledged Hispanics find a lot of success in Sacramento, but also barriers, as shown in the Hispanic chamber’s first economic report. One is underrepresentation in the technology industry. The report shows only 12% of computer and mathematical occupational fields are held by Hispanics.

“I think that as we get more mainstream within our culture, that we’re going to start to see an uptick of getting into jobs that were underrepresented in,” Rodriguez Aguirre remarked, “which appear to be where a lot of the jobs of the future are going to be.”

“Some members of the Hispanic community are underrepresented in that most people that are outside of the communities would try to lump in all Hispanic groups as one,” Mejia said. “There are many cultures that are not being fully represented because of it.”

Rivera, like Mejia, found a lack of resources available. Her sister and brother-in-law also live in Sacramento, but most of her family is still in Mexico. She primarily speaks Spanish and finds it hard to find work opportunities. She said government websites, and even grocery stores, often don’t employ Spanish-speaking representatives or don’t provide paperwork that isn’t in English.

Rocha said Sacramento needs to do more to cater to its 151,000 Hispanic residents.

“I feel that the city could do better in promoting Hispanic culture, for example, more [Hispanic] stores,” Rocha offered. “I have a hard time getting [authentic] Mexican products that I want to eat because there’s no Hispanic stores [near Sacramento State], and the stores that they do have are very far.”

Rodriguez Aguirre said she wants the Hispanic Chamber of Commerce to continue to study the success and barriers facing the community, as the data helps determine their agenda and decide where to focus their time.

“The Hispanic community is growing, you know, it’s growing rapidly,” Rodriguez Aguirre said. “So, it’s important for people to realize that this is a segment of the community that has always been contributing to the economy, they have always been making strides, now is in the best interest of everyone to figure out how you’re partnering with this community because that’s really what’s going to keep California strong.”