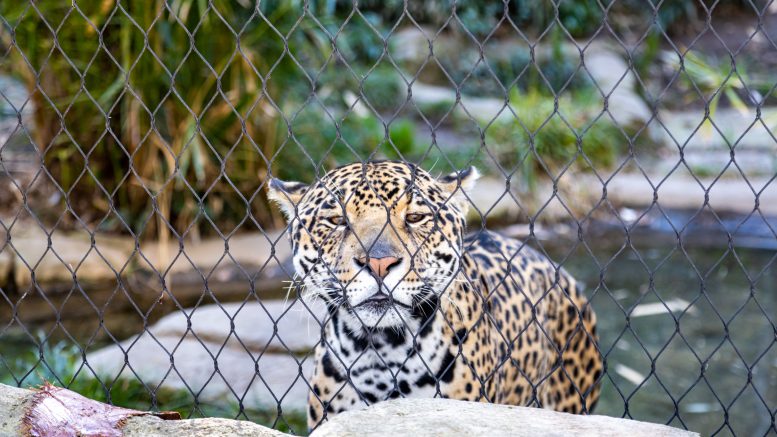 A leopard at the Sacramento Zoo. Photograph by Eric Brehm

Ashby lays into colleagues for lack of leadership, commitment to listening to the public – until it might be too late

For eight years residents and business owners in Natomas have been imploring City Hall to make good on its promise to replace the Sacramento Kings arena with a new entertainment amenity that would back-fill the neighborhood’s loss to commerce and quality of life. Now, Natomas is getting a controversial hospital that many in Elk Grove fought a political war to stop from coming to their city, and Elk Grove is working to poach the beloved Sacramento Zoo, which Natomas families were dreaming of having at the Sleep Train Arena site.

The saga goes back to 2013, when city officials assured the Natomas community that it would have a new “shovel-ready” replacement attraction before the lauded Golden 1 Center even came online. That guarantee has yet to come through, and some councilmembers have since acknowledged it as, essentially, a broken promise.

When it became clear in 2019 that the Sacramento Zoo needed to make big changes or completely relocate itself – or otherwise lose its accreditation – Natomas families rallied to push a major “We Want a Zoo” campaign. The district’s councilwoman, Angelique Ashby, tried to muster support for bringing the 94-year-old zoo to the Sleep Train site, though other councilmembers insisted on launching a feasibility study that included at least three other alternatives. Even as late as December of 2020, it looked like city leaders might try brokering a deal to build a state-of-the-art, animal welfare-oriented facility at either Sleep Train or North Natomas Regional Park.

Then, in June, it was announced that 35 acres of the Sleep Train property would be used for the teaching hospital that California Northstate University had been unsuccessfully trying to get approved in Elk Grove. City leaders were quick to herald the thousands of good-paying jobs they claimed the hospital will bring to Natomas, though an independent review of Northstate’s projections in Elk Grove calls those hopes into question.

Either way, the news got grim for Natomas in September when the Sacramento Zoological Society said it was entering into exclusive negotiations with the city of Elk Grove for a potential relocation.

On Tuesday night, Sacramento’s assistant city manager Michael Jasso told councilmembers they needed to decide what to do next. He also noted that there is a legal question as to whether the city of Sacramento owns the animals that are currently living in the zoo, as the zoological society did its own fundraising to acquire some of them.

“I know from talking to you, Mayor Steinberg, you have perhaps different priorities – I know the waterfront is very important to you, and we have limited resources,” Harris said. “But I have strong feelings about the zoo. I’d like to keep it.”

Referencing that some inside City Hall thought it was important to relocate the zoo in a predominantly low-income area, Harris added, “When I think about North Natomas Regional Park, the biggest objections to putt it up there were equity issues and travel issues; but I have to question, if this goes south of Elk Grove, how is the equity issue addressed? If people of color have to travel south of the city to get to the zoo? There is no public transportation that goes there right now … I want the councilmembers to say out loud if they’re OK with the zoo leaving our city and going to Elk Grove. I, for one, am not.”

District 4 councilwoman Katie Valenzuela said that, while she’d only had a year to help tackle the dilemma, her own meetings with the zoological society had left her not wanting to throw in the towel.

Steinberg tried to steer the conversation back to financial terms: The estimated cost of a world-class zoo that embraces the latest, most humane standards of animal care is between $70 to $170 million, depending on the location.

“Everything we do as a city council is a matter of choices,” Steinberg pointed out. “And sometimes we have to make very difficult choices … We do have to ask ourselves, honestly, where does the zoo stack up against all those other priorities? And we start from behind, because we don’t really have a good site.”

When it was time for Ashby, who’s been the most involved in trying to untangle the Gordian knot of the zoo’s future, to speak, she did not hide her frustration at how the process had played out. Ashby observed that, unlike 2019 when hundreds from Natomas residents flooded the council chambers, Tuesday’s meeting had virtually no callers. The reason, the councilwoman admitted, was that Natomas had given up on City Hall. Ashby implied such disillusionment was justified. She pointed out that several councilmembers, including Harris, had insisted on repeatedly studying the city-owned Bing Maloney Golf Course as a relocation site, even though it’s surrounded by FFA-controlled air space, which Ashby argues brought the mission to save the zoo to a crawl. She also noted an effective double-standard at play with the zoo, as the City has been proceeding as if the onus for raising hundreds of millions of dollars would be on the zoological society, which is a far cry from the approach the City took with the Sacramento Kings, Major League Soccer or even the Crocker Art Museum renovation.

“They actually over-perform other zoos their size, substantially,” Ashby stressed. “I know tonight it sounds like there’s a lot of support, but historically, when the zoo has shown up to this council, there has not been a lot of support.”

Ashby ended her remarks by saying that if Sacramentans wanted to blame someone for losing their zoo, they shouldn’t be looking at the mayor or the zoo’s team and supporters.

“The mayor and I, quite frankly, got tired of standing in front of hundreds of kids and families – which we’ve don’t multiple times – giving us drawings and pictures of animals, and asking us to save the zoo and save their memories, only to come back to this council and be told, ‘Hey, no, we don’t want to make the investment.’ I don’t blame the zoo for going to Elk Grove. My God, they showed more patience than Jobe with this council. They had no choice.”