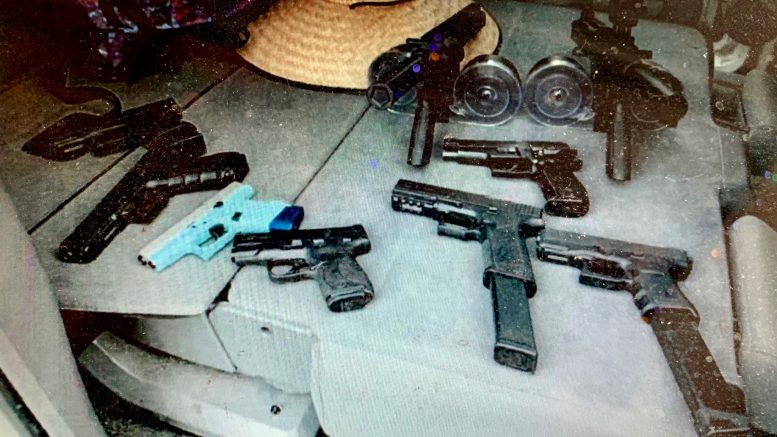 A collection of illegal guns the ATF took into evidence during its Tuma-Manriquez probe in the Sacramento area.

‘Ghost guns’ have been used in numerous mass-casualty events in California in the last nine years, while altered automatic weapons continue to inflict a tally of tragedies in neighborhoods suffering from gang violence. Federal agents with the Bureau of Alcohol, Tobacco, Firearms and Explosives – the ATF – have been launching operations in Sacramento aimed at getting those illegal weapons off the streets. Recently, working with detectives from El Dorado County, the ATF arrested two men on charges of trafficking machine guns and ghost guns from Florin Road to quiet corners of the foothills.

A newly filed affidavit revealed the investigation was triggered by a “mercenary paid informant” who’d been working with law enforcement, being arrested himself for a violent felony. Now, if Andrew Tuma and Juan Manriquez are convicted of federal gun-running charges, that will have come from the type of strange but common bedfellows that often pull dangerous weapons out of the crime world.

The investigation into Tuma and Manriquez first gained momentum on July 28, 2021, when detectives for the Western El Dorado Narcotics Task Force were allegedly able to get their confidential informant to buy an AR-15 from the former. Charging documents claim Tuma handed the informant a rifle that was converted with a full-auto switch. Gun reformers already attempt to characterize the AR-15 as an assault rifle – though, sold in its legal form, the gun can only fire as fast and as many times as someone can pull the trigger. The alterations that Tuma reportedly made to this particular AR-15, however, turned the weapon into a legitimate machine gun.

According to an affidavit filed by ATF Agent Ryan Oliver, his team’s confidential informant was a man that law enforcement had already been working with for a year. They considered him solidly “reliable,” the report says. The informant originally agreed to cooperate with Sheriff’s deputies after being arrested for assault: Once his debt was satisfied to the District Attorney’s Office and a county judge, he volunteered to continue being a law enforcement operative. Court filings say the man eventually became a paid informant for the ATF. On July 28, that informant allegedly met with 19-year-old Tuma in front of the Safeway in the small mountain town of Pollock Pines.

Prosecutors say that six days later Tuma met the informant in front of Safeway again, selling him another altered machine gun, along with some cocaine. Later that week, an El Dorado task force investigator named Michael Roberts was monitoring Tuma’s Snapchat account when he noticed a video the suspect had posted. According to the affidavit, Tuma can be seen in it firing a Glock-style pistol out the passenger window of his car near Sly Park.

“No one else appeared to be in the vehicle,” Oliver wrote of the incident. “Detective Roberts recognized the vehicle depicted in the videos to be Tuma’s blue Ford Mustang.”

As the probe morphed into a joint investigation between El Dorado detectives and the ATF, agents turned their attention to Tuma’s alleged gun “connection” – Manriquez. Court filings say that Manriquez, who’s from Antioch, sold a fully automatic .35-caliber pistol to Tuma in front of the Raley’s in El Dorado Hills. The cash used in the deal had come from the informant.

ATF agents allegedly orchestrated direct buys from Manriquez in August. One involved the informant meeting Manriquez on Sacramento’s Florin Road to exchange $8,700 in cash for three guns. Before Manriquez left, he reportedly said, “Nice doing business – anything you need, hit me up!”

The next deal involved an undercover ATF agent meeting Manriquez in another part of Sacramento County. The affidavit says this rendezvous happened in the back of a black Nissan, with Manriquez flanked by two mystery men that the undercover agent knew nothing about. Manriquez reportedly handed the agent a bag that was supposed to be filled with 11 high-powered guns. He was handed back $26,000 in cash. After the agent left the car, he realized there were only nine guns in the bag. Court filings say Manriquez wouldn’t answer his cell phone after that.

“Inside the residence, law enforcement officers found what appeared to be a firearms manufacturing operation,” Oliver wrote, “including partially complete firearms, firearm kits from Poymmer80, a company based in Sparks, Nevada that sells kits, firearm parts and tools for manufacturing and finishing firearms.”

Oliver’s description of the evidence is consistent with illegal “ghost guns,” which are self-manufactured weapons that are untraceable and often used by people who have criminal records or restraining orders against them – people who can’t legally obtain guns.

Tuma and Manriquez were both eventually taken into custody. They face federal charges of unlawfully manufacturing and dealing firearms. If convicted, they could spend up to five years in prison.

In 2020, the City of Sacramento’s homicide rate hit a six-year high, with guns being used in the majority of cases. Sacramento experienced 192 firearm-related assaults in the same window, a nearly 30% jump over the previous year.