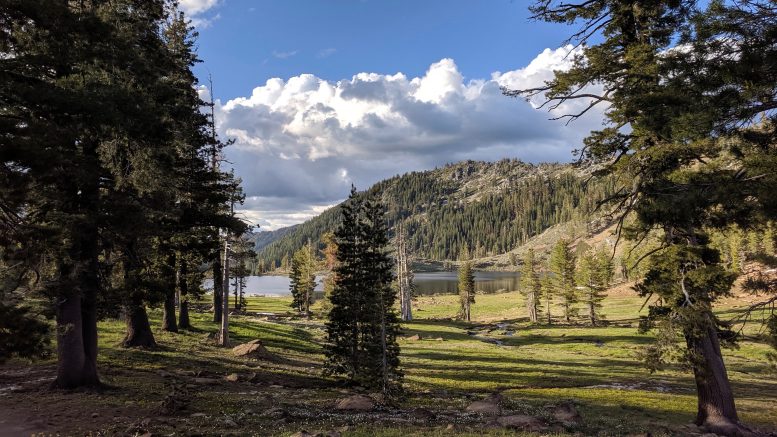 I was breathing hard and my right thigh began to ache. My wife Jan’s bad knee was really slowing her up. We were way off schedule, falling farther behind our target pace. Each step required more determination.

The tree shadows projected further down the meadow. The sun fell behind the snow-covered ridge line – the steady march of darkness had begun. We were losing the race to set up camp before it got dark. I thought about the new tent stuck inside my backpack. I had never broken it out for a trial before. We really are greenhorns, ignoring so many basic backpacking concepts.

We entered an area of the meadow that had green, waist-high, cabbage-like growth. A few streams meandered over the trail and were accentuated with long stalks of lavender and purple flowers. Anxiety and worry climbed into my backpack and started a troubling inner dialogue that was filled with negative thoughts – and the sour taste of pessimism. Why didn’t we start earlier?

I had been insistent that we take this southerly route. I would learn that our usual two-mile-an-hour pace did not account for the rugged, rocky landscape of Echo Summit, or frequent stops to gulp for air at 8,600 feet, or pulled muscles and nagging injuries. This is, after all, a hike on the Pacific Crest Trail, not a jaunt along the American River Parkway.

The Pacific Crest Trail is a spectacular wilderness hiking trail system that begins at the Mexico border and terminates in British Columbia at Manning Park. It traverses over 2,600 miles and passes through 25 national forests and seven national parks. The trail system took nearly 60 years for trail builders to carve a footpath across the Mojave Desert, around Mt. Whitney, through the John Muir Wilderness, into Yosemite, over the Desolation Wilderness, connecting to Mt. Lassen and Mt. Shasta, then to the rolling mountains of Oregon, and finally the Cascade Range through Washington and into Canada.

The trail has evolved into a holy grail for “through hikers,” the daring souls that walk the entire route in 4-6 months. The PCT, along with the Continental Divide Trail, and the Appalachian Trail, have become the “triple crown” of through hiking.

The backbone of the Pacific Crest Trail, and by far the most challenging segment, is the John Muir Trail. Muir is the holy prophet and preserver of the Sierra. He is the conservationist that kept loggers out of Yosemite and successfully advocated to make it a national park. The Carson Pass Section that my wife and I were seeking to complete is only an on-ramp to the John Muir Trail, yet it holds magic vistas of Lake Tahoe, bright blue high-country lakes and meadows exploding with the colors of mountain flowers. As John Muir said:

“All the world lies warm in one heart, yet the Sierra seems to get more light than other mountains. The weather is mostly sunshine embellished with magnificent storms, and everything shines from base to summit—the rocks, streams, lakes, glaciers, irised falls, and the forests of silver fir and silver pine.”

John Muir founded a religion based on tramping through the Sierras. In recent years, thousands of through hikers and section hikers, like my wife and I, have been drawn into the mountain passes to worship God and Nature.

As we continued to descend towards Showers Lake, we found ourselves immersed again in John Muir’s Sierra. Our love affair with the Sierra began many years ago, but reignited when my wife faced a horrendous battle with cancer. She bravely fought a dire prognosis, and after two years of surgeries and chemo, she beat the odds and survived. When facing cancer, it takes a long time to heal the body but much longer to heal the soul. For Jan, much of the healing occurs on these long day hikes; and now, as novice back packers, we seek to stay longer in the healing embrace of the high country.

Jan has found a solace in these trips. She longs to go deeper and stay longer. I have been pulled, sometimes reluctantly, into this adventure. I am not always as ready to trade creature comforts for inner peace. But she is – and she’ always renewed and restored by these trips. I call it the “PCT Effect,” meaning the Sierra’s ability to spiritually infuse our being, to bring life into sharp focus, and to provide a world perspective that infuses daily mundane actions. The PCT Effect can calm existential angst. It can restore your faith in humanity. It can wipe away deep and hidden injuries, physical and mental. As the backpackers are consumed with the basics of life—finding shelter, preparing simple meals, and drinking in a stunning visual display of God’s handiwork—the PCT Effect brings the alienated urbanite into a new understanding of her place in the universe.

After six hours of a somewhat torturous walk down the mountain to a plateau above Meiss Meadow, we arrived at Showers Lake. Despite my fear and dread of a night set up, we made camp before the sun finally set. We were still in what is called the “Alpine Glow.” In the summer, the Sierras shimmer in a golden glow in prolonged twilight. Working together, the tent went up easily. I went to filter water from the lake outlet, and Jan set up sleeping pads and bags.

We were exhausted but proud of ourselves. We looked at each other and high-fived.

“Wow, that was a tough climb, I had no idea,” I admitted.

“You remember that 60-something couple we met at the beginning of the hike?” Jan asked. “They were walking the entire 13 miles as a day hike, they said they chose the northerly route to avoid that cliff face.”

“They were inspiring” I acknowledged. “Wasn’t that amazing that they had just completed their last section to complete the entire PCT?”

A wonderful thing that happens on the PCT – part of the PCT Effect – is the rare, open interactions that happen with perfect strangers. The through hikers are very interesting to talk to, and my wife and I love to find out where they are from and when they hope to finish the trail. Somehow, a unique openness occurs that bridges age differences and even nationalities. The PCT draws a wide range of international adventurers. We love finding out where they are from and why they are taking on such a huge endeavor. As we settled into our sleeping bags and look out at the night through an open door, we talked about who we had met that day:

“What do you think about the young girl from San Diego?” I asked Jan

“Well, I am a little worried, she is southbound, like most of the through hikers today, she will have to get through the John Muir soon. The snow has been coming early.”

She added, “I guess we are both operating outside the norm of what is considered sensible.” Jan’s voice filled with concern. She got quiet and looked out at the full moon beaming down on us.

“There are risks,” I reasoned. “Some people get hurt, especially in this year’s heavy snow. You have to be careful, not push yourself too far.”

“Nothing risked, nothing gained,” my wife responded.

The PCT effect causes people to push outside of themselves, to risk injury and exhaustion, to feel the full experience. During the night – a night lit up by a spotlight of a moon – we heard a rising wind sweeping across the lake. Our tent fly snaps and the walls of our tent bend. We drift into sleep, almost too tired to let sleep overtake us. Later, I wake to a banshee howl of a wind. A Sierra storm is rising. It is a little scary but also awe-inspiring. At times the wind sounded like a freight train would roar over our bags and scoop up our tent. But it didn’t. I was fully awake, the wind pouring through the tent flaps and over me. I tingled with life. As difficult as this journey had been, we would do it again. We are fully affected by the PCT Effect. We will return for more.

3 Comments on "Essay: the PCT Effect, or healing and inspiration on the Sierra’s greatest trail"