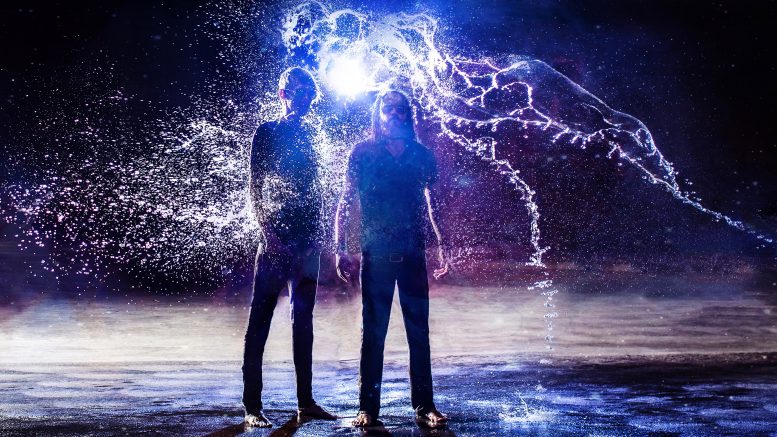 The photography of Elle Jaye has taken Sacramento's music scene by storm. Here, she snaps Color the Sound's Zack Kampf and Jesse Martinez.

Pink hair, lenses and hugs are part of a rare approach the city’s musicians can’t get enough of

It’s a beat frozen in time: Splinters and frays of fibrous hickory bursting from the center of 20 drumsticks gathered into a bundle, the action framed against a deep blue background. The image has life in it, dents and divots scattered over the surface of instruments displaying clear evidence of the use and abuse they’ve endured.

Sacramento photographer Elle Jaye spent the last 15 years traveling all over the state, the coast, the nation, and the world, capturing subtleties and vulnerabilities throughout the music industry and beyond. Her subjects are usually musicians — specifically drummers — though she also works with brands and does artist portraits. She playfully boasted that she shoots “all the things.”

And some of the most creative people want her to shoot them.

Jaye, who grew up in Citrus Heights, says her pursuit of photography is predicated on a foundation of dorkiness. She first experimented with taking pictures as Editor of her high school yearbook. Later, she was drawn to capture live performances from her favorite bands.

Jaye’s portfolio boasts of some heavy-hitting names in the music industry. Her lens has captured Questlove’s kindly smile, as well as current Toto percussionist Robert “Sput” Searight (who Jaye calls her fairy godfather in the music industry), she’s also rubbed elbows with many popular and talented Sacramento musicians.

“This is home,” Jaye noted. “People have made it feel very much like home. Sacramento’s music scene has been really supportive of me the last several years.”

If Jaye’s portfolio contained only Sacramento-area creatives, it would be the decade’s hall of fame for the city. Her instagram feed and website feature photos of blues siren Katie Knipp, rock songstress Larisa Bryski, and live shots of Dance Gavin Dance, among many others.

She calls Knipp “a hurricane in the best possible way.” The two worked together most recently over the summer to do a shoot at Knipp’s home.

“Elle Jaye is magic, and therefore she brings out the magic in the rest of us,” Knipp told SN&R. “She makes me feel so comfortable in front of the camera, not just because of who she is as a person, but the fact that she is a true artist in her craft.”

Sacramento guitarist Darius Upshaw first met Jaye when she was hired to shoot one of the bands he performs in, Gold Souls. She’s since snapped moments that include Gold Souls’ members chasing lead singer Juniper Waller as she sits cozily in a gold cadillac.

In contrast to such jovial images, Jaye’s portraits of Upshaw himself access a stark wisdom in the man’s face and being.

“If you’re a band in Northern California and you haven’t taken pictures with Elle Jaye, you don’t exist,” Upshaw said, praising the photographer’s ability to capture candid moments perfectly. “She’s a friend to musicians. Elle Jaye is the truth. We’ll just be standing around and she’ll say, ‘Alright, everybody look this way,’ and that ends up being the shot. She’s very good at guiding the energy and getting these poses that don’t look [rigid].”

Beyond the music world, Jaye selectively books personal sessions and works with the local food scene and the city’s comedians. That includes Sacramento podcaster Johnny Taylor, Jr., whom she says is a “rad dude” she often reaches out to when she’s in a bind.

“I’m like a ‘get over here and let me snuggle the fuck out of you’ kind of person,” Jaye laughed, remembering a shoot she did with Taylor over the summer. “I’m a beard fan, he’s a beardie boy … I have stupid ideas like, ‘How about you blow these bubbles because I brought some?’ There’s just something magical about a bearded man blowing bubbles.”

Hanna Jane Kile plays guitar and sings with the local groups Solabel and Dear Darlin. She’s also a solo artist. She first encountered Jaye when her husband, drummer Corey Strange, purchased a session with the photographer to pair with one of her solo efforts. The connection has continued: Kile recently had promotional shots done by Jaye for her upcoming album “Wither,” due out Dec. 21.

“She is like a punk fairy godmother – she brings light wherever she goes,” Kile said of Jaye. “At our first shoot, we both got teary eyed. I’ve never felt more comfortable in front of a camera than I did with her.”

At 22, Jaye got married and moved to Shingle Springs. She soon realized that the foothill music scene didn’t have nearly as much to offer a photographer as Sacramento’s dynamics. She found herself pivoting, pointing her camera elsewhere.

“I [switched] from music to doing portraits and weddings for about 10 years,” she recalled. “There’s just nothing up here. There’s one venue now that just opened a couple of months ago in Placerville, but other than that, there’s nothing.”

After separating from her husband, Jaye remained in Shingle Springs with her two sons (who are now 10 and 12). Fizzed out on romance, she could no longer find satisfaction in working with clients on what seemed to be the happiest day in their lives.

“When I got divorced, I mean, I was just bitter. I was like, ‘Fuck this. I cannot stand people who are in love.’ So I [went] back to music and head shots.”

Working out of a studio on Folsom’s Sutter Street, Jaye ran into a group of drumming students taking classes with drum instructor Mike Johnston. Jaye credits the intuition of that group of “nerdy 50-year-olds” with helping her build the network of clients and supporters that she now enjoys. As Jaye puts it, Johnston opened her eyes to the world of drummers and musicians.

“This dude is a huge deal in the drum world [and] has a huge online education platform,” she said of Johnston. “It kind of put me in a position to get behind the curtain and see some things that I never, ever, ever would have had an opportunity to be a part of. He was the catalyst; it just grew from there.”

Shooting drummers became one of Jaye’s signature accomplishments, though, when she was a teenager, her closest connection to drum kits was the annoyance she harbored for her younger brother’s practicing.

“My first love was music, but I never really watched [my brother] play,” Jaye remembered. “In fact, I was completely unaware of anything with the drum industry. I had no idea how intricate the drum world was, and how the instrument itself is so versatile. There are so many different moving parts to a drum set … it’s so pretty.”

When planning photo sessions, Jaye takes time to find out about her subjects’ moods and anxieties. She wants a personal connection with them. She hopes that connection and energy can highlight not only their vulnerabilities, but the nuances of the instruments that they’re playing. She thrills in experimenting with light and motion while shooting.

“When you add light [or] a kinetic material to it — like water spreading behind a kit — the lights behind catch the water and twinkle on the symbols,” she explained. “That’s more beautiful than jewelry to me.”

She added, “Somebody sat in a sweaty-ass workshop hammering this symbol out for however long it takes them; their hands are probably cracked and they are calloused. [Builders] take these pieces of wood — reclaimed bog oak wood pieces, or whatever — and they can see a finished product in the way something has grown.”

Fan of Jaye’s work can’t wait to see the ways her own art continues to grow, and continues to help Sacramento’s creative scene grow with it.

1 Comment on "The photo oracle: Sacramento’s Elle Jaye has an eye for capturing the music scene’s creative lightning"