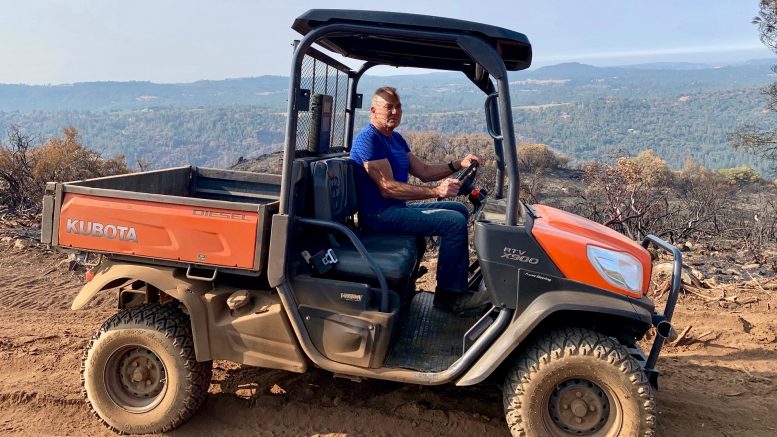 Randy Rossi, who fought to save his winery, Saluti Cellars, from the Caldor Fire surveys the blackened aftermath nearby. Photograph by Scott Thomas Anderson

Randy Rossi throws some muscle against the gear-shifter of his Kubota ATV as it plows through broken powder on a mountain top. The wheels continue to wrench through shifting dirt, and, as they do, they’re surrounded on all sides by charred, blackened hellscapes of complete destruction.

Just down the slope, beyond the lunar-like ebony views, are the vineyards, tasting room and pavilion of Saluti Cellars. Together they mark a business dream that Rossi and his wife Tina spent the last 20 years building up. The Caldor Fire came within a stone’s throw of reducing everything they’d worked for to ash.

“It was a long battle, because we were just surrounded 330-degrees by fire,” says Rossi, who’d planned for such a disaster – and who stayed to protect his winery.

“You can’t be overprepared” he adds, “because a catastrophic fire like this will keep coming back at you, day after day. Just a shift of the winds will make the difference between you being lucky, or very unlucky.”

In the Rossis’ case, they were lucky: Fire crews, with help from the owner, somehow managed to save Saluti Cellars. But the vintner isn’t overly celebratory as his ATV rocks through hillsides that looked like they were just drenched in napalm. That’s because, within an hour, Rossi will be handing out food, clothes and living supplies to the more than 500 families who lost their homes to Caldor’s fury.

“It took out all those homes in Grizzly Flats in one night,” Rossi mutters, shaking his head. “Then it was coming at us.”

State, federal and local firefighting crews managed to rescue five popular El Dorado wineries in the immediate path of destruction; and, while local viticulture workers and the greater community are mourning the wide-scale displacement Caldor brought, the fact that a vital piece of the county’s economy will continuing providing jobs and commerce is some relief.

At least, for now.

Saluti Cellars is positioned a little over two miles from Caldor Road. That’s where, on Aug. 14, a fire bearing that now-infamous name began to paralyze the psyche of California by threatening its best-loved campgrounds, historic ski resorts and then ultimately South Lake Tahoe itself. It all began with a quiet hint of smoke on a mountainside.

According to numerous residents of Grizzly Flats, the U.S. Forest Service – the agency with jurisdiction on Caldor Road – took something of a wait-and-see approach rather than aggressively trying to extinguish the threat in its early hours. While the agency has given ambiguous explanations to reporters about this accusation, many El Dorado County residents are livid that Caldor wasn’t quickly snuffed out when it was initially detected as only a few-acres-large brush fire.

“At first, it kind of smoldered and didn’t do much, but then around the third night, it took off toward Grizzly Flats,” Rossi recalls. “We were pretty concerned.”

Caldor morphed into a wildland inferno that raged into the nearest community, leaving hundreds of its houses looking like carpet bomb targets.

Rossi had always known something like this was a possibility. As he and his wife were converting Saluti’s 250 acres into a high-elevation vineyard and picturesque wedding venue, they took all the precautions they could against fire. The winery has a 5-acre pond, a large water tank, roof and yard sprinklers and two onsite hydrants with more than 16,000 gallons of water behind them. It also has several natural fire breaks and Corriente cattle roaming its hillsides to keep vegetation down. Saluti’s rustic hiking trails can double as fire-access paths.

Before long, Rossi saw the ridgetop immediately above his winery brightly immolated. He turned his sprinkler systems on, watching helicopters begin to scoop water from his pond to throw at the hottest flames. Rossi says that, at some points, the choppers were pulling water from the pond every four minutes. Air support eventually drew 3 million gallons of water off Rossi’s property as they fought to save it.

Perry Creek Winery, which is the maker of the regionally famous Perry Creek “Zin Man,” stood only a few ridges away and was also seriously threatened as Caldor pushed out of control.

For Rossi, the next part of the melee was stopping all the spot fires that the heat curtain left in its wake. A former San Jose police officer and federal investigator who’d worked counter-terrorism in Afghanistan, Rossi was more than comfortable letting firefighters use his winery as a staging outpost – and he was comfortable staying to jump directly into the struggle.

For more than a week, Rossi and a few helpers went directly at the flare-ups. They used a truck with a 250-gallon water tank on it, as well as the Kubota, which was fitted with its own 60-gallon tank.

“The spot fires kept hitting us from different angles,” Rossi explains. “We were just surrounded by fire, and the spot fires would come over from the main fire, depending on where it was. So, we had four of us that would go out and chase the spot fires as they developed.”

In the end, Rossi only lost two acres to the disaster. His current grape harvest, however, was entirely ruined by smoke taint.

A monster on the move

Jim Czachorowski had bought Sierra Vista just two years before. He took it over on the eve of California’s economy going haywire from the pandemic. That didn’t stop him from making a number of upgrades to the vineyard and the winery’s infrastructure. For him it was worth it, since Sierra Vista’s hillsides, which were first planted in 1974, boasts some of the oldest, non-graphed syrah vines in all of California.

Now, the Caldor Fire was sailing toward those deep, deep roots. Czachorowski also had to wonder whether, even if the blaze was halted, the season’s grapes would suffer the same fate as Rossi’s. He says a stroke of farming luck saved that from happening.

“We’d started to harvest before most of the smoke and fire came within our proximity,” he notes. “We were lucky that a lot of our stuff came in early. All of our whites, and some of our reds, had already been harvested … The most stressful thing was worrying if we were going to be able to finish.”

Once the immediate peril had passed, Czachorowski and his crew got permission to go back onto the property and finish picking the vines. Then a second stroke of luck happened, this one for all of the wineries around Pleasant Valley: A hard rain suddenly fell, washing the blankets of ash off the grapes.

Nearby, Miraflores’ team was also celebrating those pennies from Heaven. The Caldor Fire had actually breached Miraflores’ property, burning roughly 180 acres of its scenic forested slopes and wooded hillsides. The flames eventually reached the edge of its vineyards, charring several rows of zinfandel and syrah grapes – but firefighters stopped it there, saving most of the vines. Crews spent more than a day manning engines, bulldozers and water tenders to prepare for that standoff. In the end, all the work paid off. The accomplishment meant that Miraflores owner Victor Alvarez, and winemaker Marco Capelli, can continue operating one of the most environmentally sustainable and wildlife-friendly vineyards in California.

“Victor and the rest of us are so grateful for the firefighters, the dozer operators and the law enforcement that saved our winery and vineyards,” says Ashlee Cuneo, the manager and head sommelier at Miraflores.

She adds that it could turn out that the unexpected rains salvaged Miraflores’ harvest, too. The winery is going to attempt bottling the grapes, confident that Capelli can filter out any serious problems. Any remaining traces after that could just add a specific character.

“We’re actually kind of excited about this vintage, because it will be a really unique one,” Cuneo reflects. “There could be some real complexities in the flavor profile.”

Meanwhile, back at Saluti Cellars, Rossi hopes that more Californians will start asking questions about the role the U.S. Forestry Service’s decisions played in the wide-scale devastation.

“This let-it-burn policy that the Forest Service has embraced just does not work in the summer months anymore, and it’s a recipe for disaster,” he stresses. “You know, when you have over 500 homes that were just destroyed because of this fire – all those families that lost so much – that policy just needs to be completely abandoned.”

Be the first to comment on "The battle of wine and fire: Inside the struggle to save El Dorado County’s acclaimed vineyards from Caldor"