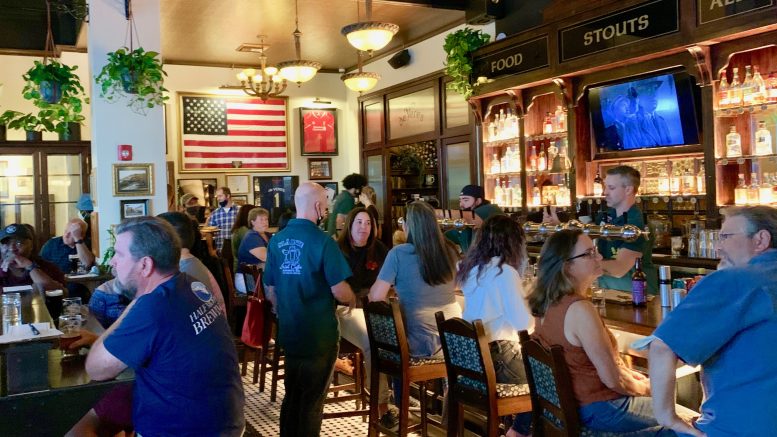 There was a line out the door Thursday evening as people waited to pay their final respects at something akin to an Irish wake. But instead of a corpse laid out on the table with pennies on its eyes and a shot of Jameson in its hand, in this case “the departed” was the transporting space itself, de Vere’s, probably the most beloved Irish pub to operate in Sacramento in a generation.

De Vere’s last Whiskey Wednesday had passed the night before, with owners Simon and Henry de Vere White urging patrons to drop by for half-off on any gold-filled bottle they were pouring. It was a gesture that probably would have been appreciated by their late grandfather, the Irish novelist Terence de Vere White, who for decades was known as Dublin’s true Renaissance Man. And here in Sacramento, the cultural critic’s grandsons had brought his reflective spirit — and inspiration from their broader family in the Celtic backcountry — straight to Downtown in the form of a pub that was lauded for its ultra-authentic style and feel.

But in the fallout from the pandemic, the adage that every Irish story is a sad story, and every Irish song is a sad song, seemed to be a premonition for de Vere’s, which ultimately could not recover from the state’s crippling lockdowns. That left the mourners crowding in on Thursday to lift their glasses with a nostalgic shrug of disbelief.

Simon and Henry first opened their doors in 2009. Their pub was instantly unique for Sacramento – spacious, impeccably clean and decorated with bar furnishings crafted near Dublin’s River Liffey. It was soon obvious deVere’s was the antithesis of the area’s knock-off, cookie-cutter pubs that tried to capitalize on Irish branding rather than genuine heritage. The brothers behind this new business had that heritage in spades – or clovers. The de Vere White half of their family immigrated to the U.S. from Dublin when Simon was a child. The O’Farrell side of their clan lived on Ireland’s wild west coast; so, when Henry was born in Boston, he landed in an Irish-influenced city the O’Farrells’ neighbors would have referred to as “the next parish over.”

Simon has said those roots are what ultimately gave him and his brother the confidence to swing for the fences in California’s capital city.

“We grew up with our parents’ memories of moving here from Ireland, and all of our cousins, aunts and uncles and grandparents lived in Dublin and County Kerry,” Simon once told me. “So, Henry and I eventually felt that, if any family could pull this off here, it was our family.”

They did more than pull it off: de Vere’s was a virtual doorway across the Atlantic, with its cloudy caramel walls blending seamlessly with chocolate and ebony oak panels shipped from Dublin. Customers sat in nooks and corners that were decked in memorabilia from the Irish Republic’s hard-fought legacies. And beyond its portraits of Padraig Pearse, Michael Collins and Brendan Behan – past the old oil paintings over timeworn book shelves – de Vere’s was filled with aged snapshots from Ireland’s streets and country sides. These were memories tied to the very soul of the pub, a collection of the O’Farrell and de Vere White family photographs.

Henry has acknowledged how often customers would tell him of their love for de Vere’s ambiance.

More than a few devotees of the pub also loved its soccer action, crowding into the back each season to watch Republic of Ireland’s players run hard at other countries as they tried to qualify for UEFA Euro competition. That, along with sometimes employing bartenders who were actually from Ireland, made the place a casual haunt for expats from the Emarald Isle. For years de Vere’s barman Darren Rothwell, from Killarney, Ireland, was a particular favorite with locals.

De Vere’s also carved its name into Sacramento’s culinary scene. Under the watchful eye of executive chef Wes Nilssen, de Vere’s followed the lead of Ireland’s top chefs in Dublin and Kinsale, using a pure farm-to-fork commitment for maximum effect on everything from traditional Gaelic staples to classic bar food.

Despite the legions of fans, de Vere’s was, according to Simon and Henry, irreparably wounded by the pandemic. On Sept. 27, the brothers announced on social media that they were closing.

“We remember the little window of possibility that opened when we received support through PPE and FEMA funding,” they wrote. “We were able to make lunches and dinner for the elderly and (Sacramento City Unified) school children who needed it in such a tough time.Then Snug Jr took form and brought a lot of joy to Sacramento through simple, yet well-made comfort food. We were blessed to keep our team employed. As we continued to hand out to-go bags full of happiness, we waited patiently to be able to reopen our namesake pub … While the last few months since opening have felt like a homecoming, we haven’t been able to dig ourselves out of the hole that the pandemic created. When looking ahead to the future, we may not ever get back to where we were pre-pandemic.”

One person shocked by the post was musician David Albertson, who’s group the Albertson Duo had just performed at de Vere’s. A highly regarded multi-instrumentalist, Albertson used the occasion to weave some traditional Celtic fiddle playing into his much wider repertoire. He liked sinking pints at de Vere’s and was hoping to continue playing there.

“It had all the things you’d want for a great place to hang out with friends, along with a lot of great whiskey,” Albertson noted. “There is just a sense of familiarity when you’re in there.”

Simon spent that last Thursday evening trying to embrace the familiarity as he shook hands with longtime patrons, warmly embraced friends and smiled while the drinks kept flowing. The Irish have a tradition at their wakes of stopping the clocks at the exact time of the departed’s passing; and as people kept hovering around Simon, it felt like they were stopping the metaphoric clock on the end of an era in local pub culture.

In the meantime, fans who weren’t there flooded de Vere’s social media with well-wishes and laments. Customers like Jamie Villa. “This is heartbreaking,” she wrote. “de Veres will always be an icon to this city.”

Scott Thomas Anderson is also the host of the ‘Drinkers with Writing Problems” podcast.