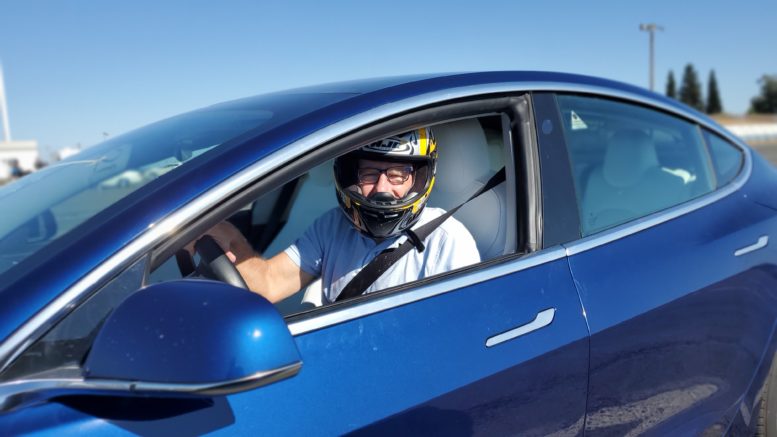 Jeff before the race. Photo courtesy of Guy Hall.

I won my first two drag car races at age 70.

While the Tesla engine was totally quiet, I cannot say the same for my stomach and heart when Sacramento Electric Car Association’s Guy Hall told me to “floor it” on my practice drive before the upcoming race.

I was driving Guy’s car. When I hit the accelerator, the car took off so fast that my heart started pounding out of my chest, and my stomach thought I had eaten butterflies for lunch.

It was a classic fight-or-flight stress response, except the flight was causing the response. After several more tries, I was ready for my first drag race at age 70.

When it comes to driving, I am not a young 70. I am an old 70. My blinker is in constant motion for no apparent reason. I am always at risk of being rear ended because I slow down at yellow lights. Driving at night is an adventure.

So you can imagine my surprise when I received an email out of the blue from Guy Hall.

He asked, “Can I get you behind the wheel at the Sacramento Raceway drag strip in a high performance electric car competing against a gas guzzler?  You are likely to win. Next Wednesday? All you have to do is keep it pointed straight ahead.”

I responded, saying, “I am certainly interested in getting behind the wheel but need some more information. Should my wife look into a life insurance policy?”

After a few more emails, I met Guy at the Raceway. I had never been to a drag race, or any kind of car race, for that matter. In high school, in the late 1960’s, many of my classmates had muscle cars. Their cars made excessive noise, went really fast and were constantly breaking down.

On the other hand, my friends had Volkswagen vans which went from 0 to 60 m.p.h. only on a steep downhill stretch. A speeding ticket on the freeway was highly unlikely. We were, however, regularly pulled over by the police, mainly because of an obscure motor vehicle code regulation regarding long hair on young males.

At the Sacramento Raceway, I paid my $15 entry fee and filled out some forms. And then I got in line to race. On this very hot Wednesday night there were about 60 gas guzzlers and about 20 electric cars.

Like most sporting events, particularly ones that take 12 seconds from start to finish, there was way more hanging around and chatting than actual activity time. The people at the Raceway love their cars.

Matthew Cotton, by day is a Realtor, was driving his sharp-looking Mustang GTO 2015. He told me that the heat would impact how fast the car would go. He explained how drivers often use ice to cool their cars.

Duane Thomas has been working at the Raceway for five years doing various jobs. He was in charge of the water box that the gas cars drove through to get their tires wet before the race. Electric cars were supposed to detour around the water box. Duane explained that this helped the cars get better traction.

While the electric cars did not seem to need as much TLC, the Tesla drivers, like Will and Jannette Phelps, loved their 2016 Model S and were both planning to take turns at the wheel. When I asked about their previous racing experience, Will volunteered that his wife once received a ticket for drag racing in high school.

Finally it was time for me to race. A gas car vs. Guy’s Tesla. After the very patient and kind Raceway employee helped me line up my car at the starting line, I waited for the light to turn green.

I thought I had gone fast. But I was a slowpoke compared to the Tesla Model S Plaid drivers who were clocked at 150 and 151 miles per hour. Sacramento State University Professor of Psychology, emeritus, George Parrott, who is even older than me, was disappointed when his Tesla Plaid only went 147.10 miles per hour. He fully expects to hit 153 miles per hour next time.

My heart started racing just thinking about that.

Next time you see me driving, you’ll know me by the 2010 Black Prius with the blinker light on.

1 Comment on "Greenlight: How I drove over 100 miles per hour without getting a speeding ticket"