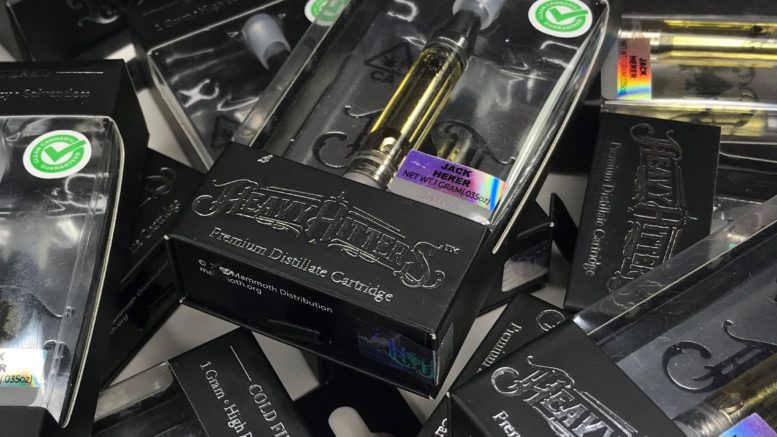 A law passed last December to curb online e-cigarette sales to minors may have an unintended impact on the legal market for cannabis vape products.

Called the “Preventing Online Sales of E-Cigarettes to Children Act,” the new law, which took effect on March 27, bans the United States Postal Service from shipping any products related to vaping, including cartridges, batteries and charging devices.

Instead, private transport companies will have to be used, assuming they meet the government’s new transport requirements before the 120-day grace period ends.

Beginning in July, any companies wanting to ship vape products will have to register with the U.S. Attorney General, implement a system that verifies a buyer’s age, and require a recipient’s signature upon delivery.

“Effective April 5, 2021, UPS will not transport vaping products to, from or within the United States,” spokesperson Matthew O’Connor said in a statement.

Online sales to teens have been a growing problem. In a 2021 study released by the University of North Carolina, 11 teenagers attempted to buy e-cigarettes from online vendors. Out of 98 online purchase attempts, “the overall success rate for youth purchases of e-cigarettes was 93.7%,” the researchers concluded.

“In 2019, vaping cannabis increased significantly among high school students,” said Christopher Garrett, Senior Media Adviser for the U.S. Dept. of Health and Human Services. “Available research suggests that youth who use tobacco products are more likely to engage in vaping THC, regardless of its legality in their state.”

While hemp and cannabis are not mentioned specifically, the law’s text nevertheless defines the banned products as “any electronic device that, through an aerosolized solution, delivers nicotine, flavor, or any other substance to the user inhaling from the device.”

“The core issue is that the definition of an ENDS (electronic nicotine delivery system) device is overly broad,” said Tiffany Devitt, Chief of Government and Consumer Affairs at Santa Rosa’s Canna-Craft, a multi-brand cannabis supplier. “As it’s currently written, this rule would encompass essential oils, CBD, and other non-nicotine products.”

“The Tobacco Control Act, which would allow for this ban, should only limit tobacco products,” said Arnaud Dumas de Rauly, CEO of the Blinc Group, a New York vape equipment manufacturer. “Those intended for use with cannabis, whether medical or recreational, should be exempt.”

Overall, it has been a bad couple of years for the vaping industry. It started with the curious vaping deaths that happened across the nation in 2019, mostly attributed to dangerous additives from unregulated manufacturers. At the same time, counterfeit THC vape cartridge brands on nationwide websites confused consumers about product integrity.

Meanwhile, environmentalists have been concerned about the toxic waste from used vape cartridges and batteries. The National Stewardship Action Council is lobbying for more “take-back” programs, mandating that retailers accept returns of empty cartridges they sell, in order to control the proliferation of dangerous vape waste.

Now, working in tandem with the new federal law, city governments are beginning to ban all non-traditional e-cigarette flavors because of their appeal to children.

At this point, local cannabis retailers don’t seem to be worried. Danny Kress, manager at Sacramento’s A Therapeutic Alternative dispensary feels that the problems will be minimal, “because the California cannabis industry [already] does not allow any shipping of cannabis products using outside delivery services,” he said.

But larger manufacturers are worried.

“On the THC side of our business, we will likely see freight costs go up as we’re forced to use more expensive private carriers to ship wholesale equipment,” said Canna-Craft’s Devitt.

Could the new law be a subtle attempt to address concerns about teens and THC? Dumas de Rauly said that the law was not aimed at cannabis, but “unfortunately, the cannabis industry can become a collateral victim of this war on teen vaping.”

He feels that cannabis businesses should review the law, “and take the time to lobby to protect their ability to ship products.”

1 Comment on "Is there a threat to the future of vaping?"