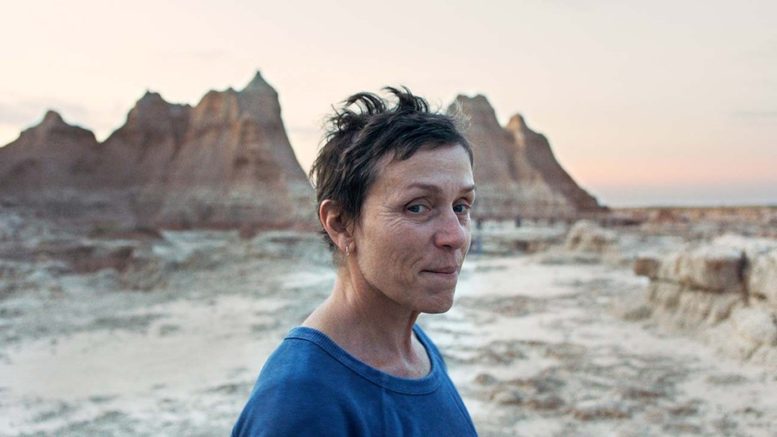 PHOTO/FOX SEARCHLIGHT PICTURES: Frances McDormand in "Nomadland," a film that begins and ends in Empire, Nevada. In this photo, her character, Fern, is in the Badlands of South Dakota.

Reporters witness events unfolding in snapshots of time, then they pass on those glimpses of people and places to audiences. The chroniclers, recording history in a hurry, rarely see what happens to the subjects of the stories in the months or years following a news event. Those peoples’ timelines — and tales – progress in private, off the media’s radar.

So it was in January 2011, when the company town of Empire, in the shadow of the Selenite Range about 100 miles north of Reno, closed down after 88 years. Empire’s demise put 90 people out of work and affected about 300 residents whose fortunes were tied to U.S. Gypsum, which owned Empire’s houses. The families scattered, the buildings were shuttered and the U.S. Postal Service discontinued the town’s Zipcode.

Alkali dust swept over the site. End of story.

Enter Jessica Bruder, a journalist, journalism professor and author of “Nomadland: Surviving America in the Twenty-first Century.” The book, published in 2017, is a non-fiction account of Americans who navigate our tightrope of an economy by staying in motion: traveling in vans and RVs from temporary job to temporary job. One of Bruder’s main subjects is a widow displaced by Empire’s demise. Her story is the focus of “Nomadland,” the film, now in theaters, including Reno’s El Rancho drive-in, and streaming on Hulu.

Living off the grid

Many of the wanderers of “Nomadland” live their lives on the road in response to the Great Recession that began in 2008. The economic debacle interwoven with the COVID-19 pandemic makes both the book and the movie even more topical and poignant.

The film, directed by Chloé Zhao, who also wrote the screenplay based on Bruder’s book, is a work of visual poetry that captures the injustices of the nation’s economy, and its effect on Americans, with empathy and honesty. It’s relevant, but never preachy; it’s a cascade of compelling stories.

There are no murders or fights. Nothing explodes. Superheroes save no one. It’s a slow-paced, yet engaging odyssey of a woman dealing with loss and grief who seeks (and sometimes finds) adventure, relevance and meaning in the tucked-away places beyond the highways’ horizons.

The story begins in Empire, where Fern (Frances McDormand), a widow in her 60s, has put most of her meager possessions in storage and sets off from the windswept playa of Northern Nevada in a van to seek out a living and a new way to live. She works at the Amazon warehouse in Fernley during the Christmas rush, and then heads for Arizona and another desert.

Fern meets and mingles with other rootless nomads, forging friendships and joining communities as temporary as her jobs, before setting off again on a ribbon of asphalt. Her trek takes her through Nevada, Arizona, California, South Dakota and Nebraska. Zhao’s photography captures the haunting loneliness and the vast beauty of the West, landscapes that echo Fern’s interior journey.

McDormand, who can communicate more emotion with a glance than many actors can accomplish with an extended soliloquy, is the solid core of the film. She and veteran actor David Strathairn, as Dave, a fellow vagabond who feels the tug of a more settled life, are the only two familiar faces in the flick. Most of the other cast members are not actors and some – who were among the subjects in Bruder’s book – tell their own stories within the context of the film.

“I was getting close to 62, and I went online to look at my Social Security benefit. It said $550. Fern, I had worked my whole life. I’d worked since I was 12 years old, raised two daughters. I couldn’t believe it.”

– Linda May, a modern “nomad,” playing herself in “Nomadland.”

Bruder, who was honored as the Laxalt Distinguished Writer at the University of Nevada, Reno in November 2019, told an interviewer at the UNR event that she centered on Linda May in her book, because “one of the coolest things about her, whenever you spend much time with somebody, you watch what they say to you and you watch what they say to other people and some people change, right? … Linda was just Linda. Linda was Linda with me. Linda was Linda with other people and Linda was pretty secure in who she was and where she’d been.”

That’s the sort of authenticity that shines from the screen in “Nomadland.” Fiction and non-fiction are intertwined, and the result rings true.

The Great Recession put many of the travelers on the road; the COVID-19 crisis, presumably, is adding to their numbers. The nomads are not down-and-outers; they are middle-class Americans who took to the highway because of economic reasons or to find a way of living that transcends a life of ordinary, unrelenting labor with little to look forward to in retirement.

“Nomadland” is sometimes gritty, yet consistently poetic and lovely. It has sad moments, but never tumbles into despair.

– Fern (Frances McDormand), in “Nomadland,” after being offered a place to stay for the night.

Like the saga of the fall of Empire, Nevada, the story does not end. The real-life Fern and many like her are still out there. They steer their rides into the next campground in search of seasonal jobs like packing boxes in Fernley or shoveling sugar beets during the harvest in the Nebraska Panhandle.

It’s a film that stays with you. And it shows us the grandeur of the West and the power of community that surrounds the wanderers, and all of us, as we continue our own journeys from one snapshot in time to the next.

Who let the books out?

Be the first to comment on "Nomadland: a road after Empire"