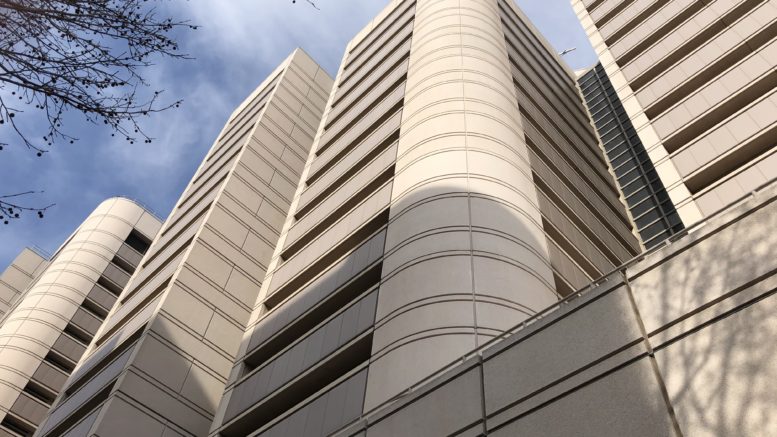 The Sacramento County Main Jail is the site of a COVID-19 outbreak. (Photo: Raheem Hosseini)

Inside the building, it smells like stale flesh. And when you open your mouth to speak, you can taste the building, too; it is sour, like something spoiled. The building also moves; you can feel the walls vibrate with the stress and trauma of tens of thousands of Sacramento residents who live there each year.

On Tuesday, the Sacramento County Board of Supervisors is to consider a $10 million construction contract to expand this building—the Main Jail—with a mental health facility.

For years, the county has stuffed this building beyond its capacity to house people who do not need to be there. The jail population peaked at 4,328 persons in 2015; while the population is currently about 3,200, the population remains negligently high, especially considering the current COVID-19 crisis.

Take John for example. When I met him, he had been in an out of the jail six times in a single year. He was homeless, used a wheelchair and had untreated mental health needs. When I spoke with him the last time, he was inside for violating his probation, again. His ankle monitor battery had died and, because he was unhoused, he had nowhere to charge it.

His mental health deteriorated significantly every time he entered the jail. The staff would strip him of his clothes, take away his wheelchair and place him in solitary confinement as a form of treatment—where the walls were covered in feces and blood of other people. In tears, he told me and others he wanted to get out of the cycle of incarceration: “I do not feel safe.”

At least ten people have died inside the jail in the last year. And the 23 suicide attempts last year was the most in more than a decade.

The county does not need more space for the thousands of people, like John, who are held in the jail as a result of their unmet needs in the community. Quite the opposite, the county should significantly, sustainably and urgently reduce the amount of people in the jail.

One in two persons coming into the jail have serious or unmet mental health needs; this number continues to grow even as the overall jail population decreases. Counties, like Sacramento, are taking people who do not have access to community-based services off the streets and putting them into human cages.

The Board of Supervisors should not worsen the situation by approving a construction plan without first releasing people. The money is set to come out of the county’s general fund, not the Sheriff’s Department budget. The plan will divert money away from already under-funded housing, health and human services, and during a deadlier-everyday pandemic no less.

Counties, like Sacramento, are taking people who do not have access to community-based services off the streets and putting them into human cages.

One solution is for supervisors to invest the $10 million instead in a 24/7, countywide alternative to 911 in which mental health providers and peers trained in deescalation respond to mental health crises, rather than law enforcement.

The board will have the opportunity to make this decision on Feb. 23. Next, the board can direct the Department of Health Services to apply for a state grant to expand community behavioral health treatment. Thankfully, the governor’s budget has allocated $750 million to fund the community-based mental health care that Sacramentans need and deserve.