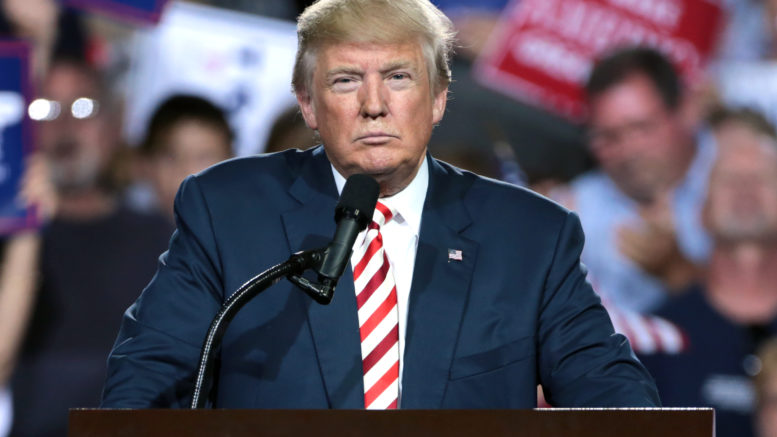 Donald Trump could become the first president to be impeached twice. (Photo from Wiki Commons)

Editor’s note: Republican leaders call for unity and healing after the insurrection they helped encourage

There’s lots of talk and commentary about what should happen to President Trump after the armed insurrection at the U.S. Capitol on Jan. 6. It’s way beyond politics: There need to be the most serious consequences for all involved—from individual rioters all the way to the president himself.

Now, it’s about history—making Trump the only president to be impeached twice and recording for posterity which side every member of Congress is on.

On a party-line 223-205 vote Tuesday night, the House approved a resolution calling on Vice President Mike Pence to invoke the 25th Amendment to remove Trump before Joe Biden is inaugurated on Jan. 20. But even before the vote, Pence declared he would not do so.

So Wednesday, House Democrats led by Speaker Nancy Pelosi of San Francisco pushed through an article of impeachment accusing Trump of incitement of insurrection. The mostly party-line vote was 232-197.

“He must go. He is a clear and present danger to the country we all love,” Pelosi told the House on Wednesday. She said the rioters were not patriots, but “domestic terrorists” sent by the president.

Only 10 Republicans voted to impeach, but that’s 10 more than voted to impeach Trump in December 2019 after the investigation into Russian interference in the 2016 election.

They included Rep. Liz Cheney, the No. 3 House Republicans. “The President of the United States summoned this mob, assembled the mob, and lit the flame of this attack,” she said in a statement quoted several times by Democrats. “The President could have immediately and forcefully intervened to stop the violence. He did not. There has never been a greater betrayal by a President of the United States of his office and his oath to the Constitution.”

Only one of California’s 11 Republican House members, Rep. David Valadao of Hanford, voted for impeachment. “Based on the facts before me, I have to go with my gut and vote my conscience,” he said in a statement. “His inciting rhetoric was un-American, abhorrent, and absolutely an impeachable offense. It’s time to put country over politics.”

He said most in the crowd were peaceful, and only a few in the “lunatic fringe” rioted. And he said it’s “gratuitous” to impeach Trump in the last week of his presidency.

Senate Republican leader Mitch McConnell is reportedly telling associates that he believes Trump committed impeachable offenses, opening the possibility he might convict Trump. But McConnell said an impeachment trial is not going to start until after the inauguration.

At least one Democratic leader had suggested the House might not send the article of impeachment to the Senate until after Biden’s first 100 days in office, to give him time to launch his agenda on COVID-19 and the economic crisis and also get his Cabinet nominees confirmed.

But there is pressure to act sooner.

“I hope that the Senate leadership will find a way to deal with their Constitutional responsibilities on impeachment while also working on the other urgent business of this nation,” Biden said in a statement.

Either way is fine with me. The important thing is for Congress to ban Trump from ever running for president again, especially since some Republican leaders are now trying to rewrite history.

House GOP Leader Kevin McCarthy of Bakersfield—who repeatedly echoed Trump’s lies about the election that fueled the mob—wants to say impeachment would further divide the country. What chutzpah and hypocrisy.

“A vote to impeach would further divide this nation,” McCarthy told the House on Wednesday.

Instead, he suggested a censure of Trump and a fact-finding commission.

But McCarthy is trying to have it both ways. He also said that Trump bears responsibility for the “undemocratic” riot and said that there is no evidence for claims that antifa activists are to blame. And he declared that Biden is the duly elected president and pledged to work with him.

But on Jan. 6, McCarthy and six other California Republicans joined a majority of House Republicans who voted to object to the election results in Arizona and Pennsylvania even after the bloody uprising.

And now Democrats are demanding an investigation into whether some Republicans might have colluded with the insurrectionists in planning the riots.

While the focus has been on the 25th Amendment, there should also be attention on the 14th Amendment, which allows Congress to expel lawmakers for sedition.

These Republicans want us to forget the recent history that they coddled and boosted Trump for four years.

But others remind us of an older, more disturbing history.

Former California Gov. Arnold Schwarzenegger posted a seven-minute video on Sunday that compared the insurrection to Kristallnacht—the Night of Broken Glass in 1938, when Nazi groups in Germany attacked synagogues, businesses and Jews in the streets.

Indeed, as more details and videos emerge of what happened inside the Capitol, it’s becoming clear that the attempted coup could have been more violent and bloody, that some of the rioters were targeting Pelosi, Pence and other lawmakers, possibly to take them hostage, or even to kill them.

Schwarzenegger says American democracy can be strengthened by this trial by fire.

But not if Trump continues to hold political power.

He posted a video Jan. 7 that was the closest thing to a concession that we’re going to get, pledging an orderly transition of power. But then he contradicted that message with another call to arms: “The 75,000,000 great American Patriots who voted for me, AMERICA FIRST, and MAKE AMERICA GREAT AGAIN, will have a GIANT VOICE long into the future. They will not be disrespected or treated unfairly in any way, shape or form!!!” he said in one of his final tweets before he was permanently banned from Twitter because of the potential he could incite more violence.

The FBI is warning of more armed protests at the U.S. Capitol and state capitols around the country leading up to the Jan. 20 inauguration. Trump hasn’t done nearly enough to condemn the insurrection, or to urge his supporters to stand down, though at this point, it may be too late.

Tuesday, he issued only half-hearted calls for calm. Instead, he claimed, incredibly, that his speech to the MAGA crowd Jan. 6 that incited the insurrection was “totally appropriate.” He also told reporters at the White House that the move toward impeachment is a “witch hunt” that is creating “tremendous anger” and “causing tremendous danger,” but said he wants “no violence.”

On Wednesday, during the impeachment debate, the White House issued a statement in Trump’s name that said: “In light of reports of more demonstrations, I urge that there must be NO violence, NO lawbreaking and NO vandalism of any kind.”

And after he was impeached, the White House put out a video in which Trump finally told his supporters to stand down and stop any violence. He didn’t, however, apologize for his role in the insurrection or say the election was fair and free.

Too many Republican leaders have yet to apologize for their appeasement of Trump or to call unequivocally for the MAGA crowd to stand down.

Their constituents should judge them harshly. History certainly will.