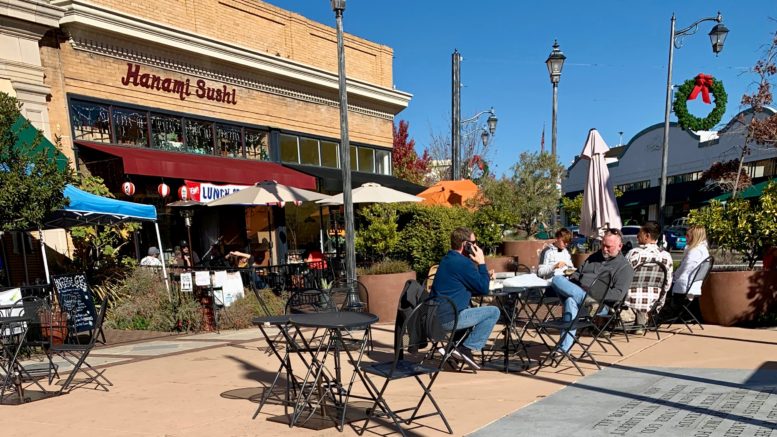 Small businesses across the state are facing the most severe lockdown since the early spring as COVID-19 spreads at record levels in California.

Thursday, Gov. Gavin Newsom announced that a new stay-at-home order is likely going into effect for the Sacramento region and most of the state within days, when ICU capacity falls below 15%. Bars, wineries and hair salons will be completely closed for at least three weeks, while retailers can only operate at 20% of indoor capacity and restaurants can only offer takeout and delivery orders.

On Monday, Newsom warned of “drastic” mitigation measures on the horizon but also announced new state assistance to hard-hit business owners and their employees.

“One thing we need to talk more about in terms of preparedness is preparing our small businesses,” Newsom said. “If we’re going to be talking about more modifications, and more restrictions… we have to be more mindful than ever of the economic impact and consequences of those further restrictions.”

Businesses that owe sales taxes will get a three-month extension on paying them, for as much as $1 million, give them more flexibility to deal with immediate financial losses and bills.

“In essence, it’s a float,” the governor said. “That sales tax is collected by the business member, it is in a bank account, where it’s supposed to be sent to the state, counties and cities for distribution. You can hold that money, you can use that money to float any obligations you have.”

Newsom also unveiled a new emergency relief package, designed with cooperation from the state legislature, to provide as much as $500 million, mainly by issuing $25,000 in cash grants to small businesses, nonprofit groups and cultural institutions.

“This is money we’re getting out the door,” Newsom said, adding that the funds will draw on state reserves. “This program will be a bridge just over the next number of weeks to what we will work on with the legislature in the next legislative session.”

The governor ended his virtual press conference Monday by describing the Main Street Hiring Tax Credit program, which went into effect Dec. 1. The $100 million fund gives business owners a $1,000 tax credit for each qualified employee they hire, to a maximum of $100,000 per business. Owners interested in utilizing any of the state’s new programs can find more information at covid19.ca.gov.

While Newsom’s additional relief efforts may be welcomed by desperate companies, the tightening of restrictions on businesses could further escalate tension between the state and local governments.

Though Sacramento health officials are enforcing California’s purple tier restrictions, supervisors in Placer, Kings and Fresno counties have all openly refused to do so, allowing their businesses to continue operating under the less strict “orange tier,” which allows for limited indoor dining. Officials in those counties have said that the cost to peoples’ livelihoods and economic futures is too high.

Restaurants with liquor licenses in those counties still have to worry about fines from the state Department of Alcoholic Beverage Control. That’s a lesson recently discovered by Matthew Oliver, owner of popular Roseville wine bar House of Oliver. He announced on social media that he would “fight back” against some Newsom’s restrictions, prompting a visit to his bar from ABC agents and a warning, according to multiple media sources.

SN&R has also received reports that several other counties in the region are quietly not enforcing the purple tier restrictions, though not making official announcements about it.

The state-local conflicts haven’t ended there. When Newsom announced on Nov. 18 that California would enact a 10 p.m. to 5 a.m. curfew in “purple tier” counties in response to worsening infection rates, the elected sheriffs of Sacramento, El Dorado, Tulare and Orange counties all declared they would not enforce it. Sacramento County Sheriff Scott Jones tested positive for the virus this week and is in quarantine.

“We’re seeing overwhelming support for enforcement,” Newsom said in the Thursday press conference. “There have been are a few exceptions … We have pandemic relief dollars, CARES Act dollars, and if you’re unwilling to enforce the rules we’re happy to redirect those dollars to other counties.”

County officials and some Republican lawmakers critical of Newsom’s broad approach to the pandemic were bolstered in mid-November by a legal ruling against the governor.

Sutter County Superior Court Judge Sarah Heckman found that Newsom’s executive order to send mail-in ballots to every California voter for the Nov. 3 election was unconstitutional because the governor changed state law without legislative approval. By this rationale, according to Newsom’s critics, most of his COVID-19 executive orders are unconstitutional. In September, a federal judge handed a similar ruling to Pennsylvania Gov. Tom Wolf for overreaching on COVID-19 health restrictions; the Michigan Supreme Court has ruled that numerous orders by Gov. Gretchen Whitmer were unconstitutional.

Pushback against Newsom’s approach hasn’t just come from court actions. It’s also been fueled by a series of perceived scandals, beginning with the infamous birthday party he attended at the swanky Napa County restaurant French Laundry. Photos circulated of Newsom and a sizable group of people—including members California Medical Association—partying together without masks or social distancing. The dinner was held just days before Newsom announced the curfew.

Then it was revealed that San Francisco Mayor London Breed, who’d steadfastly refused to allow most forms of indoor dining in her city even when its COVID-19 numbers put it in the least restrictive tier, had also attended a birthday bash inside French Laundry. According to the San Francisco Chamber of Commerce, 54% of that city’s storefronts have closed for good due to its lockdown measures.

Putting a cherry on the cake of public resentment was the revelation that a number of state lawmakers flew to Maui last week for a conference with lobbyists at the same time the Newsom administration was imploring Californians not to travel or have large family gatherings for Thanksgiving.

While the narrative of hypocritical California leaders issuing painful COVID-19 guidelines and restrictions, but not following those measures has undercut Newsom’s efforts, the overall competency of state government is also being questioned due to a scandal at the Employment Development Department.

At the same time that Californians hurled into joblessness by the lockdowns have been waiting months for their unemployment checks, thousands of prison inmates, including serial killers and death row inmates, were allegedly paid benefits, potentially totaling $1 billion. Local and federal prosecutors have called it the largest incident of public fraud in California history.

Newsom’s image and credibility problems were on full display Nov. 28 when he sent out a tweet encouraging Californians to support the annual Small Business Saturday. It was met with a long string of irate responses, many mentioning the number of small businesses that have gone under in 2020 and blaming his policies for it.

But at Newsom’s press conference Thursday, he tried to emphasize that he is aware of what small businesses are going through. “I’m not naive about what this means to your dreams, especially business owners,” he said.