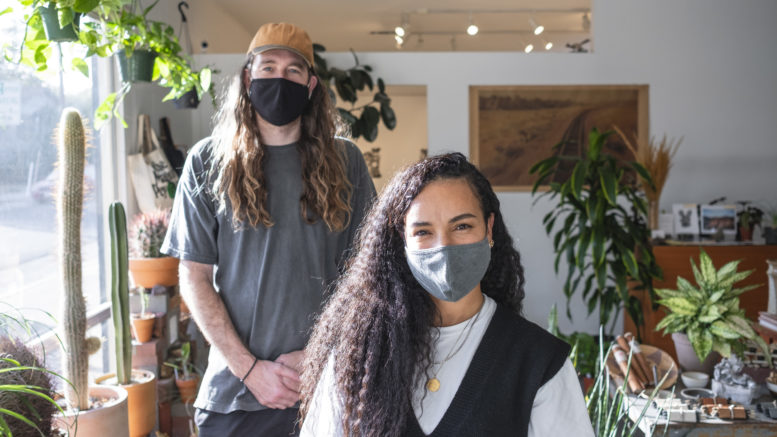 We stood in the back room of Public Land store holding a Calathea roseopicta. “That one likes mist,” said store co-owner Austin McManus pointing to the squat purple leaves.

The plant is one of hundreds in the cozy rustic boutique on 21st Street in Curtis Park. Wide windows let in copious golden light, raw wooden shelves hold bottlecap sculptures and artisan hand soaps and beyond the unassuming doorway at the back of the store hangs an exhibition by Oakland artist Grady Gordon.

Along with Mel Eligon, McManus opened Public Land in 2018 to sell a wide range of unique plants and handmade products that come from the earth, filling a need they saw in Sacramento for high quality, not “future trash.”

The pair opened the boutique after long careers in the art world. McManus spent seven years as the photography director at Juxtapoz Magazine. Eligon used her experience as a set designer in the fashion industry to design Public Lands’ storefront.

“In terms of like the way our store looks, I think that is informed by my past,” Eligon said.

But the pair always knew that the succulents, cacti and handmade soaps wouldn’t be there without the gallery space in the back.

“We wouldn’t be doing this without a gallery,” McManus said. “The gallery is super-important to us. I worked in art so long that it is like the fuel for everything.”

“We wanted to show art that was inspired by, informed by, using media from, the natural world to kind of perpetuate its existence.”

Until Dec. 27, the gallery is home to more than 20 black-and-white Monotype ink prints made by Gordon. His process is to apply ink to a glass surface, remove ink from the glass to “draw” the image and then finally transfer the image onto paper, resulting in one-of-a-kind prints.

Titled Don’t Walk Around Here Barefoot, the exhibition of frameless ink drawings chronicles the artist’s own experiences growing up in New Mexico. Familiar desert imagery like that of the Joshua Tree and the Gila monster appear, but Gordon also employs the quietly disruptive quality of the surreal.

One of Gordon’s most successful works in the exhibit depicts a New Mexico landscape, bisected twice by bands of inkless paper. A cracked bowl, two stack of rocks and a solitary section of fence sit in the middle of a brutally rocky desert terrain and a thick unnatural half circle of black ink that seems to disappear behind the distant mountains.

Some of the work is not as subtly hallucinogenic. One wall holds several images depicting Peyote and San Pedro cacti, which could prompt the viewer to think about the psychedelic and surreal. These drawings are more decorative than the landscape work, more closely resembling studies of plant life.

“The environment and art for us kind of go in hand,” Eligon said. “We wanted to show art that was inspired by, informed by, using media from, the natural world to kind of perpetuate its existence.”

While some exhibitions won’t address the environment as directly as Gordon’s work, Eligon and McManus say that  conservation is a primary consideration for their gallery.

“We didn’t want it to just be pretty picture of cactus and flora and fauna,” McManus said.

“We just want to get people inspired by it. We’re not claiming we’re like some big massive conservationists or anything,” McManus finished.

McManus and Eligon had to cancel three of their shows due to the COVID-19 shutdown, but the pair are hopeful that their authenticity will be enough to get them through.

“We believe in the environmental future and we believe in the future of art,” Eligon said. “Especially amongst all of what’s happening right now in our social and political climate— it’s now super-imperative that people continue to talk and make it a regular part of their everyday conversations.”