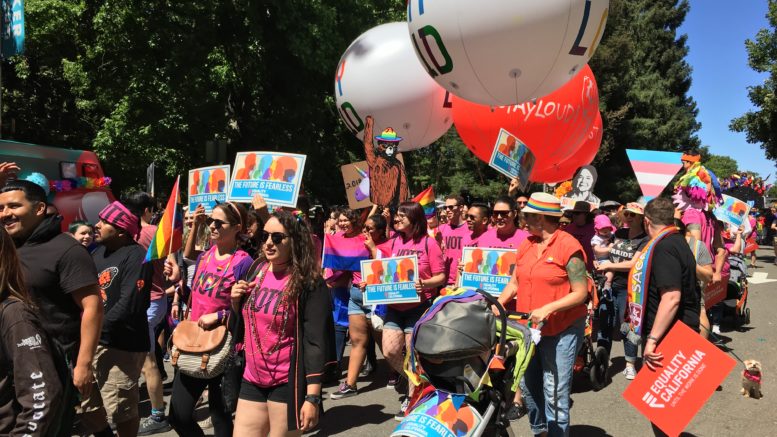 On May 31, the Sacramento LGBT Community Center took a small, yet courageous step towards justice. Given police violence towards marginalized populations—people of color, immigrants, workers, women, gays and lesbians, disabled people, etc.—the center decided off-duty police officers would not be allowed to participate in 2019 LGBT Pride March and Festival in their uniforms. No uniformed police in the march and no police table at the festival. Off-duty police officers and their families would still be welcome to participate in plain clothes, just like me and you.

On June 6, the LGBT Center board, led by Carlos Marquez, reversed the decision, cowardly picking a profession and its monied interests over the safety and identities of black Sacramentans and other people of color.

Marquez, a gay Latino man, had the audacity to tell the press that this new decision would provide people of color with the “access” to teach the police how to not harm and kill us, as if that is our responsibility rather than law enforcement leaders and the elected and appointed officials who oversee them.

As a black queer woman, this decision hurt me to the core. While the LGBT Center is no stranger to perpetuating white supremacy, its recent efforts to hire and engage more queer and trans people of color created a glimmer of hope that it actually would begin to stand in visible solidarity with us on issues including police violence.

Instead, center leaders spat in our faces. Unfortunately, it’s not unprecedented.

It has been 50 years since the pivotal Stonewall Rebellion of 1969, when queer and trans people, overwhelmingly people of color, decided to fight back against police and state-sanctioned violence and reclaim their humanity. It was not the first LGBTQ revolt, but it definitely set the stage for the modern LGBTQ movement that we now honor every summer with Pride events. Back then, Pride was known as “Liberation Day” and wasn’t about hobnobbing with political and corporate elites or vying for their sponsorships. It was about challenging systemic oppression and solidarity.

Yet, only a few years after “Liberation Day,” white gay men and lesbians began to divorce themselves from the original intent of the movement, leaving behind everyone else. In 1973, Sylvia Rivera, an iconic Latina gay liberation activist, forced her way on stage during a Liberation Day rally in New York City to chastise white and white-passing gays for forgetting the origins of the movement as people of color were still getting beaten by police and thrown in jail, or dying from police violence and abject poverty. The crowd booed her.

Fast forward 50 years, and not much has changed, even as many police departments across the country have diversified and been pink-washed. At the 2018 Pride festival, black and brown activists such as Ayotunde Ikuku had to remind the local LGBTQ community that Pride was a radical act against the police due to longstanding mistreatment of queer and trans people of color.

On June 1, while accepting a 2019 Pride Award on my behalf during the LGBT Center’s annual gala, themed the “Summer of Color: An Evening of Sacramento’s Champions for Equality and Justice, my friend and colleague Flojaune Cofer had to reclaim her time to ask the largely white and male attendees to check their privilege as they honored a group of white gay, lesbian and bisexual police officers and auctioned off a helicopter ride with the police. She urged them to do right by the most marginalized in our local LGBTQ community. Yet again, the center and the broader white LGBTQ community failed us miserably.

For that reason, I will be returning my Pride Award because I cannot in good conscience align with a center that so clearly has the lowest regard for people who look like me. Police have never been on the right side of any freedom fighting efforts in this country, and therefore have no place in Pride. I will not be attending the Pride march or festival this weekend, and I encourage others to join me in protest. And, finally, I stand in solidarity with the LGBT Center staff calling for an overhaul of the center’s board, starting with the resignation of Marquez.

Be the first to comment on "Essay: Police have no place in gay liberation"