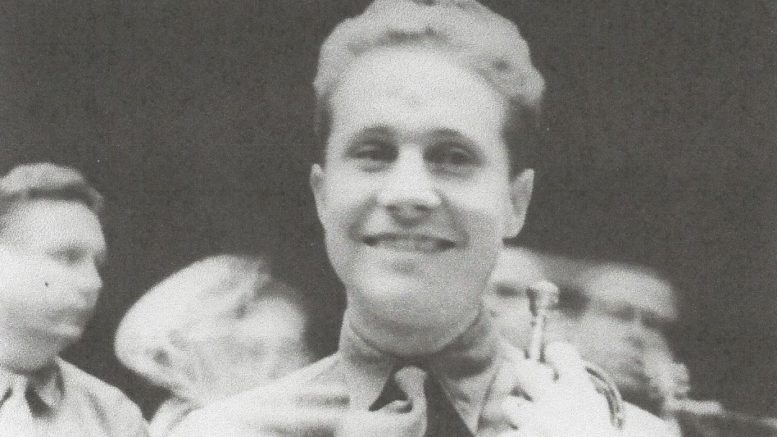 Private Richard Burt with his band mates in the Philippines during World War II. (Photo courtesy of Jason Burt)

First, you hear the sound of a needle roughly dragging against vinyl. Then, a voice cuts through the grainy noise: “Let’s begin, with these special recordings, on wire, that were done on the Philippine islands in 1946.”

The late trumpeter Richard Burt then introduces the first track of the album, “Moonlight in Vermont.”

Although his cover of the 1944 Margaret Whiting jazz standard is heavily obscured by scratches on the record, Richard Burt pierces through with his trumpet, playing a game of call and response with his big band.

“He loved playing with his band,” said Jason Burt, a Sacramento history teacher and grandson of Richard Burt, a longtime resident of West Sacramento.

Jason Burt released Sentimental Journey on Wednesday, Nov. 11 to coincide with Veterans Day and the 75th anniversary of the end of World War II. He has lofty goals for the album: To get his grandfather a platinum record.

He also believes that the record will be important for the jazz community, as it could be one of the only recordings of an amateur front-line band ever made during the war.

“Based on my research and what others have told me, nothing like this exists,” Burt said. “Jazz lovers will love it, too, because no one appreciates the history of their music more than people in the jazz genre.”

When WWII broke out, Burt’s then 19-year-old grandfather enlisted in the 746th Far East Air Force Band and was stationed in the Philippines, where he and his bandmates recorded the 10 tracks on Sentimental Journey, during a live performance for civilians and GIs on the front lines.

“You wouldn’t think of a band being right up on the front line, but in the Pacific, the front line was just about everywhere,” he said. “They’re hanging spotlights on blown-out palm trees and things like that, and they start the show with this USO group and on the other side of this ravine, just behind them, there’s action going on.”

Those guys would do their job and be in the middle of a war zone, with their weapon being a musical instrument.

After the band recorded the performance, Richard Burt was given permission to bring the records home. He then spent the next decades at Julliard, Drake University and with several bands including The Des Moines Symphony in Iowa and taught music in West Sacramento.

He kept the records safe for 75 years and recorded narration of his personal history— 28 minutes of which are included on the album. But in the 1980s, the records were lost, and Burt never saw the project through to completion before he died in 2016.

Jason Burt rediscovered the records in the attic after his grandmother passed. “It was October of 2019 and we were going through the house,” Burt said. “We knew about them, but we hadn’t seen the actual records in a long time.”

Burt made it his mission to remaster and digitize the recordings, finally cementing his grandfather’s musical legacy. But a project like this was way out of Burt’s usual wheelhouse, so he sought help from four-time Grammy award-winning sound engineer Gavin Lurssen of Burbank.

Burt hopes the album will bring deserved attention to musicians on the front lines of WWII and says he plans to donate a portion of the proceeds from the album to the World War II Foundation and USO.

“It’s just amazing to think about, that those guys would do their job and be in the middle of a war zone, with their weapon being a musical instrument,” he said.

However, the strongest motivation for Burt was sentimental: To pay tribute to his grandfather and share his long-lost record.

“Their goal was to play music and help those guys feel a little closer to home,” Burt said. “There’s fewer and fewer of them that are going to be around, so to have this thing right now—while they’re still around— is really important to me.”