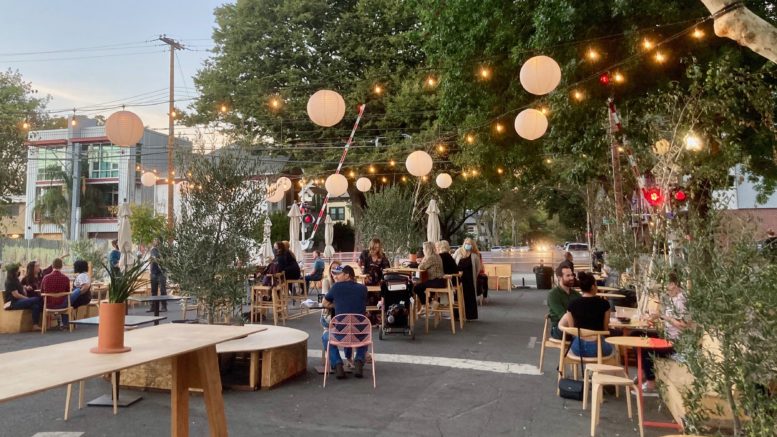 Restaurants on R Street have been taking advantage of the city’s Farm to Fork Al Fresco program, though that will become challenging in the winter months. (Photo by Kami Hoverson)

City Hall’s decision to close off part of the lively Midtown avenue to vehicles allowed dining hubs the space they needed to keep customers safer from coronavirus in the fresh, open air. Numerous restaurants all over Sacramento are coming up with similar makeshift parklets as part of the city’s Farm to Fork Al Fresco program, which has awarded grants to about 300. And scenes like this may help bring a sense of normalcy back to Sacramento, but they are also the lifeline that’s keeping many dining houses clinging to hope that they’ll survive the pandemic.

Yet there is an inescapable reality setting in for local restaurateurs, as well as the diners who want to support them—the unusually warm fall is sure to end before a coronavirus vaccine is widely available.

While there is a possibility that Sacramento County will hit the state’s public health metrics that allow for more indoor dining by early November, there’s also a chance that a virus surge could keep the county’s restaurants at 25% indoor capacity or stop dine-in service again entirely, depending on the severity of the spike.

Additionally, many patrons simply don’t feel safe eating indoors. That means a lot of small business owners are scrambling to find ways to keep their outdoor patios going once the winter chill and rain arrive.

But it’s not as simple as just moving heating devices near tents and canopies: The last thing owners or city officials want is sudden fire.

So City Hall is currently working with restaurateurs to devise new guidelines to safely bring heat outdoors. For some owners, the plans could make the difference of whether their restaurant will stay open.

How many restaurants will survive?

In late July, Yelp released a report using data and announcements from its massive review site to document the lockdown’s impacts on various cities. That report found that within the Sacramento-Roseville-Arden Arcade metro area, at least 131 restaurants had closed for good between March 1 and July 10. More concrete numbers for the city of Sacramento have been hard to come by; City Hall won’t begin to have a clear picture of the toll until it knows how many restaurants did not renew their annual business operating tax certificate. That process could go well into 2021.

Officials with the Sacramento Downtown Partnership, which represents businesses in a 66-block radius from the Old Sacramento waterfront to 16th Street, have been regularly surveying members, venturing out on inspection walks and constantly scanning social media sties to try to get a handle on the long-term damage. The partnership’s best estimate is that roughly three-quarters of the businesses within its restaurant-heavy district are still open in some capacity, including take-out and curbside pickup and those using the Al Fresco program.

“It’s difficult in downtown because the customer-base has really been driven by the office market, and a significant number of offices continue to work from home,” said Emilie Cameron, public affairs and communications director for the partnership.

“Many of the businesses we’ve talked to are seeing revenues of 10%, or at best, 25%, of what they were doing at this time last year. There are some exceptions—a business that’s doing really well, or a business where it’s costing money keep the doors open—but overall, there’s no denying that in the last six months the impacts have been significant.”

The city announced its Farm to Fork Al Fresco program in late May, allowing many restaurants to expand outdoor dining into sidewalks, on-street parking spaces, parts of streets and nearby parking lots. As part of the program, the city gave grants of as much as $3,000 to restaurants to help pay for barricades, lighting and furnishings. Even with the help, the cost to set up outdoor dining is high, depending on what kind of barriers they need to rent. Restaurants along busier streets require crash cushion barriers, which run several thousand dollars to rent for a couple of months.

Now the restaurants are having to factor in the overhead of outdoor heaters. More importantly, they’re having to plan for safety.

“Propane heaters and liquid petroleum gas heaters are not meant for being used indoors, inside tents,” said Jason Lee, the Sacramento Fire Department’s fire marshal. “We’d want those types heaters located more on the periphery of the tents rather than actually in them.”

Lee added that the fire department has a team that includes the city’s building and code enforcement departments actively working with the restaurants on guidelines to keep the Al Fresco program going through November, December and January.

“A lot of what we’re looking at is the tents and canopies and making sure they’re flame-treated per state requirements,” Lee said. “We also need to make sure firefighters have the ability to access those dining areas, and that there’s access to fire hydrants near them.”