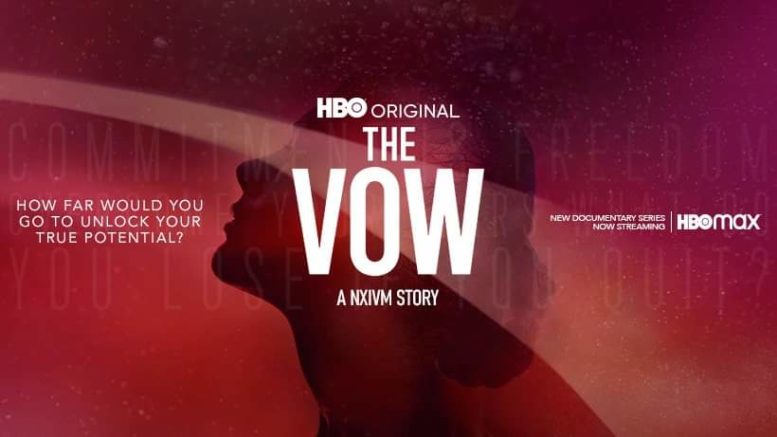 The Vow: Inside an Alleged Sex Cult, HBO’s nine-part series chronicling a group calling itself NXIVM, and its charismatic leader Keith Raniere, ended Oct. 18, just ten days before Raniere is to be sentenced for a number of federal crimes.

Raniere, known as Vanguard by his followers, ran a multi-level marketing, self-actualization program called the Executive Success program, or ESP. The program enchanted up-and-coming actors, filmmakers and the children of international royalty, politicians and business leaders.

Many of his die-hard followers and “top earners” lived in a tight-knit suburban community just outside Albany, N.Y. Espians, as those followers were called, were apparently unfazed by their brilliant leader’s penchant for 2 a.m. volleyball games and tendency to greet women with a kiss on the lips.

The Vow’s initial focus is on Bonnie Piesse, an actress, singer and Espian who left leaving NXIVM after realizing it’s cult-like, or perhaps an outright cult. Her husband, filmmaker Mark Vincente and high-level Esipan, stays, causing strain on their marriage. It’s not until episode eight that Piesse has endured some of NXIVM’s more vile edicts, such as being made to sleep in a dog bed after a perceived transgression against her husband.

If you think I’ve missed the point, or buried the lede waiting this long to acknowledge the countless women Raniere claims he had consensual sexual relationships with—after joining a female-led pyramid scheme of abuse that included being forcibly held down as a design incorporating Raniere’s initials was branded into their flesh after providing “collateral” (blackmail material)—you’re right. It’s intentional; the series does the same.

Documentary storytelling, especially in a multi-part series, is difficult. In this case, the subjects are putting their lives back together after leaving Raniere’s sphere. Multiple interviewees recount their battles with Raniere after their parting of ways, including endless lawsuits that bankrupt defectors and harassment that keep Piesse, Vincente and others regularly on the move.

As a viewer, it’s hard too. There’s a guilt that comes with infotainment rubbernecking, wanting to see the most salacious bits first, wanting the weirdo to get weirder sooner. It’s a human impulse that existed long before The Vow, but it’s tougher knowing that the documentary’s subjects are in the thick of their own healing as they work to help others disentangle themselves from NXIVM.

But we are rubberneckers, me in particular: I have spent my life fascinated by what in the best cases are referred to as “Intentional Communities” or “communes” and, not necessarily mutually exclusively, “cults.” I’m fascinated by the concept of a group insulating itself from the outside world in the name of improving it.

I’m also fascinated by the idea of a cult sustained by a multi-level marketing scheme not so different than Cutco Knives, but with scarves to indicate levels of success. Still, these are real people who lived for decades or more deluded or abused.

Narratively, it seems the intent was to paint Raniere as a brilliant but eccentric guru at the start, letting his levels of calculated vindictiveness and expectation of dedication expressed sexually—acts Raniere’s defense has classified as consensual, despite the blackmail collateral women were expected to supply—build throughout the series.

It was a storytelling approach that I didn’t find successful. The stories of Raniere and NXIVM have been well documented in the past three years—longer, if you go back to a 2003 Forbes magazine profile. The viewer already knows Raniere is a fraud and abuser.

What would have been more interesting to me was the how and the why. Excerpts from ESP training videos featuring Nancy Salzman have the feel of ’80s workplace safety videos. Vincente and Sarah Paulson (a close friend of Vincente who has taken part in the branding ritual, though physical relations with Raniere don’t seem to have occurred), theoretically two of the organization’s most important figures, seem to hold introductory sessions in what appear to be the secondary meeting rooms of mid-level hotel chains.

What in those presentations was so compelling? It’s a question I would have loved to see answered more fully. If you squint your eyes, you can see how a serene and ostensibly successful guru such as “Vanguard” Keith Raniere could draw in those desperate for a life change, but without that?

Even as a person whose hobby is reading about cults and questionable gurus, I just don’t get it.

We find in the final episodes that Raniere’s “technologies” (programs of study for his adherents) are a slow progression from bootstrap self-help to a system based on women doing their part to aid men in healing psychological wounds from childhood. At these higher levels, Raniere explains that societal ills stem from women, who have been “protected” as “princesses” even while abusing their power over men, and that all men secretly hate women for it.

How men and women reach the level where they can absorb those ideas as truth is a fascinating one. The gradual build to a lifestyle that normalizes women sleeping in dog beds and peeks at a master-slave sex collective based heavily on a pyramid scheme is both disgusting and fascinating.

Since The Vow was filmed, more prominent Espians have left, including India Oxenberg, daughter of actor Catherine Oxbenberg of Dynasty fame and daughter of the Princess Elizabeth of Yugoslavia. Oxenberg’s own series of her time in NXIVM began last weekend on Starz. Curiosity aside, Oxenberg’s perspective as another of the women Raniere abused, may shed light on the sway the program had, especially on younger women.

I left The Vow wondering the size of the collection of branded women Raniere abused, and how many Espians have yet to leave the community. Did Raniere’s conviction mean anything to them?

The Vow can’t tell the story of every person Raniere fooled, but playing down his control tactics may have inadvertently also played down the pain and disorientation of his adherents.

Heart to Art with Janine Mapurunga