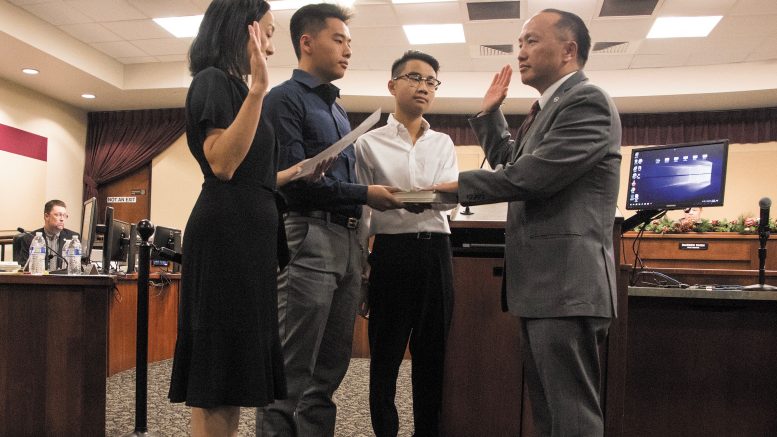 Steve Ly was sworn in for a second term as Elk Grove's mayor in 2018. (Photo by Ashley Hayes-Stone)

As Steve Ly tries to win a third term, he’s stressing his ability to get things as he faces a storm of controversies

Elk Grove Mayor Steve Ly is battling through his toughest political season yet, trailed by accusations he was involved in bullying and intimidation and a veiled disinformation campaign online.

One of his accusers, Elk Grove Unified School District trustee Bobbie Singh-Allen, is running against him. Her campaign is partly a referendum on Ly’s two terms as mayor.

Ly denies being personally involved in the strange episodes that have been reported and says Elk Grove residents are far more concerned about how their city will survive the economic devastation brought on by the COVID-19 pandemic.

He is campaigning on a five-point recovery plan for local businesses while continuing to shepherd his controversial hospital project to completion on the west end of the city. Ly said the public health challenges around COVID-19 are a major wake-up call for the importance of his hospital.

Ly’s last election skirmish in 2018 was against Elk Grove Vice Mayor Darren Suen. This time he faces Singh-Allen, an 8-year veteran of the school board who’s also served on the board of directors for the city’s food bank. Like Ly, Singh-Allen immigrated to California as a child.

She’s running on a platform of bringing greater transparency and public confidence to the mayorship while emphasizing good governance. And she has the endorsements of four City Council members, who also supported Suen.

Singh-Allen told SN&R that Ly’s claims of not participating in the well-publicized harassment are provably false.

“I categorically reject the notion that Steve Ly was not personally involved in the recent attacks against me,” she said. “He and his campaign, led by his personal paid fundraiser–a former city of Elk Grove staffer for him–led a rally to silence me in a debate hosted by the Chamber of Commerce … The chamber asked him to control what was basically a mob outside and he sat there and refused to do anything. Ultimately, I had to get a police escort out.”

She added, “Steve Ly has been an absentee mayor during the pandemic and his legacy is several failed projects around the city.”

Both Ly and Singh-Allen have sparked outrage with comments they’ve made this year. In Ly’s case, it was prematurely assuming Black Lives Matters protestors had burned an immigrant-owned business in Elk Grove. For Singh-Allen, it was her description of the Hmong clan system, which many deemed uninformed and racist. Singh-Allen says her remarks were misconstrued, but that she apologizes to anyone who was hurt by them.

Ly told SN&R he’s trying to cut through the political noise and assure Elk Grove voters he has a plan to hold the community together through COVID-19. In the early stages of the pandemic, Ly was the only member of the council who supported a local eviction moratorium. When Ly encouraged tenants to make their voice heard, the ensuing backlash against the council forced a special meeting in which the moratorium was finally enacted. Ly says he’s trying to bring similar leadership to channeling support and resources to hard-hit businesses and families.

“Parents are overwhelmed,” Ly said. “Some have lost their jobs. Some are having to work from home while their kids having to be students at home. The burdens on families right now are so consuming.”

He added, “We get such a large amount of tax revenue from restaurants, and this pandemic is hurting those businesses, their employees and the city itself.”

Ly recently worked with city staff and his fellow council members to pass a budget that adapted to the estimated $7 million in lost revenues from the lockdown, one that avoided layoffs and a reduction of core services.

The proposed California Northstate University teaching hospital that Ly has worked to bring to Elk Grove is now having its environmental impact report. While some residents of the nearby Stonelake neighborhood are pushing back against the project, and Singh-Allen is criticizing the mayor for taking campaign contributions from its backers, the 2020 reality of Gov. Gavin Newsom counting available hospital beds and ICU beds across the state on a daily basis, regarding whether communities can even function, is being viewed by some as a vindication of Ly’s project.

“It’s very clear that it’s better to have it and not need it, than to need it and not have it,” Ly said. “My father died in Elk Grove of a heart attack and the paramedics weren’t able to get him to a hospital fast enough. To me, it’s a really personal fight to try to bring health care here.”