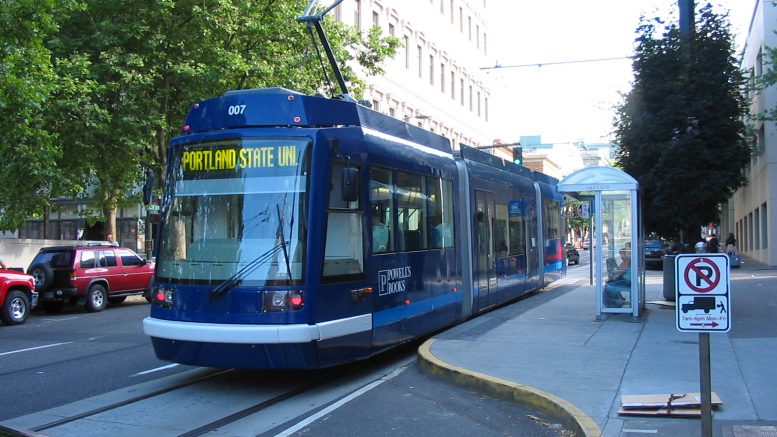 Supporters are pushing a last-ditch plan for Sacramento to have streetcars like those in Portland. (Photo from Wiki Commons)

Editor’s note: The scaled-down trolley line between Sacramento and West Sacramento may no longer be worth the money.

There were good reasons to support the proposed streetcar line between Sacramento and West Sacramento, despite the project’s many twists and turns over more than a decade.

But the last-gasp, scaled-back plan endorsed this week seems much more like a streetcar to nowhere—or at least not very far—and no longer worth the time, effort and money.

Instead of making 21 stops along 4.4 miles from Midtown to downtown West Sac, the trolley would only go stretch 1.5 miles from Sacramento Valley Station downtown to Sutter Health Park (formerly Raley Field) in West Sacramento, with one stop on Capitol Avenue before crossing Tower Bridge.

The ridership will be far lower than the 3,400 a day projected for the original route, and there would be only two streetcars instead of six.

Officials, however, should be asking: With limited money, what’s the best way to help the most commuters and attract the most riders?

Those resources will be far more limited, at least for several years, because a sales tax measure to help fund mass transit is stuck at the station.

The half-cent tax would have financed $8.4 billion in highway and transit projects over 40 years, including nearly $1.8 billion for Sacramento Regional Transit improvements, plus $1.1 billion for light rail extensions in Elk Grove, Folsom and Natomas and increased transit service. But in July, the Sacramento Transportation Authority, comprised of elected officials countywide, voted to pull the measure from the November ballot after polling showed it would likely fail during the COVID-19 pandemic.

Monday night, a divided Regional Transit board of directors, reversing an Aug. 24 vote, approved the scaled-down streetcar plan, in large measure to avoid losing a $50 million federal grant that can only be used for the trolley.

The Downtown Riverfront Streetcar Project has a price tag of $130 million, which includes $19 million in local money already spent on project development since 2015. For construction, which could start in early 2022, $50 million would come from the federal grant, $30 million from a state grant and $19 million from West Sacramento.

So to build this shorter line, another $11 to $12 million must be found.

Plus, $711,000 in local money or grants is needed to finish planning and design. And there still needs to be agreement on who will cover the projected $1.5 million a year in operating costs. The cities would be on the hook because RT, which would own and run the line, would be protected from any construction or operational cost overruns.

Congresswoman Doris Matsui, who helped secure the federal money, and mayors Darrell Steinberg of Sacramento and Christopher Cabaldon of West Sacramento are still on board.

Steinberg told the RT board that the project is an important regional investment that will reduce greenhouse gas emissions and spur economic development.

However, City Councilman Jeff Harris and other opponents say that the project is no longer worth the price to local taxpayers. They argue that RT should focus instead on expanding transit into areas with more potential riders, including Natomas.

West Sacramento City Councilwoman Martha Guerrero, who is running against Cabaldon for mayor in November, said the project is a gamble and no longer a good deal for her city.

Most of the public comment heard by the RT board also opposed the latest proposal.

That isn’t new. Despite fierce criticism from the very start, business leaders, urban planners and transit advocates championed the streetcar.

It would have looped from downtown West Sacramento starting at City Hall, past Raley Field, across Tower Bridge, through Old Sacramento, past Golden 1 Center and the downtown railyard and all the way to 19th Street in Midtown Sacramento.

But in 2015, Sacramento voters who live near the proposed route rejected a tax assessment to fund $30 million of the cost. Then in January 2019, construction bids came in and the lowest was $184 million—$76 million above estimates.

RT officials call the scaled-back project a “starter line” that keeps many of the benefits while taking advantage of completed design, engineering and environmental work. It also does not require building a new maintenance facility, moving light rail tracks from K Street to H Street or forcing as many utility relocations and traffic impacts. Officials say the line can be extended in West Sacramento and Midtown as originally planned once funding becomes available, though there’s no guarantee of that.

During good economic times, the streetcar line seemed like a creative way to get people out of their cars. During the COVID-19 recession, the shorter version seems more like a glorified tourist attraction—and an expensive one at that.