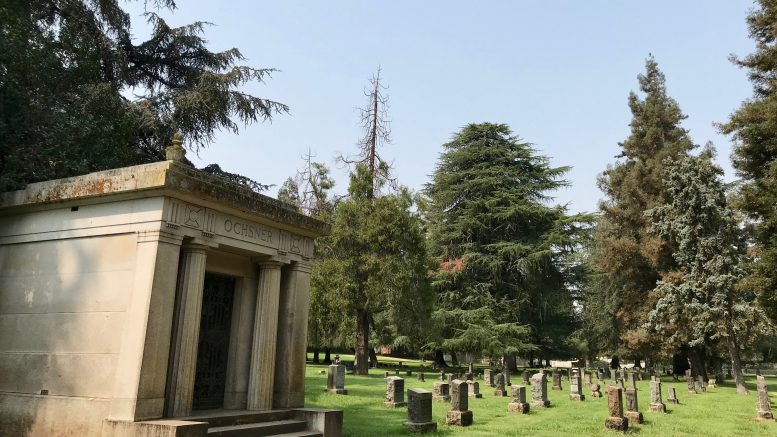 The Odd Fellows Memorial Lawn Cemetery and Mausoleum was the site of the latest homicide in Sacramento County. (Photo by Scott Thomas Anderson)

When Sacramento police officers raced to the scene of a shooting at a 150-year-old cemetery near Broadway on Sept. 11, they were responding to the latest sign that an unusually violent summer may be turning into a surprisingly deadly fall.

Records indicate that between June 16 and Sept. 16, Sacramento police and sheriff’s investigators launched 23 homicide investigations. While two were cases of vehicular manslaughter, the other 21 involved a victim being shot, stab or beaten; the vast majority were shootings.

So far in 2020, homicides are up 42% in the city of Sacramento over the same period last year. The homicide rate across the unincorporated county is trending in a similar direction. Five of the slayings happened downtown, five in South Sacramento, three in Del Paso Heights, five in unincorporated parts of the north county, two in south county communities. There were also killings in Arden Arcade, Rancho Cordova and in the Delta.

The latest incident occurred at the typically serene Odd Fellows Memorial Lawn Cemetery and Mausoleum, one of three historic cemeteries that stand between Broadway and the edge of Land Park. According to police, the killing happened just before 1 p.m. while a funeral was underway. Officers responded to a call for shots fired near the lawn and found 32-year-old Anthony Hairston bleeding inside a vehicle that was further down Broadway. A woman inside the vehicle with Hairston had also been shot. She survived. Hairston didn’t.

Hairston’s killing was the second homicide for the neighborhood in two months. Around 11:30 p.m. on July 3, shots rang out over Seavey Circle, about a mile east of the Odd Fellows cemetery. Police arrived to find two men suffering from gunshot wounds. Both were rushed to the hospital, where one died.

The Sept. 11 shooting also marked the second time this year that someone was murdered at a cemetery in the region. On July 20, 18-year-old Zarrie Allen was visiting a grave at Sacramento Memorial Lawn Cemetery off Stockton Boulevard with friends when she was the victim of a drive-by shooting. Sheriff’s officials say Allen, a Sacramento State student, was likely not the target but rather a casualty of an ongoing gang conflict.

Not long before Allen’s death, sheriff’s and police commanders had told reporters that some 30 people were shot just in the South Sacramento area between late May and late June. A large number of the incidents involved teenagers. Much of the violence, according to officials, was gang related.

Of the 23 homicides in the last three months, authorities have announced arrests in eight cases.

One involves 53-year-old Eugene Pratt, who’s accused of murdering a man inside a North Highlands convenience store on July 5. Sheriff investigators say that Pratt and his victim had gotten into a fight inside the store on Watt Avenue around 1 a.m. Pratt reportedly left, but returned with a gun and allegedly killed the man, though he was shot himself by an armed security guard.

One of the more bizarre arrests was that of 27-year-old Mandiko Kwadzo, a West Sacramento resident. On July 27, Kwadzo and his partner were driving through the Delta with their four young children when their vehicle suddenly plunged into the Sacramento River near the Beach Lake Stables, south of Freeport. Firefighters and Highway Patrol officers found the vehicle partially submerged. By that time, a passerby had freed the four kids and Kwadzo, but the woman was still inside the vehicle. When firefighters finally pulled her out, they realized she had a gunshot wound in her upper body. She was pronounced dead at the scene.

Sheriff’s detectives allege that Kwadzo shot his children’s mother while she was driving, causing the vehicle to careen off the top of the levee. Kwadzo was booked into jail on murder charges.