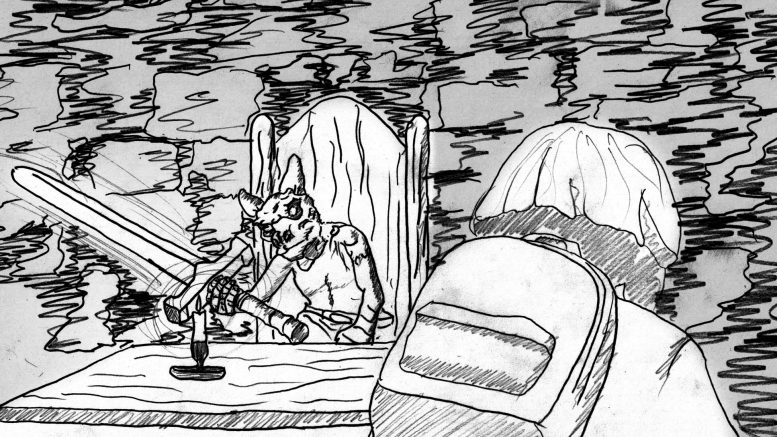 A Kobold with a sword is not a typical sight. In Journey to Scovidria, Luna Steele will come face to face with many oddities she wasn't expecting. (Illustrations by Patrick Hyun Wilson)

After months at home, Luna Steele makes a strange discovery that brings her to the kingdom of Scovidria

This is the story of a Dungeons & Dragons one shot. Dungeons & Dragons is a tabletop role playing game where players and the Dungeon Master create a collaborative story. Sacramentans have been spending their time in games such as D&D throughout the pandemic (read Adventure in Place in this month’s SN&R print issue).

My partner, Ashley Hayes-Stone and I began playing D&D a few months after the stay-at-home orders went into effect, and we haven’t stopped.

I’m sharing a story called Journey to Scovidria, which is set in the kingdom of Scovdria, a home brew setting we’ve been using for our game.

I acted as Dungeon Master and wrote the adventure, and I’ll share tips and tricks that you can use if you are considering picking up the game. Who better to tell you how to play a 50-year-old game than a 20-something who only started the hobby two months ago?

The Room of Arrival

Our story begins with Luna Steele, a journalist living in Sacramento. One night, she discovers a strange door in her home that she had never seen before.

Pressing her ear to the door, she hears depraved snarls and the unmistakable sound of claws against concrete.

Ashley describes Luna Steele quickly collecting materials from her home: a baseball bat, a leather jacket, candles, an AP Stylebook and a torch that she made by breaking off a table leg and wrapping it in a towel.

Behind the door she finds a hyena gnawing on the flesh of a dead Kobold. She makes her way around the hyena to a door on the other side of the concrete room. She opens the door and leaves the room–and that’s when I encountered my first problem.

When I wrote the adventure, I made the assumption that she would fight the hyena and search the Kobold because in the Kobold’s pocket there was a map leading to the next location.

Because she avoided the hyena entirely, I had no way of getting her to the Kobold hideout where she would pick up her quest. So I spawned two more Kobolds outside the room who would lead her to the next location.

Luna Steele hears movement on the dirt road behind her and quickly turns to see two Kobolds running to hide behind a tree.

“I know you’re back there,” Steele says.

One of the Kobolds pokes its scaly head around the tree and asks through sharp teeth, “Who are you?”

“I’m Luna Steele. Look, I know this sounds a little crazy. This door just randomly popped up in my room,” she said. “What, what is this place?”

The Kobolds talk among themselves and tell Steele that she needs to join them to meet someone they call “the Oracle.” Luna agrees to follow.

I successfully guide her to the next location, a Kobold hideout where she meets the Oracle, a 140-year-old Kobold who tells Luna about the plight the Kobolds are facing–a mad mage named Robert who has been terrorizing and murdering members of the Kobold tribe.

The Oracle asks Luna to take the magical Sword of Toturna, which can kill enemies in one strike, and defeat Robert. The Sword of Toturna is based on a real sword called the Nine Lives Stealer, which can be found in the Dungeon Master’s Guide.

Luna also meets Grenigold, a Kobold with slightly higher health points who will help her on her quest and join her to defeat Robert.

But suddenly the tribe is attacked by Robert’s cultist spies. Luna runs out and tackles one of the spies and finds a map leading to Robert’s hideout.

Luna and Grenigold wait until nightfall to make their way, and they are joined by Fibbert, a younger Kobold who can decipher the map.

As they go toward Robert’s hideout in the mountains, they are attacked by Giant Wolf Spiders and fight them off, but not before Fibbert is knocked unconscious. Grenigold and Luna get into an argument and Luna walks off into the jungle.

I needed to get them back together because without the map she wouldn’t be able to make it to Robert’s hideout. So I decided she would encounter a terrifyingly huge Dire Wolf that she would not be able to fight alone.

She distracts the wolf by throwing one of her candles and runs back toward Grenigold. The two make up and continue on their journey.

Cave of the Mad Mage

Late into the night, they make their way to the base of the mountain and see two cultists standing guard at the mouth of a cave.

The trio dispatch the guards with ease and make their way into the cave. Luna takes the cultists’ robes, goes inside and hears two more cultists in the first room.

Hoping to distract the cultists, she throws her AP Stylebook, which makes a loud echoing thump.

Neither cultist investigates the sound as she hoped, but now both are on guard. Instead she decides to put on the cult robes and steps into the room.

“Yeah I just gotta go to the other room,” she says, pointing to the door on the opposite side of the cavern.

“Right. Did you throw that book?” the cultist asks.

“What? Book?” she responds.

“A book just hit the ground. It happened literally seconds before you walked in here, I feel like it’s impossible for you not to have noticed that,” they say.

“What did you say your name was again?” they ask.

In a desperate move, Luna fakes a stomachache. Deception check. Natural 1. The cultist attacks. The second cultist runs into the next room to warn the others.

Grenigold, Fibbert and Luna kill the remaining cultist and proceed through the cave, where they reach a fork in the path. They follow the right path, which drops a short distance and is noticeably wet. The walls are smooth compared to the rest of the cave; it doesn’t bode well for the dangers they’ll face.

They make it halfway down the hall when suddenly they hear rushing water and have to run to evade falling stones and a torrent of poisoned water. But Fibbert doesn’t make it out.

Grenigold dives into the flooded hallway trying to save his comrade and Luna follows suit, but they’re too late. Luna realizes the water is poisoned and drags Grenigold away from his friend’s lifeless corpse.

She resists the effects of the malice poison, but Grenigold is not so lucky. He swallows mouthfuls of the poison and becomes blind.

In the next room, the pair are ambushed by the final three cultists. Grenigold— effectively useless in the battle— is unable to dodge the blow of a quarterstaff and falls unconscious.

Luna defeats the last cultist with a single health point remaining and splits a health potion with Grenigold, bringing him back to blinded consciousness.

In the final room, they find the mad mage Robert sitting at his desk. He gives his villain monologue, but it’s more depressing than it is menacing.

“This staff has caused me a great deal of pain. The visions it gives me as I sleep. Horrible things. It infects my mind and forces me to do its bidding. The worst of all is that I am made to be fully conscious of those horrible acts I’ve committed,” Robert says.

Robert fires a Fire Bolt at Luna, but misses. Luna runs and swings the Sword of Toturn, but Robert uses Shield to evade attack. Grenigold blindly swings his sword, nowhere near Robert.

Robert casts Misty Step, disappearing in a flash and reappearing at the entrance to this room. Luna runs at him again, plunging the Sword of Toturna into his shoulder. The Sword begins to steal Robert’s life essence and he collapses to the ground, becoming gaunt until he is lifeless.

The cave system begins to collapse and Luna grabs Grenigold and crawls out a small tunnel in the back of the room. They escape with moments to spare and not five health points between them.

They trek back to the Oracle and tell her the deed is done. Luna asks how she can make it back home to Sacramento. The Oracle tells her that she does not know.

Luna makes her way north along the road, stopping at Toturna, a small village in this area of Scovidria where she might find a way back.

But until then, Luna Steele will be the wayward journalist who stumbled her way into a foreign world full of sorcery and fantastical beasts. Heralded by the Kobolds as a hero.

Be the first to comment on "Journey to Scovidria"