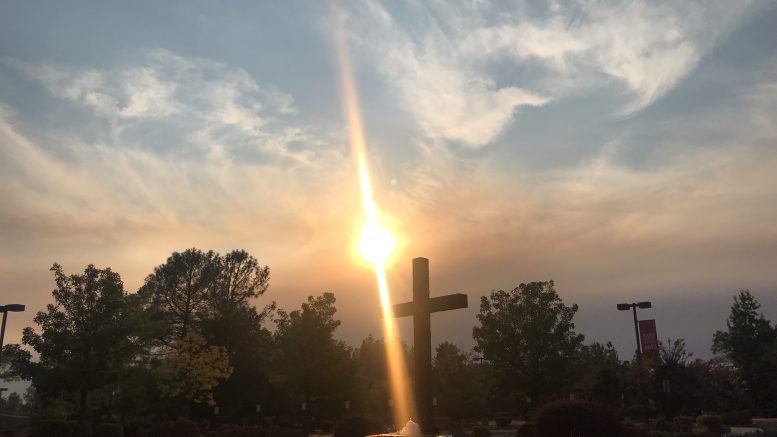 The sun pierces smoke at a church on a ridge overlooking the Jones Fire in Nevada County. (Photo by Scott Thomas Anderson)

It started with a sound like the sky splitting open.

Around 2 a.m. Monday, a crashing clasp of thunder rattled the walls and windows of houses scattered through a thicket of woods along a meadow in northeast Nevada County. Rooms in those darkened dwellings were lit by near-blinding flashes of electricity from the clouds.

For people living in this remote backcountry of cattle ranches and pine forest directly between Grass Valley and Nevada City—including this reporter—any hope that the brief, hammering rainstorm that followed might prevent a disaster was short-lived.

Just before 4:30 a.m., those who were awake in houses on Owl Creek Road could see strange rose and magenta lights shifting through the tree line, illuminating the crawling specter of smoke. A long, droning siren began echoing from a nearby hill. Its wail was followed by the sound of large trucks and heavy equipment rumbling to the west on Jones Bar Road.

Two residents left their driveways in cars at roughly the same time, steering through the shadows toward the brightening commotion. At the last bend in Owl Creek Road, they turned almost directly into an army of firefighters converging on a small, open field where Jones Bar meets Will O Wisp Court. A firefighter quickly moved to tell the woman in the first car that all of the homes down Owl Creek Road, Arctic Owl Road and Hoot Owl Road needed to be evacuated immediately. A wildfire was moving up from the Yuba River drainage canyon just down the way, burning towards the front of Jones Bar Road.

For the hundreds living in the rural surrounding neighborhood, Jones Bar Road was the only path for escaping the danger.

Text warnings began pinging on the phones of those signed up for the Nevada County Office of Emergency Responses’ alerts. Officials began establishing an evacuation center in Penn Valley, as well as an animal shelter at the county fairgrounds.

Escaping cars quickly found themselves backed up into a slow line that was snaking down Jones Bar Road. A few trucks pulling horse trailers raced down the opposite lane toward nearby ranches and stables. Once the vehicle line hit Newtown Road, congestion broke as cars split for either Grass Valley or Nevada City, two of the most architecturally well-preserved and historically significant towns in the California Gold Country.

Jayne Nordstrom, who lives on Arctic Owl Road, was part of that first frantic evacuation after her husband John, who was on motorcycle trip in Montana, received the alert on his cell phone and called her. She was able to quickly gather up both of her dogs and one of her two cats and get off the ridge as the smoke thickened. The images she saw driving away are still vivid.

Cal Fire officials say it all started with a lightning strike that sparked a slope-driven blaze near the bottom of a Yuba River drainage canyon, which then began burning up a steep incline towards the homes on the Jones Bar ridge. The lightning bolt touched down far enough in the canyon that there was time for its blaze to be spotted from Highway 49, as well as for firefighters and sheriff’s deputies to reach the neighborhoods of sleeping people and begin evacuating them. If the lightning had struck further up the canyon, the story might have been different.

The Jones Fire started out as a 30-acre inferno, though its location has been difficult for fire crews to access. By Monday afternoon, hot, gusty winds began blowing through Nevada County. The fire quickly jumped to consume 500 more acres. Some 350 firefighters worked through the night to stop it from moving south of the South Fork of the Yuba River and west of Highway 49, blocking its path to Nevada City, and east of Jones Bar Road, blocking its path to Grass Valley. Meanwhile, roughly 85 members of law enforcement assisted 4,000 residents with evacuations.

“We’ve been seeing conditions out here on this fire from 105 degrees to 108 degrees, with very low humidity and very little recovery at night,” Cal Fire commander Brian Estes said Tuesday morning. “And with that has come some very dry, hot northwest winds.”

With the Holbrooke Hotel’s restoration, a piece of California history gets second life

Be the first to comment on "Fire from the sky"