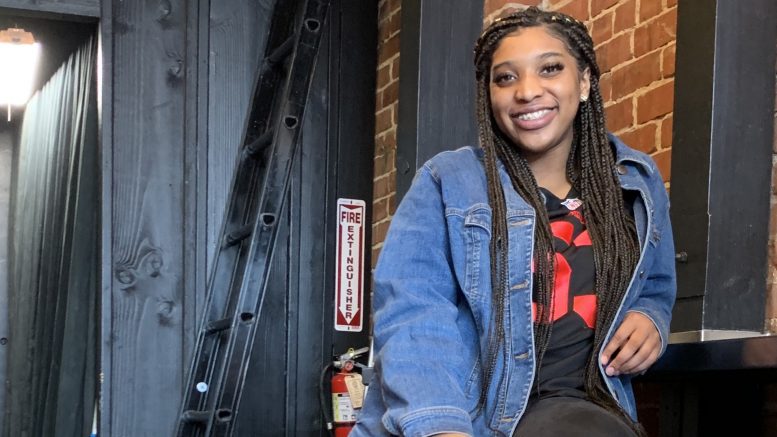 It was Chianne Rhodes Carrier’s first performance, a talent show put on by a sisterhood group she was in. Standing on stage, she began her spoken word poem about a friend who had been hurting themselves. When she finished the poem, the room full of parents of her fellow sixth graders fell silent.

Worried that her parents might find out about her poetry and its mature themes, including her own bisexuality, Rhodes Carrier adopted the pseudonym Cloudy when a friend compared her hair to a cloud.

“Then my mom came to one of my shows, and she heard a poem I had called ‘Old Testament’— it was about me comparing this girl that I liked, to the old testament,” she said.

After watching her perform, her mother told her, “If you’re going to do your art, do it proudly,” words that Cloudy took to heart.

“Ever since then, everyone knows me as Cloudy and Chianne,” she said.

Cloudy began working as the youth adviser for the Black Artist’s Fund, held an internship with Crocker Art Museum‘s community outreach program Block by Block and is one of the 2020 Sacramento Youth Poet Laureates. That’s in addition to the seven clubs she was a part of, the two jobs she worked, taking care of her younger siblings and maintaining her work in high school.

One of her projects is a book of poetry titled, Receipts of Ungiven Gifts, a selection of poems about love, sexuality and a high school romance turned sour.

“I’ve always been a romantic I guess,” she said. “I watched the rom coms and romantic movies and the chick flicks and stuff. I’m all into that stuff. When I got into high school I expected to find the love of my life and it was going to be a fairy tale.”

It wasn’t. “Second day of school I met this dude and I completely fell in love with him, at fourteen,” she said. “He broke my heart. I wasn’t ready to do sexual things with him… he went outside of our relationship for that.”

The relationship continued for three years, and Cloudy wrote about her experience until she compiled poems about him.

“My friends kind of got tired of me talking about the situation, and so I started writing about it and someone was like, ‘You write so many poems about him, you should just write a book,’” she said. “So I did.”

In one poem in Receipts of Ungiven Gifts, titled “An ode to my one night stands lover,” Cloudy writes from the perspective of the mistress, exploring her mentality, insecurities and thoughts, without making apologies or excuses.

“Why wouldn’t I take the opportunity to be in the room, to pave my own path, to be happy… I’ve just always had the mindset of, just get it done.”

Cloudy always knew what her next book would be about.

She is working on Mahogany Letters, compiling the stories and experiences of Black Americans into poetry. Including her father’s experiences growing up and the experiences of pregnant Black women being turned away from hospitals, Cloudy was stirred into writing the book after the killings of Ahmaud Arbery, Breonna Taylor and George Floyd.

“I have two little brown brothers and I’ve already lost one of my older brothers to violence. Just recently I lost my ex-boyfriend to violence, too…. I’m tired of seeing brown bodies kill each other and get killed by the people who are meant to protect us,” she said. “It just doesn’t make sense.”

Although she is ready now to write Mahogany Letters, initially she lost her motivation to write.

“I was like, ‘I just need to sit here, mourn, think about how to heal from this and how to help other people heal,’” she said. “And, how to explain to my brothers that this has happened again, that they can’t go for a jog anymore, that they can’t play basketball at the courts anymore. It’s sad.”

When she began to write again on May 30, she said she had a clearer vision of what Mahogany Letters would ultimately be and the motivation came back.

“It was like it flipped my switch completely off and then flipped it back on and the light was even brighter.”

Be the first to comment on "Heart to Art with Cloudy"