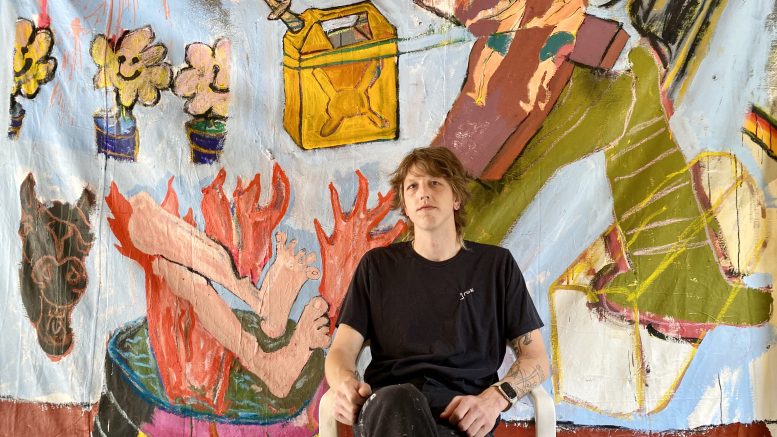 “I have a saying that goes, ‘Behind every large political issue, there’s a smaller socially-minded issue that most likely comes from someone’s fucked up childhood.’”

So says Darby Madden Gross. While he says his paintings are not overtly political, he doesn’t shy away from politics in his work—including a series of paintings of the White House, highlighting the lack of response from the president following weeks of Black Lives Matter protests.

“The tyrant of a leader that we have right now, I frankly just think he’s just a little boy gone wild. I don’t think he has any connection to the world that we’re living in right now,” he said.

Through his art, Madden Gross responds to the state of the world and speaks about the daily human experience, searching for a way of affecting change.

“It’s always been to share my two cents and add in to this worldly conversation that we have,” Madden Gross said. “How do we push forward? Grow our consciousness to a larger level? How do we come together?”

He believes that the role of an artist is to be in service to the everyday person, to record their experience and consider the direction that the world is moving.

“There is this deep interconnection between what I’m feeling and what everyone else is and I’m trying to tap it to that thing that levels us all out,”

Inspired by his “punk rocker” father, his first foray into creative expression was through hardcore bands, playing loud, fast, aggressive and political music.

His music ultimately translated into his painting as he grew more serious about the medium.

“My father has always believed in education very heavily and especially self-education,” he said. “[He] always filled me in on the lack of education in the system. For instance, they don’t teach us that we stole this land from the natives.”

But after eight years at university and a year in France studying painting, Madden Gross felt a push: To forget everything that he had learned.

“As an artist, you have to have a unique voice,” he said. “I had to try to force myself to forget the generic process that they teach you, and I had to find my own.”

Following his graduation and a four-month journey across the country, Madden Gross moved to Sacramento three years ago in search of an art community.

“I’ve been falling harder for Sacramento every day,” he said. “’It’s a big city in a small city’s body,’ I always say.”

It didn’t take long for him to discover the art scene and carve out a place for himself. Since June 2019, he has organized monthly exhibitions at Milka Coffee, called Milka’s First Fridays, for Sacramento’s underground art scene.

Those exhibitions continued until February, when they were cut short by the coronavirus restrictions.

“My intention was to bring artists together, for us to all have that moment where we’re like, ‘Okay, there are other people out here that are doing what I’m doing,’” he said.

Madden Gross also sought recognition from galleries such as B. Sakato Garo. “I kept bringing him my work over and over again to the point where sometimes I was like, ‘This is not working,'” he said.

Ultimately, however, his efforts paid off: In August, B. Sakato Garo will feature Madden Gross’ work in a group show alongside Jupiter the Artist and Anthony Silva.

Madden Gross’ painting process involves applying thick layers of paint on top of each other, combining recognizable forms with non-representational ones.

“I don’t have like a pre-prescribed image or overall composition that I’m going for,” he said. “I kind of let it sort itself out, and then a certain point, there’s like an aha moment.”

The boxing ring is prevalent in his work. In a piece titled “Cheddar Bank: in the Trenches,” a boxing ring sits center stage with the words “your house” hovering overhead. Bright orange flames engulf the bottom third of the piece. A gravestone, intestines, a pill bottle, a dinosaur-like head, dirty socks with a cigarette taped on top and the blackened roof of some government building populate the frenetic canvas.

“I think it really shows my process, these weird unconnected images that I have chosen to put together— because they do have a connection,” he said “It’s talking about how you deal with your life daily.”

The painting is loose and wild; some shadows escape the bounds of the objects with which they seem to be connected. Objects protrude off the canvas, including a piece of paper mostly covered in the fire with the words, “I’m okay right now.”

“There is this deep interconnection between what I’m feeling and what everyone else is, and I’m trying to tap it to that thing that levels us all out,” Madden Gross said. “But what is that thing? It might be a lifelong lesson/journey to find what is the deeper inner connection between us all.”

Heart to Art with AndYes