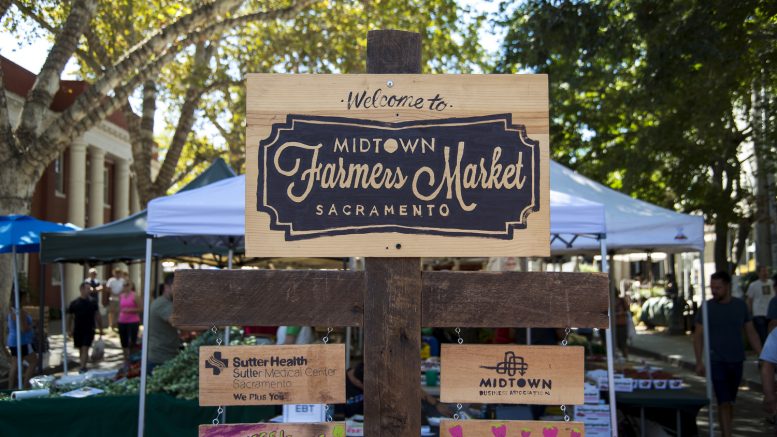 On any given Saturday morning, rain or shine, the Midtown Farmers Market is filled with as many as 90 vendors selling fresh produce, artisan goods and wares that stretch over two city blocks in the heart of the Lavender District.

But it wasn’t always that way.

Unseen Heroes, an award-winning events and marketing agency in Oak Park, was hired by the Midtown Association to run the day-to-day operations. With that contract, Unseen Heroes says it not only introduced its extensive list of diverse vendors to the market, but also grew its social media presence from 253 followers to more than 31,000 on Instagram. As years passed, the market eventually expanded from one to two blocks to accommodate the growing list of vendors, who sell everything from fruits and veggies, to empanadas and handmade jewelry.

So it was a shock to Unseen Heroes’ co-owner, Roshaun Davis, when he received an email from the Midtown Association’s executive director, Emily Baime Michaels, stating the contract between the two organizations was being terminated as of June 1. Unseen Heroes’ last day operating the market is Saturday, June 27.

“These relationships are ours. We built these relationships, we leveraged our relationships and had people come into the market that would not necessarily have even done business with Midtown [Association],” Davis says. “It was just that bewilderment of like, ‘How are we going to make this work?’ For us, it’s always been community first, so we didn’t want to pull all the vendors away from the market.”

SN&R asked Michaels why Midtown Association made the decision to split from Unseen Heroes during the height of farmers market season. She says it was due to “18 months of performance issues.”

“The majority of the performance issues are ones that they themselves actually document on worksheets that they turn into us every month that talk about the performance of the market,” Michaels says. “Our market manager that works for Unseen Heroes, their responsibility is to fill out how many vendors we have, whether we have all their insurance on file, whether we posted correctly on our social media—all of the pieces that come with running the market, and consistently, those were not being completed.”

“I’ve only been with this organization six months, and since I’ve been here, a big part of my job was making sure that the insurance situation was met. And I’m very on top of paperwork and making sure that permits are filed—and that everything is filed to a ‘T,’” Rodriguez says. “I can’t speak to what they did before I came on, but what I know from starting January forward, everything that I’ve done has been to a ‘T.’”

Under the contract, according to Davis, Unseen Heroes received 75% of market profits and Midtown Association accepted 25%, plus sponsorship monies of as much as $30,000. When negotiating a potential new contract with Michaels, Davis says he was offered 5% of the market’s profits, but under the conditions that he would not speak to the public about the deal and would also have to sign a 30-mile non-compete clause. That would mean Unseen Heroes wouldn’t be allowed to hold such events as Gather, its annual community party in Oak Park.

“For us, our relationships are still our relationships. A lot of those vendors did not come to the Midtown Farmers Market. They came to Gather to be in Gather and we said, ‘Hey, we have another opportunity for you to make money and get out in front of a different audience. Why don’t you come over to the Midtown Farmers Market?’” Davis says. “That’s where a lot of people came from, and that’s how they started the market was through us in that way.”

Rodriguez, who says she has operated various farmers markets for the last five years in Hayward, Vacaville and in San Rafael, says that the Midtown Association chose to hire a woman with no farmers market management experience to replace her.

Michaels told SN&R that she’s confident her team will be able to take over and run the market successfully.

“I’m not in a position where it’s appropriate for me to speak on any of my employees’ behalf about their personal information, but I am comfortable to say that we are more than competent to continue to run the market,” she says.

Robert Cao, owner of Wheel Lemonade, a longtime vendor in the market, told SN&R that he was disappointed to hear of the split. He says Unseen Heroes took a chance on him when he first opened his small business. Now he owns a brick-and-mortar.

“It upsets me to hear how the Midtown Association (MA) has dropped Unseen Heroes,” Cao said in a written statement. “It just doesn’t seem right that you just release someone (UH) after all the hard work they did planning, promoting, and popularizing the current MFM. … Unseen Heroes is also a small business, so I am sure they are affected by the economic effects of this pandemic.”

On recent Instagram posts, the Midtown Farmers Market blacked out its page for Blackout Tuesday in support of Black Lives Matter and also posted in support of the LGBTQ community.

But Rodriguez argues that those posts run counter to how the Midtown Association is treating Unseen Heroes, which is Black and Latina owned.

“Again, they can’t stand behind Black Tuesday because they’re not standing behind a Black-owned business currently. You can’t post something and say you’re supportive of the current movement, but not be aware of the decision you just made to destroy a Black-owned business,” Rodriguez says. “I mean, this was their chance, especially given the times we’re in, and it’s not even to say that they should’ve hired me. … but they could’ve hired a Hispanic, they could’ve hired a Black person, or any person of color, or a gay person for that matter, but they didn’t. They chose to go with what they know best, and it’s the white woman.”

One recent Saturday, the Midtown Association passed out letters to each vendor notifying them that they were taking over the market in-house and a new farmers market manager would be coming on board.

Some vendors turned to Unseen Heroes for answers. So Davis says he sent out a statement to clear the air, which was met with an email from Michaels on June 9.

“Good afternoon Roshaun, we have prepared a counter offer that laid out terms not far from your request in efforts to support your business and then received a copy of the UH letter issued,” the email said. “This by your own authorship has ended our ability to find a common space to work together.”

When SN&R spoke to Michaels on June 17 and asked whether Unseen Heroes would be compensated for its part in building the market throughout the years, she said an invitation is still out to them.

“I’m not sure if that’s something that they’re going to accept or not. We also asked if they would like to move into a role of creating video content to tell the stories of our small business owners for the impacts of COVID … so that conversation is still open at this time,” she says.

But Davis told SN&R there has been no communication on an offer between Midtown Association and Unseen Heroes.

“There is none,” he says. “There’s pretty much been no communication on the negotiation side, just the back and forth between the day to day operations of the market, which have been, in lack of better words, volatile.”

When demonstrators are marching through Midtown in support of the Black Lives Matter movement, the decision to break ties with a Black-owned business doesn’t sit well with Davis.

“Back in the day, it was the slaves out in the fields doing the work and then turning that work in so that the white slave masters could profit. It just feels like we’re running in that same operation,” Davis says. “We’ve done the work, boots on the ground, day in day out for the last five to six years. Now that it’s profitable and they need that profit, and they feel like they have the authority to just take it away without any sense of equity at all. That’s just reminiscent to another time in history.”