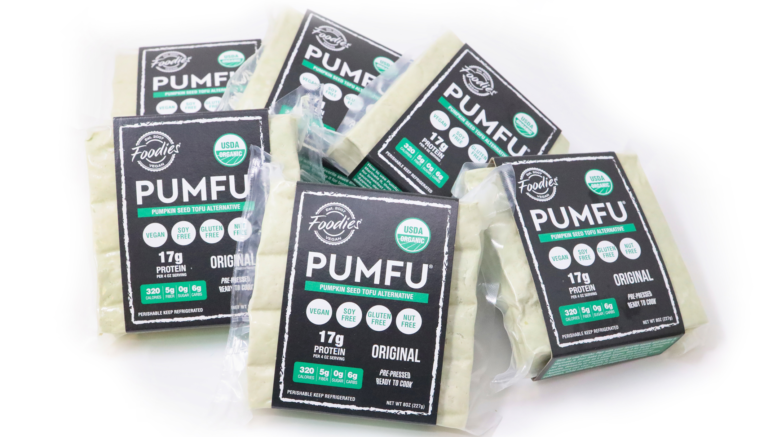 A review of whether or not pumpkin seeds make a good tofu. Not so much. (Photo courtesy of Foodies Vegan)

It’s ironic that after decades of veg folk trying to sell the general public on the idea of tofu as a meat replacement that now, in 2020, we have a company trying to sell us on mashed pumpkin seeds as a tofu replacement.

There are reasons, of course: food allergies, a handful of studies showing negative effects of soy in large amounts (and an equal number of studies refuting those claims), plus a push back against monoculture and corporate farming. Soy products are not for everybody—and a company called Foodies Vegan is there to serve that niche.

Let’s leave the company seeking to trademark the word “Foodies” for another day and talk about the product. Pumfu is made of only pumpkin seeds and water, packed into a dense block similar to the firmest of firm tofus. That’s where the tofu similarity ends.

Pumfu’s light green color isn’t particularly off-putting: it’s made from ground seeds, after all. What’s off-putting are the bits of unblended seed in what’s ostensibly faux tofu. I’m one of those rare folks who enjoys tofu in its unseasoned, unmarinated form, but those bits of seed, as well as an unsettling and lingering bitter aftertaste, kept it from passing that first hurdle.

The packaging suggests Pumfu can be blended to make “creamy sauces, desserts, or smoothies.” It’s clear based on its firmness that Pumfu absolutely wouldn’t work in any of those scenarios.

So I fried it.

Knowing in advance that the aftertaste was likely to hit hard, I tried three different preparations: a control group of cubes fried lightly in vegetable oil, a set of cubes marinated in soy sauce for 15 minutes and a final group cooked in a commercial sweet and sour sauce.

The control group did not bode well for the rest of the experiment. Pumfu foams when it cooks. This may well be from its high fat content: one serving of Pumfu has 36% of the recommended daily allowance of fat. And for vegans, who don’t usually end up with much saturated fat in our diets, Pumfu’s 29% of daily recommended saturated fat is staggering. It’s got close to double the amount of protein as the same serving of tofu, but for me, that’s not a fair trade-off.

Back to the foaming blocks: They seared nicely despite (or because of?) the foam, but the aftertaste was just too much to bear. Test two: The marinade, was slightly better. Pumfu allowed the liquid to permeate reasonably well, but again that aftertaste. Same goes with the premade sauce: That acrid taste lingers. The indigestion also lingers: The unpleasant after-effects of my Pumfu dinner lasted until lunch the next day.

I’m disappointed because I have many friends with food allergies, and because Pumfu checks all the food-safety boxes: organic, soy-free, gluten-free and nut-free. I wish I could say nicer things because I’m also a big fan of food oddity. I hope somebody likes Pumfu, I really do. But between terrible flavor, high fat and lingering after-effects—I can’t imagine who that person might be.