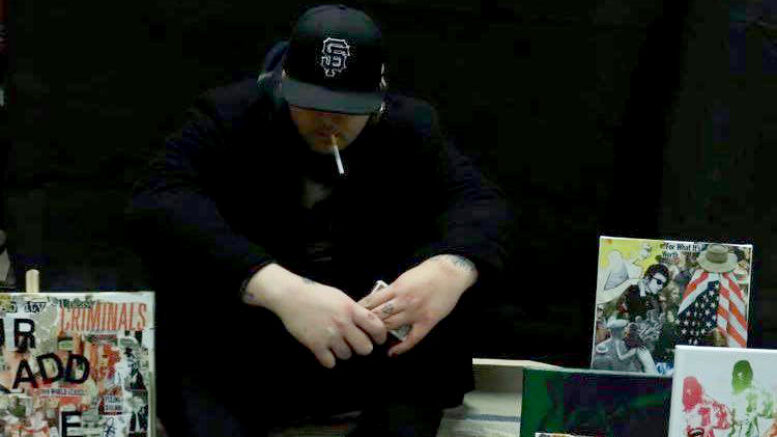 Tyler Boynton is a master of collage. (Photo courtesy of Jordan Gonzalez)

Tyler Boynton was 11 years old listening to “shitty rap music” and had never been exposed to the art world, until his uncle from the East Coast came to visit Sacramento. Along with a copy of his favorite alt-weekly—Sacramento News & Review—Boynton’s uncle brought with him a Rolling Stones album, a Beatles album and an art book with the art of Jean Michel Basquiat.

Boynton said he was immediately captured by the work and wanted to express himself but was disappointed by his own inability to draw. Today, using clips from a variety of magazines and newspapers, including SN&R, Boynton creates frenetic multimedia collages chock full of morbid imagery and striking formal decisions.

He calls the collages “car crash concepts,” a reference to the morbid curiosity people feel when passing a car crash. You may not want to see what happened, but you can’t look away.

So let’s learn more about the “Car Crash” art of Tyler Boynton.

The work you make is fairly dark, where does that morbid curiosity come from?

When you’re looking for stuff for your collages, do you have an idea for a final piece and then go in and find things that match, or is it more like flipping through the pages looking for something that stands out?

It’s just so free-form. My friend was joking the other day, but he called my art like free-form jazz because he sat there and watched me do it and there’s no—I don’t want to say there’s no rhyme or reason to it because there is—but it’s very loose, so it just kind of happens. I don’t wake up in the morning and think I’m going to make a morbid canvas, you know, I’ll be flipping through a magazine and it just kind of starts from there. When I see the image, I almost see it differently than the way it’s printed. So if I see an image I’m like, “Oh, this would look better this way, or this would look better that way.” So that—that has a lot to do with it.

You mentioned that it’s sort of a free-form jazz kind of way of going about it, so at what point do you look at a piece and say ‘Okay, this is done, I can’t add any more to it, I can’t take anything away, this is in its final form.’

I don’t know that any of them are ever fully done. Sometimes, like the other day, I was just looking around my room at all my pieces and I grabbed a few of them and added little things, so I don’t know that there’s a moment where I’m like, “I can never touch this again.” There are definitely moments where I feel that, “This one’s okay, I’m going to post it.” And then usually once I post it I won’t touch it again.

Do you consider your work as recontextualizing the images that you find in media and some of the words?

Absolutely. ‘Cause a lot of the phrases in my pieces are different parts of a sentence. When I first started doing it, I was calling it “ransom graffiti” because it reminded me of like old ransom notes from the ’20s.

What was it about Sacramento News & Review that made you want to use the paper in your work?

Sacramento News and Review isn’t really shy about talking about serious issues, and a lot of those serious issues I was able to use in my pieces. One of my biggest things that I did was when the Mike Brown killing happened. You guys covered it pretty extensively, so I made a big piece out of that.

Now that Sacramento News & Review doesn’t have a print edition anymore, where are you getting your supplies?

Now I’m buying magazines, books, I pretty much get my supplies anywhere I can to be honest. Anything that I find interesting or that would fit in any little corner of my canvases I grab.

What are your aspirations as an artist?

Heart to Art with Brandon Gastinell

Be the first to comment on "15 Minutes: Tyler Boynton, multi-media collage artist"