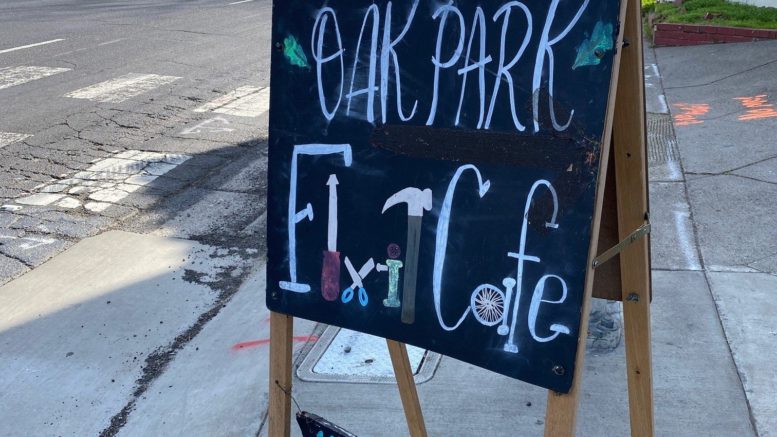 The Fix-It-Café in Oak Park canceled its monthly meeting for the first time in March due to the coronavirus crisis. (Photo by Lindsay Oxford)

In February at Oak Park’s monthly Fix-it-Café, sewing machines whirred at one table while co-founder Dan Hagstrom used a whetstone to sharpen a set of knives.

“I just learned [how] a couple of years ago,” said the 30-year resident of Oak Park, laughing. “I just figured I could learn how to do this and so with all the masters on YouTube I learned how to hone my skills.”

A few people mingle with nothing to fix; they’re just there for coffee and conversation. Held for two years at Oak Park United Methodist Church on Broadway, it’s a monthly neighborhood gathering where “neighbor” is a term used loosely. The event welcomes volunteers as well as those seeking help coming not just from Oak Park but also from Midtown, Curtis Park, Tahoe Park and South Land Park.

The Fix-It-Café is the definition of a “third space,” a place that brings a community together. Also known as “third place,” the term was coined by sociologist Ray Oldenburg in the late 1980s and says that while a third space can be any sort of gathering, many exist as community hubs, connecting members of different socioeconomic groups for mutual aid.

Though the Fix-It-Café decided to cancel its March gathering before the county and statewide stay at home orders, it was a difficult choice for organizers, who worried that it would worsen social isolation and loneliness in the neighborhood.

“There aren’t a lot of spaces available where everyone is genuinely welcome and wanted as a member of the community regardless of ability to pay,” said Fix-It-Café co-founder Sam Greenlee.

Sacramento’s largest third place, the Sacramento Public Library, is also under a COVID-19 quarantine. After incremental cancellations and closures, the 26 branches and their array of community support programs are unavailable until at least April 1.

It’s unclear whether the stay at home orders will “flatten the curve” of coronavirus—or when the directives might end. The Fix-It-Café, like many other gathering spaces in Sacramento, is taking a cautious approach. As social distancing has morphed into stay at home, the return of the third space seems more and more out of reach.

But those who believe in its necessity are ready: “[As] soon as we are allowed to gather again, we will be sure to do so and to continue to refuse to cancel for anything short of this sort of crisis,” Greenlee said.

Be the first to comment on "The loss of third space"