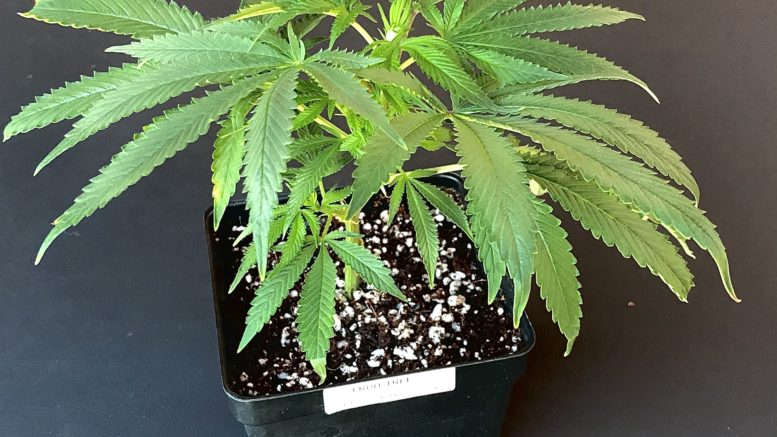 This Fruit Tree clone from Vibe dispensary in Sacramento should be ready for harvest in about four months. (Photo courtesy of Ken Magri)

‘Homegrown’ flowers can supplement efforts to stay in supply

The coronavirus stay-at-home orders bring back memories of my younger days, when trying to find good marijuana was an ongoing concern. “Fear of running out” was a commonly used expression among stoners from the 1970s through the ’90s.

Back in the day

Purchasing on the illegal market started with finding “a connection.” Driving over to that person’s house meant staying for a half-hour, even if you didn’t know them very well. (Too many quick arrivals and departures would cause the neighbors to be suspicious.)

The marijuana would either be green, brown, fluffy or smashed. Whatever the dealer had was what you could buy—take it or leave it. In the late summer, supplies typically ran out before the new harvest came in, so any “scruff weed” was acceptable.

Fear of running out forced my friends and me to prepare for a worst-case scenario. We never threw out roaches. Instead, they were unraveled and crumbled into an emergency jar. If there were pot pipes lying around, we scraped the tar (now called rosin) out of the bowl and added that to the jar as well.

Another tactic was seed-sifting. In earlier decades, before seedless marijuana, most smuggled cannabis came in pressed “bricks” from Mexico. They were full of stems and seeds, which required separation from the smokable pot. Seeds were stored in separate jars and often contained tiny bits of leftover cannabis from the sifting. Those bits could be extracted with a second sifting.

From high school onward, my friends and I grew marijuana in backyards, attics, on rooftops and up in the Sierra as a way to supplement our personal needs.

Cannabis in a new decade

In the COVID-19 era, fear of running out has made a big comeback. The unregulated seshes are virtually gone. Unlicensed vendors have resorted to secret delivery arrangements with meet-ups in public parking lots.

On the other hand, Sacramento’s licensed cannabis delivery services are booming even with a national state of emergency—and they’re doing a great job of getting products to their customers.

I have used two delivery services so far. The products were easy to order online and were dropped on my porch in a clean box that I easily sanitized before opening.

Since many people have more free time these days, homegrown cannabis is a great activity to pass the time. Everything needed to set up a small indoor grow can be delivered or picked up curbside, and it’s ideal for small spaces such as a closet. Using a grow tent, you can produce several ounces of quality cannabis in one year.

Grow tents can be purchased online and come in several different configurations. Each one has ventilation windows, reflective aluminum on the inside and openings through which to run electrical cords. A one-plant tent measures 24 by 24 inches and costs $30. Larger tents cost around $200, but will accommodate as many as six plants.

I found a 24-by-48-by-63-inch tent for $70 and a full-spectrum, 1,000-watt LED light box for $40. It cost half as much as the 360-watt lighting I used three years ago. Full-spectrum lights imitate outdoor sunlight to produce higher yields. This new setup allows me to grow two large plants at once.

While most indoor grow operations are hydroponic, I went with traditional soil in a fabric grow container. Soil is less expensive and less fussy, but it can still produce a high quality plant. The total cost for two grow containers, soil, a power strip, a timer and a small fan to promote air flow was $190.

In one container, I planted a clone called “Fruit Tree,” a cross between Forbidden Fruit and Purple Punch that I bought for about $20 from Vibe dispensary in Sacramento.

Kevin, the plant manager at Vibe, suggested Fruit Tree out of a half-dozen varieties because I asked for a “short, bushy plant that won’t outgrow the tent.”

In the second container, I used a seed that I cultivated last year from Kosher Kush and Pink Alien Fire strains. The advantage to using seeds is that they develop a taproot. Anyone trying to create a “mother plant” to cut clones from will want a hearty plant started from seed.

But my seed isn’t feminized. The risk of using one’s own seeds is that some will become male, which wastes weeks of growing time. Other than providing pollen for new strains, male plants are worthless.

When purchasing seeds online or at a dispensary, make sure they have already been “feminized,” which means they are guaranteed to be female plants.

The “Amsterdam technique” is the most reliable method. Fill a dish with filtered water and drop in a folded unbleached paper towel (Starbucks napkins work well). Place a cannabis seed between sheets of the submerged paper. Leave the dish in the dark for a couple days, or until a white sprout pokes out from the seed, and make sure that the seed is always wet.

Another technique is known as seed-scuffing, which isn’t necessary, but helps. Some growers prefer to scuff up part of the seed with fine sandpaper before germinating. This creates a weak spot for the new growth to break through. Once the sprout is about a half-inch long, plant the germinated seed in potting soil a half-inch deep.

One of the most common mistakes is overwatering your budding plants. Only water when the soil surface is dry, with no dampness 2 inches down. Adding nutrients doesn’t have to be complicated. Use one type for the grow cycle and one for the flowering cycle, but be careful not to over fertilize. My preference is a steadier diet of diluted plant food that I find to be more tolerant and less of a shock to the plant.

Indoor growers must initiate their own flowering period. After several weeks, cut the light cycle from 22 hours a day down to 11 hours. The plant will think autumn is coming and start flowering. At that point, sit back and watch the buds become more dense and sticky. And once those clear “noids” on the flowers turn to amber—harvest time has arrived.

By picking cannabis strains with short grow cycles, it is possible to bring in three crops per year. My plants should be ready in four months, so I’ll report back on how they do.

Be the first to comment on "Growing cannabis during coronavirus"