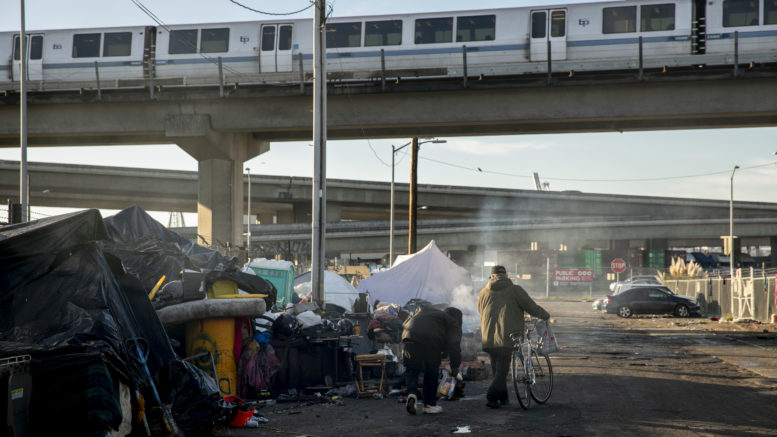 Homeless people in California often live in tent encampments, like this one in West Oakland. (Photo by Anne Wernikoff for CalMatters)

We need to help the mentally ill living on our streets

I have waited 20 years to hear a governor deliver a State of the State address like the one Gov. Gavin Newsom gave on Feb. 19.

Much of my political career has been spent trying to draw attention to the profound deficiencies in California’s mental health system, so I was immensely gratified to hear the governor make it the focus of his address. Gov. Newsom’s commitment makes me more hopeful than I have ever been that we can make real change.

Californians are clearly eager for their leaders to tackle these profound problems. They are confronted every day with one of the most visible consequences of the failure of the existing system—the thousands of people living on the streets in conditions that are unsafe and degrading.

This disturbing reality has spurred cries for an overhaul of the Lanterman-Petris-Short Act, passed in 1967, which restricts the ability to institutionalize people against their will to those cases in which they are gravely disabled or pose a danger to themselves or others.

I agree that we need to consider any changes to the that law or its implementation that would help families get help for their loved ones and that further assure we have more ways to help for those with severe mental illness living on our streets. Living outside long term reduces a person’s lifespan by an average of 25 years.

The Steinberg Institute, the mental health advocacy organization I founded in 2014, last year successfully pushed for the Joint Legislative Audit Committee to conduct an audit of the LPS Act, which should be completed soon. I hope the audit will provide a pathway for us to refine our approach in a way that both respects civil liberties and refuses to accept the current reality of thousands of people dying unnecessarily.

I also know that focusing solely on the LPS statute is not enough. I have been involved in every previous attempt to change the involuntary treatment laws in California. Few have succeeded at all, and those that did have brought only modest change.

The LPS statute is long and complicated, and a deep philosophical divide separates those who want to amend it to allow for more involuntary treatment, and those who think improving services and housing are the key to helping more people.

I think a better way to reform the LPS statute may be to look outside of it.

Last July, I wrote an op-ed piece in The Los Angeles Times calling for a government obligation to bring unsheltered homeless people indoors. I also called for an obligation for people to take safe shelter or housing when offered. I argued that when we have enough housing or shelter capacity to bring people indoors, they should be obligated to do so.

Could establishing a legal obligation for people to come indoors be a proxy for LPS reform? The simple idea that people must live indoors might have a better chance at achieving consensus than resuming the same old battle over each word of a dense statute.

For too long, advocates of greater enforcement and advocates of more services and treatment have each viewed the situation through a polarizing ideological lens. But even people who could argue for days about the definition of gravely disabled can surely agree that it is unhealthy and unsafe for a person to be sleeping on strip of cardboard on a city sidewalk.

I await the results of the LPS audit in the hopes that it may identify a productive path forward. I also continue to believe that arguing over words is not sufficient. The idea of establishing a legal obligation on local governments to provide shelter—and an obligation to accept it—merits serious attention as a way to get thousands of mentally ill people off the streets. It’s a goal I’m certain we all share.

Be the first to comment on "Essay: More treatment, but also more shelter"