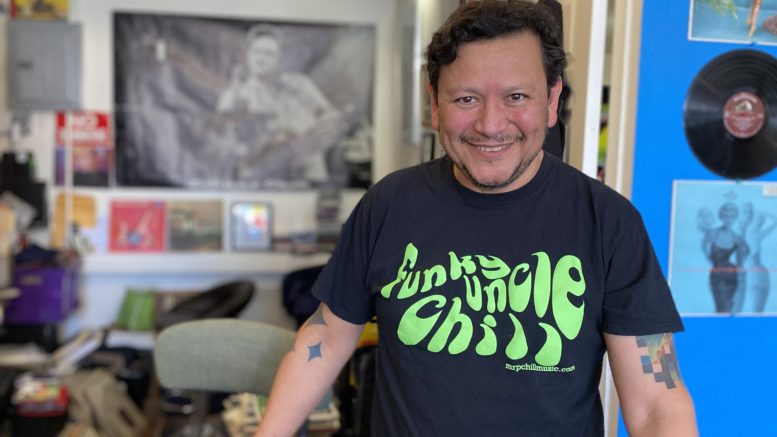 Augie Maravilla originally opened Rocket Records in West Sacramento, but his recent move to Midtown has been a game-changer. (Photo by Lindsay Oxford)

It’s safe to say nearly every music lover has dreamed of owning a record store. Rocket Records opened three years ago in a low-visibility storefront in West Sacramento, but owner Augie Maravilla’s recent move to Midtown has led to increased foot traffic, growing his base of already-loyal customers. SN&R talked to Maravilla about movie scores, Mexican music and record labels.

Do you have a customer that expects a particular genre?

I think every store has its own flavor, and every store will cater to their clientele in some way. In some stores it’s metal and punk … there are some that are more into jazz. I’m kind of all over the place because that’s the record stores that I grew up with and because I like everything … I like a lot of pop. I like pop. I don’t mind pop. I like soul music. Rock, soul. I tend to really favor soundtracks … I really like music scores. I’ve always liked movie music.

What’s your favorite score or soundtrack of all time?

What kind of music did you grow up with?

I love Mexican music … My parents are Mexican. Born in the States, but had to move back to Mexico in the early ’30s … The [Great] Depression hit, Herbert Hoover signs the Repatriation Act and basically kicks all the Mexicans out. Basically, “Your country needs you, your train leaves in a couple of days, be on it.” [Families] took what they could … Both of my parents, when they grew up and realized that they were American citizens, came back. My dad was a big music person, loved records … [and there was] only [one] place in town—this was late ’50s, early ’60s—to buy Mexican records.

Rancheras. José Alfredo Jiménez, Lola Lola Beltrán … a lot of the music that you hear in Linda Ronstadt, Canciones De Mi Padre. That music. I grew up with that music. When she did that album it was like, “Oh yeah, of course.” Somebody’s actually paying tribute and homage to this music of our childhood and our parents. But [my parents] liked American music too. My dad bought my mom a 45 when they were courting—dating—“I Want to Walk you Home,” by Fats Domino.

Do you remember your first record?

No, I’ve always had records. I was raised by teenage girls. My parents both worked … they would farm me out to babysitters, friends that they had, but they also worked, so the babysitting chore was given to their daughters.

Is that where you got your interest in pop?

Oh yeah! My dad would take me over to Tower Records . . . And I couldn’t read, but I knew what records were really good, because of my babysitters. So I knew if it had an orange and yellow swirl, those were really good, those were Beatles or Beach Boys … If it had a map—blue with a little map on top—those were Motown. If it was purple with a yellow arrow, that’s Gordy Records, that’s also Motown. That’s why I’m also hugely a label freak … I kinda know my labels. I get nerdy about labels.