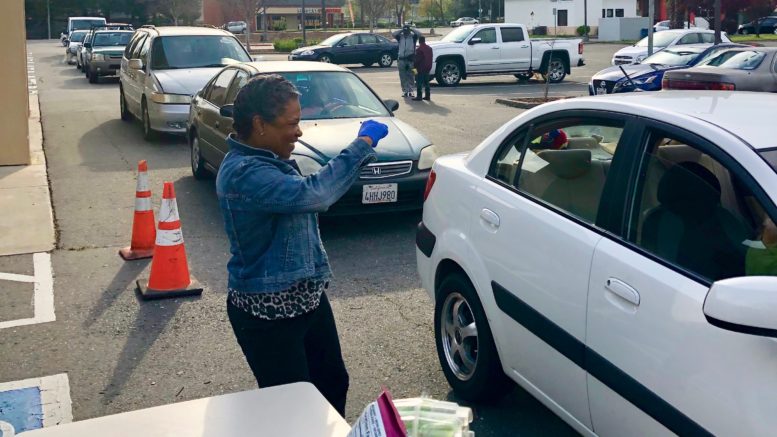 But on this morning of social distancing, Ernst and Rebholtz both had heavy expressions on their faces. The men shared the challenges they were facing—and contemplated the larger challenges everyone may face in the weeks ahead.

Like all leaders near a coronavirus hot zone, Ernst and Rebholtz are trying to navigate a host of issues. Some are practical: How well will Facebook Live services and tech-based sermons work for older parishioners? How should churches prioritize steering limited resources and assistance? How do leadership teams conduct outreach and wellness checks on seniors without accidentally putting those same people at risk?

Then there are the larger questions confronting pastors, priests, rabbis and imams. As Ernst, Rebholtz and Gary Rice discussed that morning in Auburn, a greater, still undefined struggle is likely on the horizon as well, one involving the spiritual and emotional health of their communities.

Even before the coronavirus pandemic, Americans’ average life expectancy had gone down for three years in a row, a stark trajectory for a wealthy nation—and one spurred primarily by drug overdoses and suicides. Now, in a best-case scenario, in which the main impact of coronavirus is an economic recession, faith leaders will be called upon to comfort many more people experiencing anxiety, depression, addiction and a sense of hopelessness. And in a worst-case scenario, they’ll be trying to lead congregations that have lost multiple members to what some will characterize as an act of God.

Ernst, who has been the pastor at Cornerstone for a decade, was not slow to realize the threat of coronavirus. That’s partly because he’s married to a healthcare professional getting continuous updates. Cornerstone held the last regular service for its 150 members at the beginning of March. Now, Ernst is recording weekly sermons and releasing them on the church’s website and YouTube channel. He and his deacons are using Google Hangout for staff meetings and to host bible studies.

Ernst says those were easy calls to make, but other moves aren’t as clear. A good number of Cornerstone’s members are seniors, who are being told to totally isolate themselves for safety. Ernst and his deacons are trying to keep in touch with all of them by phone to make sure they’re secure.

“Our members who are most vulnerable to the virus have to be the focus,” Ernst said. “The big priority right now is getting groceries and supplies to them.”

He’s learning how important basic outreach is, too. One member of Cornerstone, a man in his 90s who lives without television or internet, didn’t even know there was a coronavirus outbreak. Ernst said he had to get the man up to speed on the crisis and provide him with basic information for personal safety.

The pastor is also preparing for the moment when his church will need to use its monetary reserves to assist members suddenly without a job.

“The stress and anxiety people are experiencing is, so far, financially related,” Ernst said. “Some people’s net worth has dramatically gone down, and other people were living paycheck to paycheck, and are at zero-income now.”

Les Simmons, senior pastor of South Sacramento Christian Center, is already scrambling to help members who have been laid off—and having to do it on a large scale. Simmons’ church, which has more than 1,000 members and hosts sermons in five languages, is anchored within some of Sacramento’s most disadvantaged neighborhoods.

After quickly using tech to shift to “a church without walls,” Simmons pivoted to coordinating with food banks and nonprofits to step up its free community meals. Previously, South Sacramento Christian was feeding roughly 1,000 people a month. Now, the church is trying to feed 1,000 people a week through curb-side pickup and food deliveries.

“This part of the city was already a real food desert,” Simmons said. “One of our grocery stores just closed two weeks ago … Right now, looking out for the most vulnerable families in our community is critical.”

Simmons also has to maintain church facilities and continue outreach while still following social distancing rules. He’s modified working hours for core staff while making sure there are never more than two employees or volunteers working around each other.

Simmons said that in coming days the daily tele-prayers he’s hosting, via conference calls that are open to anyone, will give him a better sense of where to focus his energy next.

“It’s a good way to process what the human needs are,” he said.

Rabbi Mona Alfi, who leads Sacramento’s Congregation B’nai Israel, is also adapting so her synagogue can continue its important work. For example, it’s traditional in Judaism that when someone dies, the rest of the community gathers around their loved ones inside the family’s home. One of Alfi’s congregants lost a loved one a few days ago so she is working on a way to use Zoom to carry on its comforting and supportive shiva tradition. She says using tech for solidarity is vital at this moment.

“We’re trying to help people feel connected in real time,” Alfi said. “For our members who live by themselves, they could feel very isolated and alone right now. We also have people who are used to seeing their grand kids two or three times a week, and now aren’t seeing them at all … We have to find a way to make staying at home bearable.”

While faith leaders are responding to their parishioners’ immediate problems, many agree there will be long-term traumas to deal with from coronavirus. The already-grim statistics around addiction and suicide in the United States could get markedly worse.

At the moment, Ernst is counseling people in crisis through FaceTime. But he knows, in some cases, the need for counseling may last far longer than tech can provide. He said he’s never seen a situation as difficult to respond to as this pandemic, and predicts that it will be a tougher cross to bear for Americans than the 9/11 terrorist attacks or Great Recession, partly because it was easier in those situations for people to unite.

“We just have so much uncertainty right now, and that makes the rallying and the unifying really difficult,” Ernst said. “It’s unprecedented.”

Simmons is also concerned that acute anxiety being felt in his congregation will do long-term damage to their mental and physical health. He said it’s important for leaders of faith to stay positive and stay focused.

“There’s definitely a lot of fear, and a lot of panic, and a lot of ‘where do we go from here’ kind of thoughts,” Simmons said. “Our messaging is around hope, and that we will get through this. It has to be about creating community and being there for one another.”

For her 600-plus synagogue community, Alfi is trying to set a tone of mental balance while being realistic about the crisis.

“There are physical challenges and there are spiritual challenges to all of this,” she said. “If you’ve lost all your income and ability to support your family, that’s terrifying. But for others, there’s also those feelings of depression and a sense that you don’t have any control over what’s happening.”

“I try to be an optimist,” she added. “You can’t control what happens to you, but you can control how you respond to it. You can either look at staying at home as a disaster, or you can look at it as a chance to reboot, to breathe the fresh air, to reconnect with friends by phone—and maybe look for the hidden blessings.”