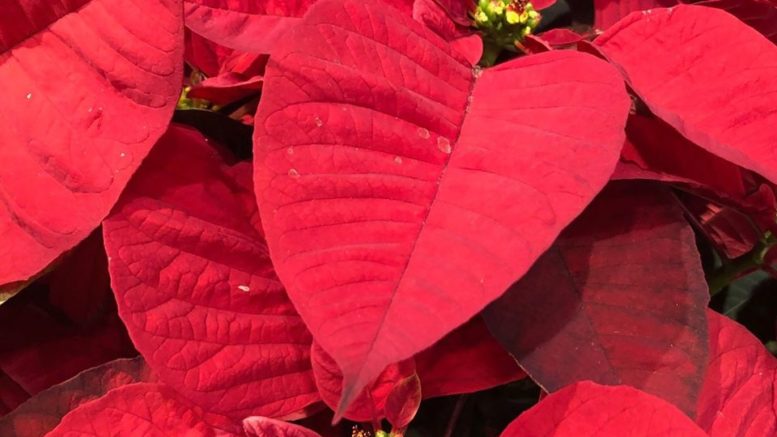 The star-like flower is a holiday favorite, especially in red

Christmas in California wouldn’t be the same without that star-like flower. Potted poinsettias in full bloom have been part of our holiday tradition for generations.

We’re not alone in our poinsettia passion. A popular gift, poinsettias rank as the top-selling potted plant in the United States and Canada, totaling more than $250 million in sales each holiday season. (In Mexico, they grow wild and are sold as bouquets.)

In Sacramento, most of those potted poinsettias got their start in one spot: The greenhouses at Eisley Nursery in Auburn.

“We grew 28,000 total this year—how’s that for a number?” said Earlene Eisley-Freeman, retail manager of the family-run nursery. “That’s about the same as last year.”

Celebrating its 87th anniversary this year, Eisley Nursery has been growing potted poinsettias for the Sacramento market for at least half a century. Its plants are sold in retail nurseries, florist shops and other outlets throughout the region.

One thing has remained consistent all those decades: People want red.

“Red is by far the most popular,” Eisley-Freeman said. “Red is what people buy most, but we do grow them in 12 different ‘flavors.’ There are more varieties than plain red.”

Besides the familiar fire-engine crimson, poinsettias can range from paper white and pale yellow to flashy pinks and deep-wine tones. Some varieties have curled or ruffled petals; others are splashed with contrasting colors.

Nursery patriarch Earle Eisley, whose mother founded the nursery in 1932, has a poinsettia pick with a difference, too. “Dad’s favorite is Ice Punch,” Eisley-Freeman said. “[The bracts] have pink centers and red borders. It’s really pretty.”

This season, the poinsettias look especially nice, she noted. “They seemed to like the weather. Actually, they colored up real good.”

Of course, Eisley’s poinsettias stay indoors, out of the wind or rain.

“In Sacramento, they are indoor plants only,” Eisley-Freeman said. “On a sunny day, maybe you can put them outside for a few hours. But they won’t be happy.”

Native to temperate coastal areas with winter highs in the 70s, poinsettias can be finicky. A member of the euphorbia family, they can’t take too much cold or heat, preferring temperatures between 65 and 75 degrees.

In Southern California, poinsettias can be grown outdoors, where they reach 10 to 12 feet in height. “People move up here and they think they can still do that,” she noted. “But it doesn’t work up here.

“In Hawaii, they grow them as hedges,” she added. “The first time I went and I saw them, I stopped the car to look! What was that red flower? I couldn’t believe it.”

Instead, we Sacramentans are content with our potted poinsettias and the smiles they bring each December.

“It’s a Christmas tradition,” Eisley-Freeman said. “Grandma used to have them; now we get them, too. It’s the favorite for the holidays, part of our decorations and makes a great gift. It’s the Christmas flower.”