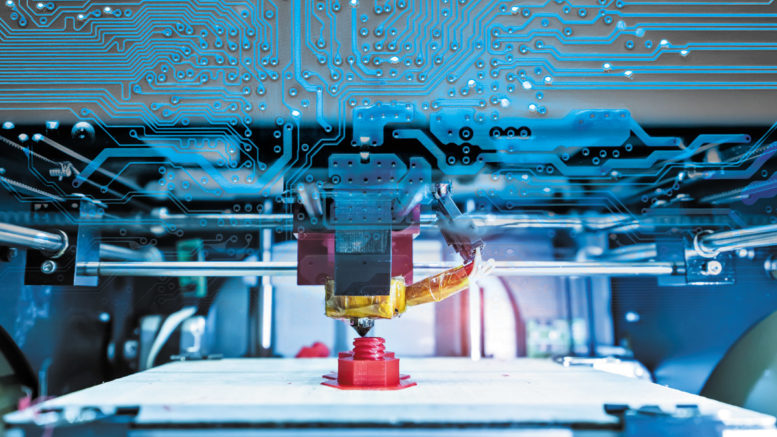 Amid growing concern over 3D-printed firearms, one tech start-up sets out to help authorities detect them

The shooting happened so fast that three off-duty officers rushing toward it couldn’t make a difference.

Last month at Saugus High School, California’s 21st mass shooting since 1982 left two victims dead and three wounded among the brushy hills of Santa Clarita. With a trio of officers heading straight into that chaos, the causalities were a jarring reminder of how fast tragedy comes once a gun starts firing. The campus has high fences and security cameras, but it’s not one of the 3% of American schools that currently use metal detectors. But even if it had taken that precaution, it may not have been enough.

According to the Los Angeles County Sheriff’s Department, the student shooter used a self-manufactured handgun, also known as a “ghost gun.”

Not only do ghost guns exist outside conventional safety measures—background checks, restraining orders, general traceability—a new customized breed can now be made almost entirely of plastic. Some are forged by advanced computer numerical control milling machines, while other versions have been made with 3D printers. At least some of them have already slipped through metal detectors. In fact, investigative journalists report having been able to sneak a 3D-printed gun through the security system for the Israeli parliament—twice.

Hand-assembled ghost guns have been used in three mass shootings in California so far. But as more commercial machinists obtain CNC mills—and as 3D-printers become more advanced, affordable and accessible—untraceable plastic firearms may become the dominant threat to public safety.

“The 3D-printed guns are part of the larger ghost guns phenomena, which is an escalating and increasingly alarming issue in California, specifically because of our strong gun laws,” said Amanda Wilcox, legislative and policy chairperson for the California chapter of Brady United Against Gun Violence. “The more there are people who want guns but can’t meet our standards, the more there’s people just trying to make their own guns.

“With the 3D printers, it seems like the technology will improve and become a bigger problem,” she added.

In response, a start-up in Vancouver is testing a new technology that uses low-frequency radio waves and artificial intelligence to detect hidden guns in real time via advanced 3D imaging. According to the company’s CEO, Bill Riker, these devices use deep learning to locate all kinds of concealed weapons—including plastic ghost guns. Riker describes his team as using one type of three-dimensional technology to neutralize another.

“Our mission is to improve the safety and security of communities,” Riker said.

Sacramento County probation officers were checking on George Vang, previously convicted of illegally possessing firearms, when they discovered he was trying to create a gun with a 3D printer in August 2018.

In a statement, the Probation Department noted that the 3D-printed gun didn’t work. It was too hard to make, Vang reportedly admitted, so he’d finally given up.

The previous summer, police in Grand Prairie, Tex., experienced a closer call. Responding to shots fired near a roadway, officers discovered Eric McGinnis with a working AR-15 rifle that he’d partly constructed with a 3D printer. McGinnis was also carrying a list of addresses for federal lawmakers. He had previously been convicted of carrying an illegal short-barrel rifle with no serial number while being restricted from possessing any firearms due to a restraining order.

Evidence presented at his trial for the latest incident showed he’d circumvented that restriction by using a 3D printer to make a lower receiver—a major component in assault rifles—and then fixing it on a traditional upper receiver he’d acquired through other means.

Computer files for printing 3D guns began leaking online in 2013. Simple schematics were widely released by Texas-based Libertarian activist Cody Wilson, while more sophisticated designs were sold to the public by the company Solid Concepts. By the following November, a machinist from Pennsylvania was sharing plans online for a fully functioning 3D-printed gun made of plastic, one that reportedly could fire multiple rounds.

Several firearm experts told SN&R it’s still widely believed that plastic guns can only fire one to four rounds before their barrel cracks or deforms. But it’s also believed this design flaw could be temporary as more 3D printing enthusiasts experiment with different hard plastics and polymers.

In the last few years, 3D printers have become ubiquitous on college campuses, used in architecture labs and fashion design classes, among other settings. But they’re not miracle machines, cautions Nile Mittow, who has been using 3D printers for six years while working at Sacramento’s Hacker Lab.

Mittow says he’s met plenty of people who mistake 3D printers for “Star Trek replicators,” meaning a machine that can manufacture any requested object out of thin air.

“These are not consumer-idiot-proof,” he said. “If you want to 3D-print something [plastic] that’s going to contain a small explosion, you have a better chance of hurting yourself with it than somebody else.”

Mittow explained what’s so complicated about using 3D printing technology: “There’s two main parameters with this—the temperature of the nozzle and the speed at which you’re printing—but there’s a lot of weird parameters with it, too. It’s easy to print a simple piece of plastic that looks like something, but it’s a lot harder to get something dialed in to where you can hit tolerances, and get actual mechanically reacting parts within it.”

While making 3D plastic guns requires sophistication, experience and money—advanced 3D printers can cost upwards of $15,000, and CNC mills $27,000—recent history shows lone wolves and terrorists will go to extravagant lengths to carry out their attacks.

The deadly assault on Saugus High School marked the Golden State’s eighth campus shooting in three decades and fourth since 2012.

Those figures don’t include the four people shot, one fatally, at San Diego’s Chabad of Poway Synagogue in April. Nor do they reflect the three people killed and 17 wounded at the Gilroy Garlic Festival in July. The bloodshed has left many wondering if any place is safe.

Knowing that the threat could accelerate as the technology becomes cheaper, Liberty Defense is focused on developing Hexwave.

First created by Massachusetts Institute of Technology’s Lincoln Laboratory, Hexwave is designed to use low-powered, 3D-imaging signals to scan and classify every moving object within a given area, and differentiate weapons from benign objects in real time. CEO Riker says that Hexwave’s A.I. constantly scans for the shapes of guns, knives and explosives.

“It can tell the difference between those and a set of keys,” Riker explained. “We’ve also been refining it to see plastic guns and 3D-printed guns.”

Hexwave is being honed to work at public events, school campuses, places of worship and secured buildings. Riker says that when the technology detects a concealed weapon, it can instantly notify law enforcement or security personnel in the vicinity, or work in tandem with a facility’s alarms and automatic lockdown systems. Liberty Defense is currently beta-testing Hexwave in Utah, Georgia, Virginia, Maryland and parts of Canada. If that goes smoothly, the company expects to go to market in 2021.

Some schools or municipalities could face privacy concerns over using a technology like Hexwave. Yet the Utah Attorney General’s Office has told reporters that it’s allowing Liberty Defense to test its scanners at public events because law enforcement is looking for innovations that can keep large crowds safe in a way metal detectors simply can’t.

Riker says that’s what makes his company’s tech so promising.

“The United States has now had hundreds of mass shootings,” he pointed out. “There has to be a way to take quicker, more proactive action.”

Gripping ghost guns: The death trail of weapons that are untraceable, unrestrictable and so far unstoppable

Be the first to comment on "The future reloaded"