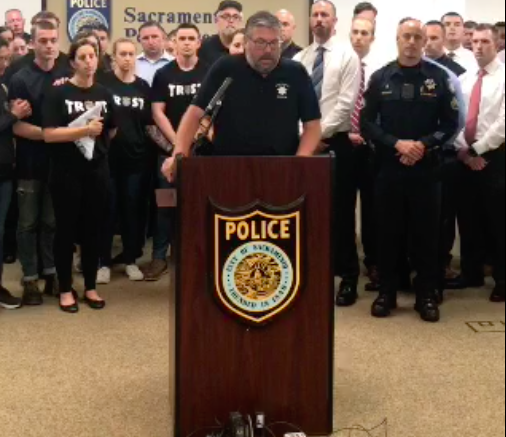 Denis O’Sullivan addresses reporters with his family and his daughter’s fellow officers behind him last week in Sacramento police headquarters.

What did Sacramento police know before they went to the home of a heavily armed cop-killer?

Responding to unspecified criticism against the Police Department that employed his daughter, Denis O’Sullivan stood in front of a podium last week to say only one person is to blame for his child’s death.

That man is accused cop-killer Adel Sambrano Ramos, 45, who police say had a stash of firearms and a murderous intent to use them when officers came to his Noralto neighborhood house on a domestic violence-related call.

“What happened on June 19 falls squarely on one individual,” O’Sullivan told reporters only six days after his 26-year-old daughter, Sacramento police Officer Tara O’Sullivan, was shot while assisting a woman retrieve her belongings from Ramos’ home.

O’Sullivan lay mortally wounded in the suspect’s backyard for nearly 45 minutes while, police say, the suspect blasted rounds from two assault rifles, a shotgun and a pistol, all strategically placed around his house. Crisis negotiators finally persuaded Ramos to surrender the following morning, after a siege that lasted hours. By that time, the rookie officer was already dead.

While Ramos was arraigned last week on murder and gun charges, questions remain about what officers knew or should have known before approaching his Redwood Avenue residence.

“I think the question in this case is what were they able to see before they went to the home,” said Julia Weber, a Giffords Law Center to Prevent Gun Violence fellow. “In sort of an ideal world, the person taking the call should ask, ‘Well, does he have firearms?’”

Police spokesman Sgt. Vance Chandler didn’t respond directly to that question, but said at last week’s press conference that detectives still had much work to do.

“Our investigators are determined to find all of the answers for Tara’s family, for our entire Police Department and for our entire community,” he told reporters.

Weber added that reporting parties—those who contact police—are “often a reasonable source of information, but they may not volunteer that if they’re not asked.”

When it comes to guns, that may be because of how common they’ve become.

“Firearm ownership has increased significantly in California, and people in these houses may not be able to assess the potential danger of that,” Weber noted.

According to a 2018 survey by the UC Davis Violence Prevention Research Program, a quarter of California adults live in a household where there is a gun.

At the time of the call, Ramos faced an active criminal complaint that he threw a deflated basketball into the chest of a neighborhood youth, The Sacramento Bee reported. If he had been court-ordered to stay away from the juvenile, a civil protection order, or CPO, typically includes boilerplate language that would have made it illegal for Ramos to possess guns, explained Weber, who concentrates on gun violence restraining orders.

“Those CPOs automatically include firearms and ammunition prohibitions,” she said.

Ramos also has a 20-year-old conviction for misdemeanor battery that would have prohibited him from possessing firearms for 10 years, according to California Department of Justice criteria. Asked if those firearm prohibitions should be toughened, Weber suggested caution. If the laws become too restrictive, she said, victims may not come forward.

“Policy in this area can have unintended consequences,” she said. “It’s a balancing act.”

For Weber at least, it’s not about adding laws so much as it is about enforcing the ones that are already exist.

“We have really good policies in California,” she said. “From my vantage point, it’s really if we have the resources to fully implement them on the front lines.”

Two days after O’Sullivan’s death, a Bee article quoted a New York law enforcement expert who criticized the amount of time it took police to extricate their wounded officer from the line of fire and get her medical attention. During his June 25 statement to the press, Denis O’Sullivan said that he, his wife and two surviving children had come to address “negative, misleading and hurtful information that has been spread about our Sacramento Police Department family.”

Denis O’Sullivan described his daughter, who was raised in the East Bay city of Martinez some 60 miles south, as falling in love with Sacramento during college. Last week, during a widely attended service, O’Sullivan was laid to rest not far from her adopted home, in Elk Grove.

An unpredictable call. A heavily armed suspect. An ambush that leaves police searching after the death of Officer Tara O’Sullivan.

Be the first to comment on "Armed and unknown"