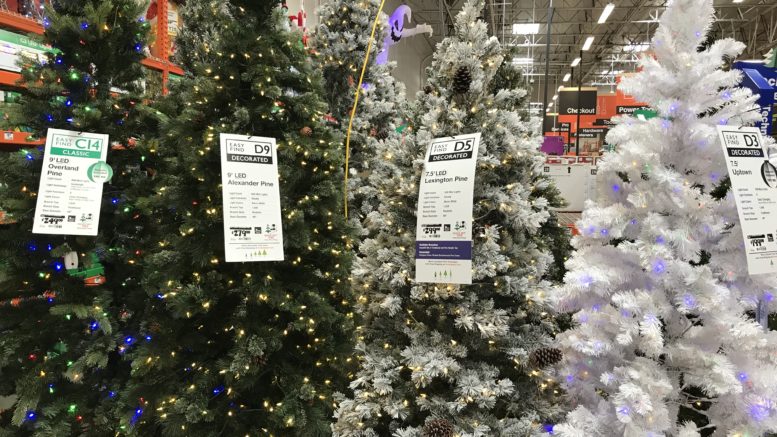 A display at a Home Depot in Sacramento of artificial Christmas trees. (Photo by Foon Rhee)

When I was growing up, artificial Christmas trees were all the rage, especially ones painted with white “snow.” The 1970s could be so tacky and not so environmentally friendly.

In today’s climate change era, you might think that live trees are in style and that plastic ones are on the naughty list.

Or maybe not: While annual sales of natural trees have stayed in the 30 million range, fake tree sales have more than doubled since 2004 to 21 million.

Jeri Seifert, president of the California Christmas Tree Association, says it takes a lot of education to convince consumers that a live, traditional tree every holiday season can be good for the planet.

They wouldn’t be grown otherwise and in the decade it can take for Douglas firs, blue spruces and noble pines grow to sale size on Christmas tree farms, they’re taking in carbon dioxide and releasing oxygen. A recent study says even more carbon is trapped in the soil surrounding the trees. It’s even possible to get a tree with roots intact so it can be planted outside after the holidays. Worst case, live trees can be recycled as part of yard waste.

On the other hand, artificial trees can last for decades, and plastics are among the most troublesome materials to try to recycle. In response, conservation groups pushed several significant proposals in the Legislature. But the most sweeping measure—to require businesses to reduce or recycle at least 75 percent of single-use plastic packaging or products by 2030—didn’t pass. And Gov. Gavin Newsom vetoed a bill that would have required plastic drink bottles to contain at least 50% recycled content by 2030. So advocates are hoping to put a plastics reduction measure on the November 2020 ballot.

In artificial trees, the plastic is often fused to the metal frame, which means it can’t be recycled. Those from China often are made from PVC, a type of plastic that is not biodegradable and that can release toxins.

But the American Christmas Tree Association, which represents artificial tree companies, stresses potential problems with live trees, including pests, water use and fire hazards. It also promotes a study that concludes that if an artificial tree is used for at least five years, it has a “more favorable environmental impact.”

“Unlike living trees, artificial Christmas trees are an investment,” the association says on its website. “This means that spending a few extra dollars can end up saving you money in the long run.”

While live trees cost about $75, depending on the type and where you live, artificial trees cost a little more than $100, though there are more expensive, fancier models. At a Home Depot in Sacramento, for instance, a 6 ½-foot tree recently listed at $99, while 7 ½-foot decorated trees retailed for $199 to $299.

With its marketing power, the artificial tree industry is difficult to fight, says Seifert, who owns Silveyville Farm, a Christmas tree and pumpkin operation that opened in 1979 in Dixon. She grows about 14 acres of pines and cedars and also brings in several hundred firs from Oregon, and says that she sells out.

“People are going more green,” she said. “The industry is coming back. But it’s going to be a long haul.”

Be the first to comment on "Editor’s note: Have a green holiday"