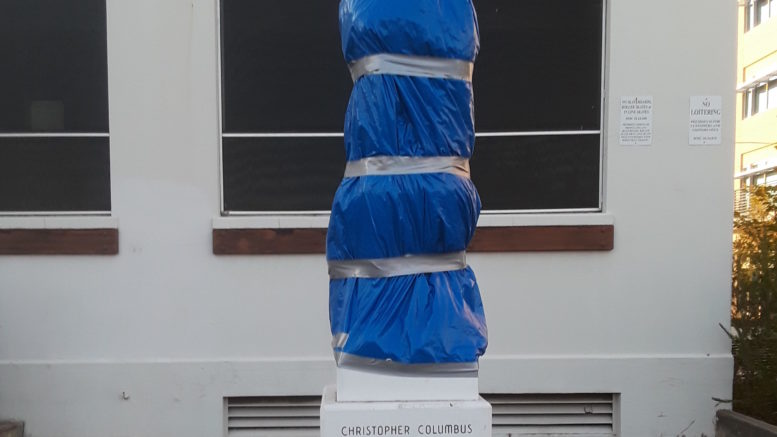 A statue of Christopher Columbus in Roseville was covered up during Columbus Day weekend. (Photo courtesy of Jose Gonzalez)

Roseville must remove a statue of Christopher Columbus

For nearly three years I have reached out multiple times to the Roseville City Council to push for the removal of the Christopher Columbus statue in front of a post office and across from the civic center. The first city council I asked did not register a heartbeat, while the current one has only registered a dim pulse.

The Columbus statue was donated to the city in October 1976 by the Sons of Italy, a now defunct entity. Although I had driven past the statue numerous times, I never gave it any attention. It was not until the Columbus Day weekend three years ago that I realized the statue honored Columbus. I was stunned.

I had just started exploring Columbus the previous month. While at Sacramento State University’s library, I found a book, Confronting Columbus, that opened my mind to the atrocities committed under Columbus in the West Indies. The more I read, the more troubled, sickened and horrified I felt.

Columbus initiated centuries of genocide against indigenous populations throughout the Americas, including California. He began the trans-Atlantic slave trade when he returned to Spain after his first voyage across the Atlantic with a handful of Taino survivors. Altogether, hundreds of indigenous slaves were taken across the Atlantic. Under Columbus, Tainos as young as 14 that failed to meet their gold quotas had their hands chopped off. Those that ran off were chased down by dogs. Living conditions for the Tainos became so atrocious that many died of starvation or suicide. Eventually, as a result of hundreds of thousands of indigenous deaths due to violence, disease, starvation and suicide, African slaves were shipped to the West Indies to replace them.

Meanwhile, Roseville is waiting for the sale of the post office property to be finalized before relocating the Columbus statue. The city has reported that it plans to reach out to neighboring cities to take in the statue. Destroying it is not an option as it is considered to be art.

The city is well aware of the controversy surrounding the statue, and covered it up during the Columbus/Indigenous Peoples’ Day weekend to protect it from being vandalized. It has been vandalized multiple times, which explains why it is missing its nose.

Although I do not know where the statue will end up, I do know an increasing number of people do not want it in a public venue. The statue is especially offensive to our indigenous, Latino and African-American populations.

I encourage Roseville council members to study Columbus. Doing so will help them understand why so many find the statue so offensive and why it should be permanently removed.