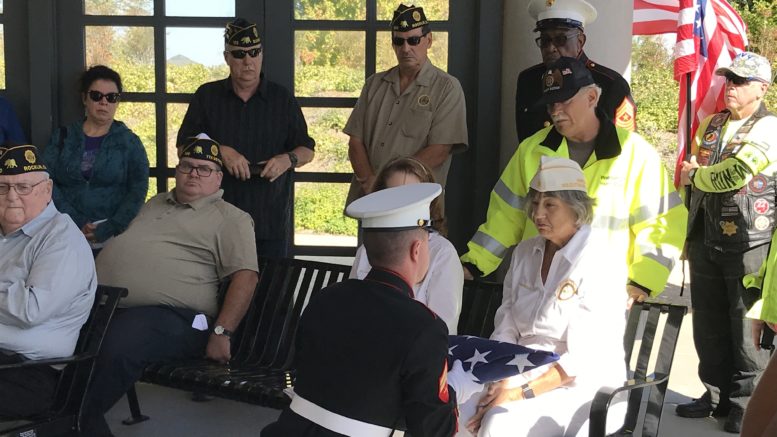 Karen Meredith, president of the Northern California department of American Gold Star Mothers, is presented with a flag during an Oct. 9 ceremony at Sacramento Valley National Cemetery. (Photo by Foon Rhee)

A solemn ceremony serves as reminder of Veterans Day

When I started work in Sacramento, America’s war in Afghanistan was surging; the 498 U.S. deaths in 2010 are the most of any year. But there wasn’t a lot of news coverage on what happened to service members when they came home.

So I put myself on the veterans beat and wrote a series of columns about brain injuries, education, PTSD, suicide, rehabilitation, unemployment and long wait lists for VA benefits and health care.

I got to meet some inspirational veterans: Palmer Spurlin, a Korean War vet waiting for the state veterans home in Redding to open; staff Sgt. Kelly Strong, an Iraq War vet with a traumatic brain injury being cared for by his wife; and T.J. Norton, who graduated from Pathway Home, a program for troubled vets that was shut down last year after three mental health workers were killed by a former patient.

Today, America’s longest war—18 years and counting—is still simmering; there have been 21 U.S. fatalities in Afghanistan so far in 2019, the most since 2015 and bringing the total to 2,438 deaths, according to icasualties.org.

As we approach Veterans Day on Monday, Nov. 11, veterans still aren’t getting the attention and help they need and deserve.

One windy afternoon last month, I went to Sacramento Valley National Cemetery for its quarterly ceremony to honor 159 veterans who had been interred without any family present.

About 75 graying veterans gathered for the Oct. 9 ceremony from Citrus Heights, Fairfield, Rocklin and elsewhere in Northern California.

“It’s important to never forget,” said Jeff Jewell, an American Legion district commander and Air Force veteran who happened to be retiring that day after 32 years as director of the VA’s Concord Vet Center. “It is my honor to be here as my final act.”

Members of American Legion Post 637 in Citrus Heights saluted a final farewell. For 21 minutes, veterans read out each of the 159—name, rank, service branch, when they served.

Fifteen years ago, she mourned her son—1st Lieutenant Ken Ballard, who was killed in Iraq in May 2004—at Arlington National Cemetery. “This isn’t a whole lot easier,” she said afterward.

Sacramento Valley National Cemetery, in the middle of fields and orchards near Dixon, opened in 2006. Already, about 38,600 veterans and family members are interred there, marked by line after line of white gravestones. There are still 17,000 grave sites left, and that number will grow to nearly 47,000 in two years after an expansion. Eventually, all those grave sites will be filled, too.

The final members of the Greatest Generation are passing away; of the 16 million Americans who served during World War II, less than 500,000 are still alive. Korean and Vietnam war veterans are also dying in increasing numbers.

We’ve had an all-volunteer military for decades now, and less than 1 percent of Americans are now on active duty. Veterans make up about 7% of the adult population, down from 18% in 1980.

The least the rest of us can do is honor them on one designated day.

Be the first to comment on "Editor’s note: Never forget"