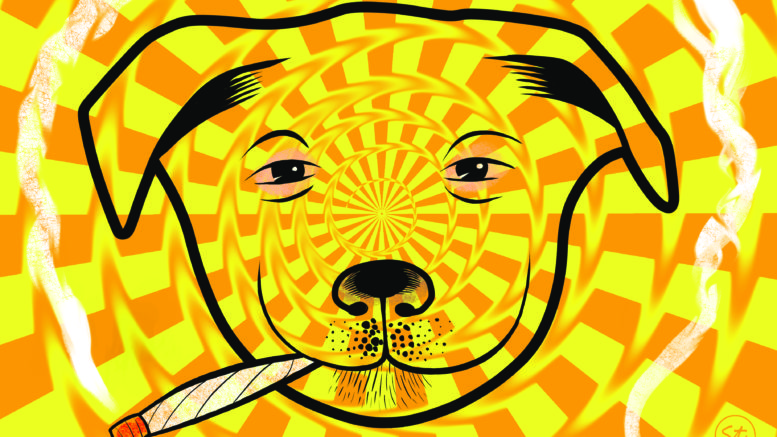 In May, the state Senate voted 33-0 for a bill to allow veterinarians to recommend cannabis medication for pets. (Illustration by Mark Stivers)

Proposed legislation at the state Capitol and Capitol Hill could make changes, big and small, in the cannabis industry.

There is a lot going on in the world of cannabis, especially on who can access the versatile plant legally. Changes in legislation, whether big or small, are in constant flux from California to Capitol Hill. SN&R highlights some of the major shifts that could impact veterans who have served our country, our four-legged friends and many others.

Pets need to chill, too

In May, the state Senate voted 33-0 for a bill to allow veterinarians to recommend cannabis medication for pets. Senate Bill 627 grants veterinarians the same protections as doctors who recommend marijuana for human patients. Pet owners must be at least 18 years old to purchase cannabis-related products for their pets as long as they have a veterinarian’s recommendation. The bill is now before the state Assembly.

On July 1, Gov. Gavin Newsom signed Assembly Bill 97, which includes a provision that allows anyone who had a temporary license expire before they could get a provisional license to have more time to get that approval. Basically, applicants are no longer required to hold or have held a temporary license to obtain a tentative commercial cannabis license. The change primarily benefits the California Department of Food and Agriculture as it issues far more cultivation licenses than any other license type, according to Alex Traverso, chief of communications for the state Bureau of Cannabis Control.

“The Bureau hasn’t had any temporary licenses expire, but for us, this enables us to issue provisional licenses to those operators who were never able to get a temporary license due to their city or county not having a commercial cannabis ordinance in place prior to the end of the temporary licensing period [on] December 31, 2018,” he told SN&R via email.

Applicants can now submit a completed annual license application to the bureau with evidence that their business would be in compliance with the California Environmental Quality Act and also local ordinances. If interested applicants have yet to submit an annual license application, register an account on the bureau’s online self-service portal. http://online.bcc.ca.gov/.

On Tuesday, a U.S. Senate hearing was scheduled to discuss the details of the SAFE Banking Act, which would give cannabis-related businesses access to bank accounts. Many businesses, such as dispensaries, operate on a cash-only basis as banks are regulated by the federal government and cannabis is still an illegal substance under federal law.

“This is something that is a ubiquitous problem throughout the cannabis industry,” said Morgan Fox, media relations director for the National Cannabis Industry Association, one of the bill’s backers. “It’s very expensive to be able to find a bank that is willing to work with you and they always charge exorbitant fees … That creates a serious hurdle for particularly marginalized communities to be able to enter the industry.”

Fox added that cannabis businesses with large amounts of cash on hand, including dispensaries and delivery services, create a public safety issue that could easily be resolved if these companies were allowed to have some form of banking.

“These businesses are not banks. They’re not necessarily designed to be able to hold large amounts of cash,” Fox told SN&R in a phone interview. “And it’s not just the businesses. Oftentimes, employees are denied bank accounts simply for working for the cannabis industry.”

With 30 cosponsors, the SAFE Banking Act appears to have some momentum, but it still has a ways to go through the legislative process. Senate Majority Leader Mitch McConnell, who has blocked previous cannabis reforms, will have to give his approval before the bill is sent to the Senate floor for a vote.

Governed by the state

The U.S. House approved a measure in June that would prevent the Department of Justice from interfering with state marijuana laws, whether recreational, medical, cultivation or sales. The amendment also protects cannabis laws in Washington, D.C. and other U.S. territories, and is now attached to an appropriations bill that would fund parts of the federal government in 2019-20. The amendment, which passed 267-165, appears to have strong Democratic support. A majority of the GOP opposes it, though 41 Republicans voted in favor.

A series of bills that would help veterans gain legal access to medical marijuana through their Veterans Affairs doctors were opposed in late April. As cannabis is still a federal controlled substance, the U.S. Department of Veterans Affairs came out against the bills.

Still, it was the first time a series of bills about cannabis and its potential medical uses were discussed during a congressional hearing. The bills had the support of veterans organizations such as Iraq and Afghanistan Veterans of America. IAVA’s research director, Stephanie Mullen, testified about the need for more medical cannabis research. One of the three proposed bills, the VA Medicinal Cannabis Research Act, would have required VA doctors to actually study cannabis. The other two bills that got the ax: The Veterans Equal Access Act, which would have allowed VA physicians to recommend medical marijuana for veterans living in states where it is legal. And, the Veterans Cannabis Use for Safe Healing Act, which would have protected veterans’ benefits if they were found to have used marijuana for medical purposes. Now, VA doctors are only allowed to discuss medical marijuana with their patients and document it in medical records.

Be the first to comment on "What’s new, cannabis?"