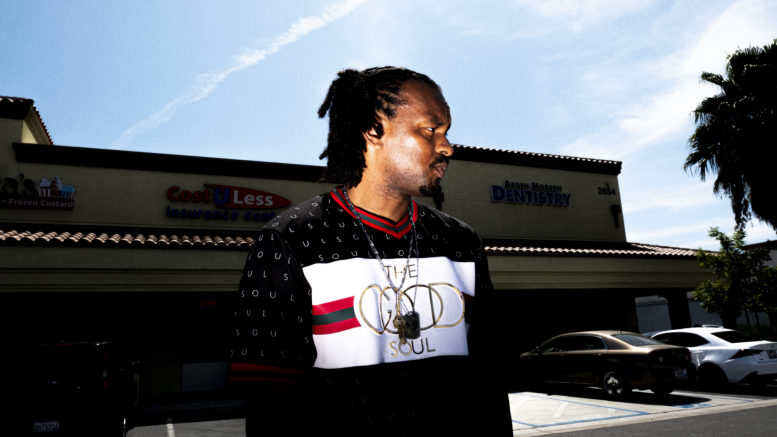 Richard Williams could have been a candidate for DA’s conviction review unit, but instead he had to overturn his own guilty verdict

Richard Alex Williams Jr. surrendered his youth to a 6-by-8-foot time machine, one that doesn’t travel through time so much as let it crawl by.

Williams entered a jail cell in 1996, when he was arrested for the shooting death of a 17-year-old paused at a stop sign. Williams exited a jail cell 17 years later, once his conviction had been overturned and he was acquitted in a new trial.

Even though he’s lived nearly four years as an innocent man, Williams is still catching up to a world that didn’t wait for him.

“After 20 years confined, mentally you be one way,” Williams, now 41, told SN&R. “I was 18 when I got locked up, so my view maybe about what’s cool and what’s happening—it’s still the same.

“So when you get out … it’s a culture shock,” Williams continued. “Especially with a lot of the homelessness being higher than what it was, a lot of drug use and abuse is higher in my neighborhood. … It’s just so much to take in.”

There have been other increases, as well. Williams is one of 2,488 exonerated Americans and at least the fifth Sacramento resident to be exonerated of their crimes since 1986, according to the National Registry of Exonerations.

And while the Sacramento County District Attorney’s Office, which put the individuals away, created a unit in 2013 to examine claims of wrongful conviction, it hasn’t uncovered one case it would do differently, including Williams’ or that of Zavion Johnson, wrongfully convicted in 2002 of killing his infant son due to false or misleading forensic evidence.

The men share a few things in common: Both were teenagers when they were arrested, both are African-American and both spent more than a dozen years in prison protesting their innocence.

On a recent Wednesday afternoon, inside the waiting room of Arden Modern Dentistry, which provided free dental work to two exonerated Northern California men, Williams sat in front of a wall displaying perfect smiles. He’d never heard of the DA’s “Justice Training and Integrity Unit,” but didn’t think it would have made a difference if he had.

“It was too political at that point,” Williams said.

The number of prosecutor-run conviction review units has steadily risen around the country, yet the number of prosecutor-initiated exonerations hasn’t kept up. Which begs the question: As Americans become more concerned with reforming a criminal justice system they believe went overboard during the 1980s and 1990s, are the prosecutors they elect actually taking that message to heart, or simply pandering to it?

Conviction review units, which started proliferating around the turn of the 21st century, can form for different reasons, said John F. Hollway, associate dean at University of Pennsylvania Law School and executive director of the Quattrone Center for the Fair Administration of Justice. But increasingly, Hollway said, the units are being created by DAs who acknowledge the public wants more from them than the enthusiastic dispensation of punitive justice.

“There were a lot of units that didn’t get started because they thought there was something rotten in Denmark,” said Hollway, author of the 2016 paper “Conviction Review Units: A National Perspective.”

Hollway said not to discount the monkey-see-monkey-do marketing impact. As more counties adopted these units, officials in nearby jurisdictions wanted to show that they were just as woke.

“There’s close to 50 of them around the country,” Hollway said. “The effect has been both practical and philosophical.”

Around the country, the units were involved in a total of 269 exonerations through 2017, including 42 exonerations that year and a record 72 exonerations in 2016, according to the National Registry of Exonerations. Conviction review units were responsible for exonerating 40 people last year alone, Hollway noted.

But most of these exonerations were initiated by defense attorneys, innocence organizations, journalists and others, the registry found, raising the question of how proactively the units are actually looking for past mistakes or outright corruption.

While exonerations were fewer in 2017 than the previous record-setting year, 2017 did set records for the number of murder exonerations based on official misconduct and false confessions.

Yet more than a third of the units haven’t been involved in any exonerations, including the two units in Northern California. In the six years it has existed, the Sacramento County DA’s unit has reviewed approximately 50 convictions, deeming none worthy of exculpation, a spokeswoman said in May.

Between 2013 and 2017, the Yolo County DA’s unit also hadn’t found a false conviction, according to the registry. Yolo County DA Jeff Reisig and his staff didn’t respond to multiple requests for recent activity.

Yolo County Deputy Public Defender Dean Johansson unsuccessfully tried to unseat Reisig last year. He acknowledged he doesn’t have direct knowledge on how—or whether—the DA’s unit operates, but offered the perception that it was just another “of these surface, lip-service operations.”

“The bottom line is I don’t know of any time that they’ve ever questioned or overturned a decision,” Johansson said.

Around California, conviction review units reflect a mishmash of approaches. The San Diego County DA’s unit has only one full-time staff member, while Orange County’s “Conviction Integrity Function” and the units in Yolo, Nevada and Merced counties have none. Perhaps coincidentally, San Diego County has participated in one exoneration while the other counties have accounted for a total of zero.

This is one of the reasons the registry cautions that conviction review units “are not a panacea.” But Hollway, the professor, said overturning convictions is not the only measure of a successful unit.

“Exonerations are not the end-all and be-all,” he said. Just because the units aren’t discovering horrible injustices like cockroaches under an old mattress, “That doesn’t mean the unit is not operating the way we would want it to.”

Hollway acknowledged the public may be skeptical that elected prosecutors are genuinely interested in scouring their win columns for errors to right. He said the way to combat that is by establishing a unit that is defense-focused, allow for unbiased participation, and make the process as transparent as possible.

He pointed to the unit in Lake County, Ill., a beltway county outside Chicago, which convenes an advisory board made up of defense attorneys and former judges from outside the county, who are less likely to be swayed by provincial politics. In Jacksonville, Fla., the unit boasts “a very large advisory board” of 20, with five advisory members reviewing each review, Hollway explained.

He said some offices will release aggregated reports detailing the number of cases reviewed and general findings. Hollway didn’t think it appropriate for units to identify the convicted in cases where their claims were determined to be unfounded.

“You don’t want them to go, ‘We looked at it again and he’s guilty,’” he reasoned.

But Sacramento’s DA already does just that in another fashion. Every month, the office releases a list of people who have been granted early parole by the state, and summarizes its opposition to each one. As for the absence of unit-driven exonerations, Hollway said that can indicate a prosecutor’s office is operating as it should.

Just don’t tell that to Williams.

The story of Williams’ conviction is a time-tested tale of cut corners and hardwired racial bias. A couple of unsure eyewitnesses put a man who looked like Williams in a car that resembled his green Mustang on 48th Avenue and Martin Luther King Boulevard in South Sacramento, where the Mustang’s passenger fired a semiautomatic pistol at an occupied 1977 Mercury Cougar. The Cougar’s 17-year-old driver, Marvel Chase, died from a bullet to his heart.

According to hearing transcripts cited in an appellate ruling, Gold gave numerous reasons for vetoing the juror, including a 17-year-old shoplifting bust that resulted in probation for the woman when she was in college, an incident when she felt she was unfairly pulled over, her strong belief that defendants are innocent until proven guilty, and the fact that she was 38 and still single. Regarding the latter, Gold acknowledged it was “a minor point” when he addressed a Sacramento Superior Court judge in 1998.

“I sometimes have a problem with single people who have never … been married,” Gold said, according to the transcript. “They may be a very strongly opinionated person that may not work well in a group setting.”

Trial Judge Jeffrey L. Gunther upheld the juror’s dismissal and Williams was convicted of murder and attempted murder charges on Aug. 3, 1998. Williams appealed his conviction while serving a life sentence and said his first appeal was dismissed on Sept. 11, 2001. He then filed a writ of habeas corpus, which the U.S. Eastern District Court of California eventually granted in 2013 over the objections of then-Attorney General Kamala Harris, now running for president on a justice reform platform.

Magistrate Judge Allison Claire found Gold’s barrage of reasons for keeping the black woman off the jury to be undercut by multiple non-black jurors Gold didn’t object to, including one who had been arrested or charged multiple times and an alternate who believed his friends had been pulled over for “driving while black.” The magistrate determined that Gold also selectively applied his marital preference, as two single non-black women served on the jury.

“While … a prosecutor is entitled to peremptorily strike a potential juror on account of his or her marital status … the prosecutor may not use marital status as a guise to dismiss an African-American juror,” Claire wrote. The judge added that “the totality of the circumstances … support a finding that race was a substantial factor in the strike.”

A third trial that featured Williams representing himself during jury instructions ended with his acquittal in November 2015.

Today, Gold is an assistant chief deputy DA in charge of the office’s sex crimes and special prosecutions.

Williams, with a freshly capped tooth thanks to a partnership between the After Innocence nonprofit and Arden Modern Dentistry, is back in the Strawberry Manors neighborhood of his youth. A misdemeanor domestic violence case was dropped against him in 2017. The same year, the California Victim Compensation Board denied him benefits, finding that Williams failed to prove his innocence.

“If I had that evidence, I wouldn’t have been convicted in the first place,” Williams said. “It’s hard. I been going through a transition.”

Still, Williams said he never lost hope behind bars. Primarily incarcerated at Folsom State Prison, he studied the law and said he became adept at drafting complaints against prison guards and his own habeas corpus appeal.

“Now you find yourself spending [time] in the law library, being a bookworm,” he said. “Now I’m law enforcement. It flips on you.”

It was in the library that he discovered a love for baroque monetary policy. He interpreted and riffed, inventing an alternative currency system he calls digitherium. Williams described it as “Bitcoin on steroids.”

Outside the dental office, standing behind his black Chrysler sedan, he tried to explain it by pointing at his license plate. It read: “MCXIXCM.”

“My plate is the monetary structure,” Williams said. Then, noticing the blank stares, he shrugged. “Nobody gets it,” he said. “But it’s OK, I get it.”

Doing time for a murder he didn’t commit

A grisly murder. An illegal confession. A 20-year fight to be free.

Be the first to comment on "In juror discrimination case, the prosecution resists"